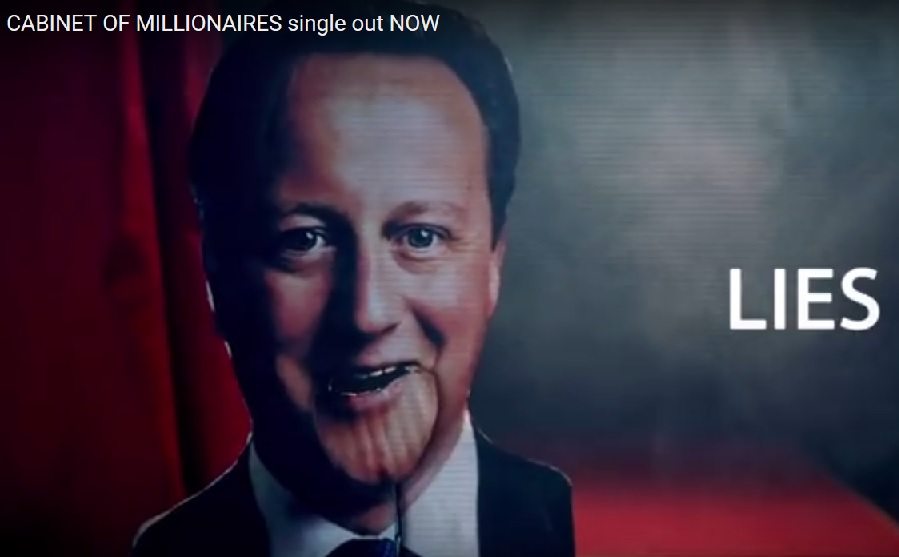 Cultural figures have often been strong proponents of political change in the past, and that is no different today. True, the music industry in particular is dominated by large corporations. However, musicians across the UK continue to capture the current societal disenchantment in unique and innovative ways.

While hip-hop artists like Akala and Lowkey have been among the most inspirational figures in recent years, there are also musicians in a number of other genres, like Billy Bragg, who are committed to questioning and criticising the political status quo. One of those artists is Pat (or ‘Dave C’) from Huddersfield.

Over the weekend, The Canary asked Pat about what had inspired his ‘Cabinet of Millionaires’ project, which focuses its energy on David Cameron and the current Tory government. Essentially, the single calls the Prime Minister a liar, referring in particular to his unfulfilled promise that “those who can’t, we will always help”.

“Political content is always a hard sell”, Pat says, but he nonetheless thought it was worth trying to get a few “disillusioned heads” to go out and vote earlier in the year. The shocking results of the elections, meanwhile, soon saw society’s most vulnerable people attacked, with Iain Duncan Smith celebrating welfare cuts as disabled activists protested against the loss of their Independent Living Fund (ILF). And it was this “heartbreaking” injustice that inspired Pat to step up his activity even more.

Calling Cameron’s promises to protect the vulnerable a joke, Pat describes life in his home town of Huddersfield as “seriously depressing”, with empty shop windows, pound shops, and charity shops popping up all around:

You can tell folks are struggling and homelessness is clearly visible. Council services seem stretched to breaking point.

However, he also speaks about the immense amount of talent in the town, stressing that there used to be numerous live community events. And he believes this situation is not just confined to Britain’s eleventh-biggest town, insisting that neighbourhoods across northern England and throughout the country share similar problems.

The fight against austerity

At the recent Tory conference in Manchester, Pat played at a ‘Love Music Hate Racism’ concert alongside Mr Scruff, beat boxers, and spoken word artists. This event, he asserts, sought to boost the resolve of both activists and the general public whilst raising money for the Calais Refugees.

Nonetheless, protest music has been less visible in recent years or, at the very least, absent from the mainstream charts and media. He says:

I’d love it if some of the modern dance genres would put the party down every now and then, and start to speak their minds a bit more too.

He has already taken on this task for himself, though, trying to broaden the reach of Cabinet of Millionaires by getting a jungle remix done by Drum and Bass veteran Loggi, and a dub remix done by Welsh dubster Ennio Maccaroni.

At the same time, he also believes theatre is a great way to get the message across. In particular, he mentions Kate Marlow’s “excellent anti-austerity play” Knock Knock, which sought to tackle serious issues like poverty and homelessness in a humorous way. Furthermore, he praises comics like Frankie Boyle and Russell Brand who, along with other comedians, have helped to “turn around hearts and minds to common sense”.

For Pat, music is the kind of thing that “helps you escape and look beyond your own circumstances”, while good lyrics can “really hit home”. From Public Enemy to Gil Scott Heron and Marvin Gaye to Bob Dylan, politically-conscious lyrics helped to shape both Pat’s own political beliefs and those of so many others throughout the world. “I know it’s not going to be everyone’s bag”, he says, but working with Tony Benn and the Campaign For Free Education showed him very clearly that conscious music was not a lost cause, and could actually work side by side with activism.

While times are hard for ordinary musicians at the moment because of the digital revolution, he insists, there is some hope for young artists wanting to get involved in protest music:

Look how many young folks have got behind the People’s Assembly and Jeremy Corbyn, especially in areas like Bristol.

At the same time, he asserts, if we’re ever going to emulate the period when music was Britain’s third biggest export and helped to “promote the country’s image abroad” in a positive way, there needs to be much more investment. The industry, he explains, is full of “well-resourced bands coming through with PR budgets and brand new gear”. For an artist from an estate, though, it’s very difficult to find enough funding.

Under Jeremy Corbyn, however, Pat feels there’s hope for increased cultural expression in the UK. To get him elected, though, he insists that “the abstaining must stop”. In a country where the poor and vulnerable in society are being targeted, he says, citizens need to understand that “austerity is a LIE” and to act in consequence. If the government always has enough money to wage wars overseas, he says, it also has enough money to fund the NHS properly, while investing in better education and housing.

Corbyn’s new tactics at Prime Minister’s Questions, Pat says, have started to “bring the Prime Minister back to reality”. Cultural resistance, though, is also an incredibly important element of the movement for greater justice and democracy in the UK.

In other words, we all have a role to play in creating a better society. And more musicians must raise their voices and get involved, for both they and their fans stand to benefit significantly from the results.

The Cabinet of Millionaires EP is available at www.cabinetofmillionaires.com.