Canadians kick out Conservatives, and Britain could too - Canary 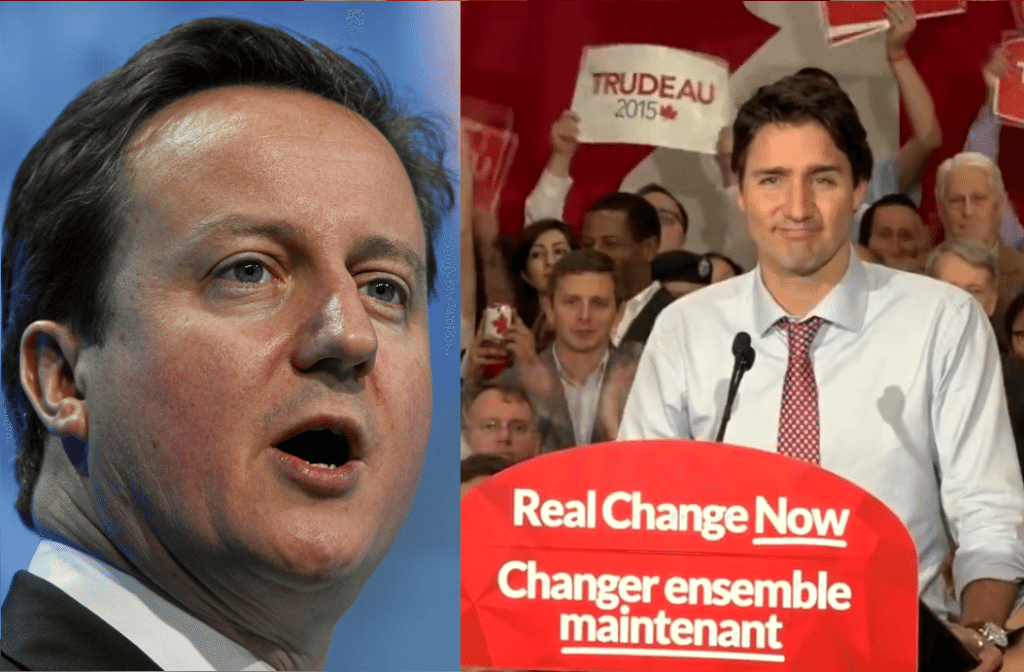 The Canadian Liberal party just won the general election, ending the 9 year reign of Conservative Prime Minister, Steven Harper. This was a landslide victory of 54%, on the back of some relatively progressive policies. Jeremy Corbyn’s victory, the Green surge and the SNP takeover in Scotland, show Britain has a similar appetite.

The Canadian Liberals were swept to power on the promise of increased public spending. They will run deficits to invest in infrastructure. The Conservatives’ simplistic economics were defeated.

The Liberals trusted the public to see beyond oversimplified deficit hype. In the UK, the SNP annihilated a ‘Tory-lite’ New Labour in Scotland on an anti-austerity ticket.

The economy is not a household. Government financial policy is not like being a parent on a tight budget, no matter how much the Tories pretend it is. While it may seem counter intuitive, you must spend money to make money. Infrastructure investment stimulates the economy, creates jobs and yields long term profits. The UK construction sector fiscal multiplier has been estimated at 2.84, meaning for every £1 spent, £2.84 is returned to the economy.

The Corbyn victory saw the biggest recorded mandate of any party leader under a coherent anti-austerity message. Well over 50,000 people have joined the Labour party since then.

Progressive Scandinavian governments – Sweden, Denmark and Norway – were running budget surpluses before the 2009 crash, not after reckless cuts, but on the back of a robust public sector and welfare system. This suggests the Fiscal Charter – running a budget surplus in ‘normal times’ – is bogus under Osbornomics. You cannot run a budget surplus after excessive cuts, only after proper investment in people and public institutions. The fact Osbourne has piled on more debt than Labour did in 13 years illustrates this.

The Liberals promised to legalise cannabis, a step up from its current status as legal for medical use. This follows legalisation in US states Washington, Colorado, Alaska and Oregon, among many others who have decriminalised. The tax revenues gained have been monumental.

It’s telling when ‘evidence based’ distinguishes one policy from the other. What is the other based on, if not evidence? In Portugal, possession was decriminalised in 2001. They then invested all the money spent persecuting people on treatment and prevention programs. 10 years later, according to Forbes, drug abuse was down by half.

In the UK, public opinion on drug policy is shifting. An Ipsos MORI poll showed support for the legalisation of cannabis. While this does not continue for other drugs, two thirds of those polled expressed an openness to debate and persuasion. The Greens claimed over a million votes in our General election, advocating decriminalising possession of all drugs and the legalisation of cannabis. Recently our Conservatives were forced to debate cannabis legalisation in parliament after a wave of public pressure. They continue to turn a deaf ear.

Jeremy Corbyn signed a parliamentary motion to decriminalise cannabis in 2001. Whether this may evolve into Labour policy is unknown. It would certainly galvanize hoards of British stoners to get out and vote for him.

The Canadian Liberals continue to look to the evidence, supporting the building of more legal supervised injection sites in Canada. This has been shown to reduce risks, such as overdosing or HIV.

The Liberals pledged to increase the marginal federal tax rate from 29 percent to 33 percent for those paid over $200,000.

Corbyn wants to make taxes more progressive. A YouGov poll found an appetite for increasing taxes on the wealthy: 56% of people (who take YouGov polls) support a 75% tax rate for the highest earners.

Meanwhile, the Conservatives issue tax breaks for the wealthiest.

Aggregate demand is crucial to a healthy economy. You can have all the products you want, but people need the money to buy them. Re-distributive policies increase the spending power of the country as a whole, rather than leaving wealth to stagnate at the top. It stagnates because the rich spend proportionately much less of their income, than the poor and middle class.

With the rise of Podemos in Spain, Syriza in Greece, the SNP in Scotland, and the Corbyn victory, the truth is catching up with ideological austerity in the West. While the Canadian Liberals are far from perfect, their victory represents a rejection of conservatism. Britain has a huge opportunity to do the same and more in 2020.