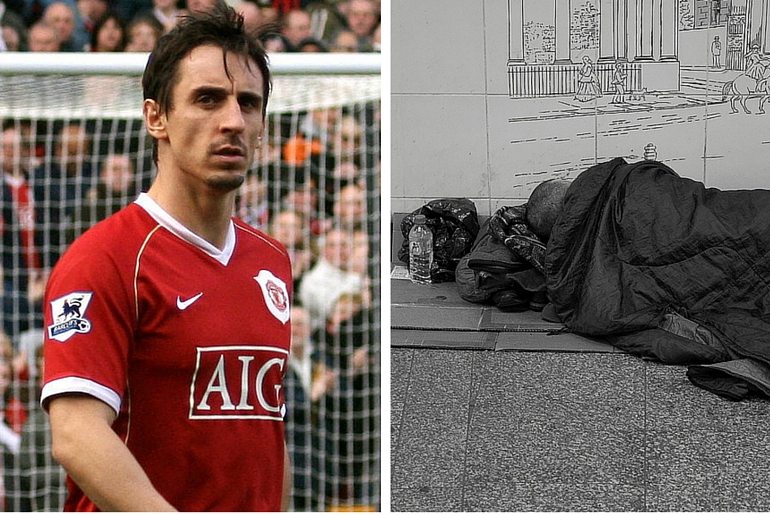 Homeless people in Manchester were given an early Christmas present from Man Utd legends Gary Neville and Ryan Giggs this week.

Neville and Giggs were in the process of developing the former stock exchange building into a boutique hotel, when it was occupied by a group of squatters. But rather than kick them out – and force them onto the streets – they worked with the squatters to provide shelter to homeless people throughout the winter months. Wesley Hall, the homeless activist who led the squatting protest, said that he was concerned people would get hypothermia.

Having this hotel means that won’t happen now. We are going to be offering all this support for the next four months with no money but lots of help from lots of people. We want to show how much we can do with no money in a short space of time.

With the rising price of energy bills, even those living in houses are struggling stay warm, with 9,500 deaths occurring as a result of cold homes each year.

Hall raised bleak concerns about the increase in homelessness.

Things have got so bad for homeless people that they think they would be better off in prison than on the streets. We want to change all that. The homelessness situation keeps getting worse. When the government rolls out universal credit next year, homelessness will reach epidemic proportions.

Giggs and Neville are not the only footballers to show such compassion. Swansea City’s Angel Rangel went with his wife to provide those on the streets of Swansea something to eat and Craig Bellamy has been praised for his dedicated and extensive charity work.

It shows that you can be a footballer and a millionaire, but still care deeply about the issues people face in society. It’s about time the millionaires in government recognised this too.