Austerity hits disabled people hardest, Cameron must be held to account - The Canary 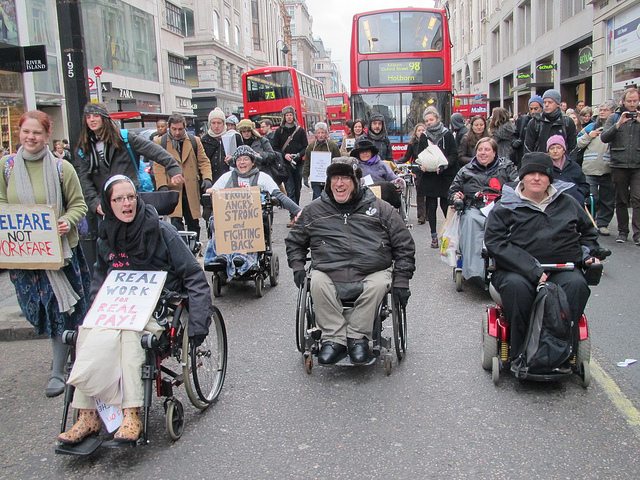 A new kind of politics saw Jeremy Corbyn raise an uncomfortable issue for the Conservative government at this week’s Prime Ministers Questions (PMQs), namely that the UK is the world’s first country under investigation for ‘grave and systematic violations’ of the human rights of people with disabilities.

“This is deeply embarrassing to all of us in this house and indeed for this country as a whole”, said the leader of the opposition as he read his final question. He went on to ask David Cameron:

Will the Prime Minister commit now to cooperate fully with the inquiry, and publish in full the government’s response to this inquiry so that we can ensure people with disabilities are treated properly, legally, and given full respect and opportunity within our society?

David Cameron proceeded to deflect the question by claiming that such inquiries “are not necessarily all that they’re cracked up to be” adding:

There are many disabled people in our world who don’t have any of the rights or any of the support they get here in Britain, and I think we should be proud of what we do as we cooperate with this report.

Accusations of human rights violations should not to be taken lightly, especially for a Western country that portrays itself as civilised and developed. Cameron can hardly brush away this issue by effectively saying ‘it’s fine if we don’t respect human rights because in any case it’s worse elsewhere’. Besides, it may be true that people with disabilities suffer worse treatment in other countries, but the UK is still a signatory to the UN’s Convention on the Rights of Persons with Disabilities (UNCRPD). As Linda Burnip from Disabled People Against Cuts (DPAC) told The Canary:

The whole point of the UN convention is that governments who ratify it, as the UK has, are then bound ‘to ensure and promote the full realisation of all human rights and fundamental freedoms for all persons with disabilities’.

Regression such as we’ve seen over and over again in the last 5 years, and the grave and systematic nature of the attacks we’ve faced is not an option that can be accepted. He may be right that we’re a bunch of ungrateful crips, but nothing less than full equality and social justice for all disabled people has to be our aim.

Eventually, it will become harder and harder for Cameron to brush off these allegations, partly because all the evidence points to the fact that these violations started happening only after he became Prime Minister, but also because of the relentless activism of groups such as DPAC, that was responsible for both initiating the historic inquiry in May 2013 and prompting Corbyn’s question on Wednesday.

In general, people with disabilities have been disproportionately affected by welfare cuts, to the extent that disabled people have been targeted 9 to 19 times more than non-disabled people.  But beyond the immediate effects of the cuts, many people with disabilities face big socio-economic hurdles that have only become steeper because of the coalition’s destructive austerity packages.

According to a report published in 2014 by the disability charity Papworth Trust, the pay gap between disabled and non-disabled people has widened by a third since 2010. Some of the major obstacles for people with disabilities include lack of proper access to education, employment, appropriate housing and transport. This means that people with disabilities are more likely to have lower living standards than non-disabled people, which can lead to a downward spiral of mental health conditions, lack of access to infrastructure and proper support and – in thousands of cases  – death.

In other words, not only have disabled people been the prime targets of austerity policies introduced by the coalition government, such as the lethal fit-for-work assessments or the absurd bedroom tax, but there has also been a complete failure on behalf of the government to enable the inclusion of people with disabilities into broader society.

And yet the main reason why the UNCRPD was set up in the first place was to hold signatory governments to account when it comes to assuring the independence, autonomy and dignity of all people with disabilities. With this in mind, it seems that the UN’s investigation is wholly justified, and should be a matter of serious concern for the Conservative Party when the report is finally published in 2017.

The UNCRPD came into being in 2008 after decades of relentless campaigning by disability rights organisations, especially in Europe and Latin America. The UK itself has a long history of disabled people taking part in self-organised resistance movements. Groups such as the Union for the Physically Impaired Against Segregation (UPIAS) began campaigning in the 1970s, and the formation of DPAC in 2010 follows in this tradition of direct action and civil disobedience. As a testament to their fightback against the coalition’s brutal ideological austerity, DPAC published From Cuts to Resistance in 2014, a freely downloadable book about the reactions of disabled people in this country against the government’s vicious cuts.

At the time of writing, the UN’s inquiry is completely confidential, which may explain the partial media silence in the UK. However the news has leaked out abroad, and DPAC has been contacted by several disabled activist groups from other countries asking for more information so that they might emulate this process against cuts their own governments are making. Regardless of the outcome of this inquiry, it will have been an important milestone in the history of disabled people’s grassroots activism.