You won't believe how easy it is to do genetic engineering at home! - Canary 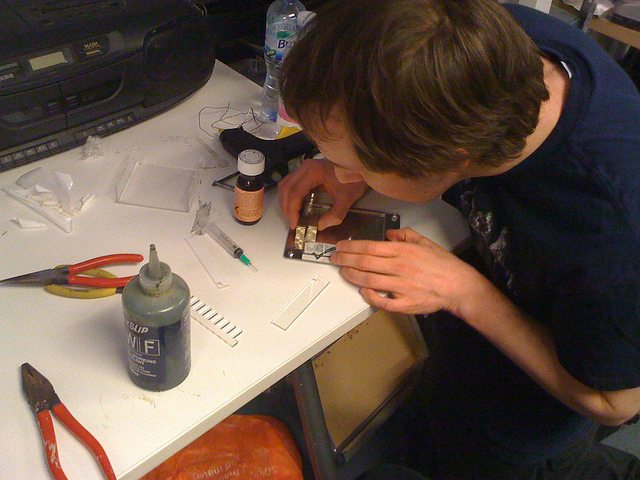 If you’ve always wanted to tinker with DNA and grow your own glowing bacteria, you might want to head over to a couple of crowdfunding sites, where biohacking has just gone commercial. The FBI, among others, has expressed concern about citizen scientists, but giving amateur biohackers access to biotechnology equipment could open doors to unexpected discoveries rather than put us under threat of bioterrorism.

Biohacking isn’t new – amateur biologists have been playing around with science in their kitchens for years (check out this homemade gene gun). But two new crowdfunded projects are taking biohacking to the mainstream, and turning people’s dining rooms into genetic engineering labs.

Enter the Amino: Desktop Bioengineering for Everyone. The idea came from Julie Legault, a master’s student at MIT whose thesis – “Amino: a domestic system for synthetic biology and continuous culturing” – resulted in a usable, accessible system for home biotinkering. In her abstract, Legault explains how a ‘90s toy sparked the idea behind the technology:

“Inspired by Tamagotchis, the genetic transformation of an organism’s DNA is performed by the user through guided interactions, resulting in their synthetic organism for which they can care like you would a pet.”

Amino is being crowdfunded on Indiegogo; at the half way point it has already far exceeded its $12,500 USD goal. And it’s not surprising, really – for $499 you can get a hand-built Amino One “with the Amino Glow App, a DNA program and the set of chemicals needed to transform the regular bacteria into a glowing organism and keep it growing and glowing! A living Nightlight!”

Amino isn’t the only new system that lets you grow glowing microbes. Head over to Kickstarter and you’ll find GlowGene, “A lab-in-a-box that lets you create cells that glow, eat plastic or create fuels etc. using DNA from other animals.” At $250 for the basic GlowGENE package, it’s a bit cheaper than Amino, but provides a different approach to bioengineering. The kit helps users cut and paste DNA from jellyfish, coral, bacteria, fungi, plants and meat, to create “new lifeforms” that glow, smell like cheese, are different colours and even create fuel.

More than 100 people think so, and have backed these two projects to prove it. So what’s the appeal? Biohacking has huge potential – it’s taking us back to the tinkering of the renaissance and could lead to some exciting new discoveries. Biohackers – or bioDIYers – are part of a global DIYer community of people who are coming up with some impressive innovations that address some of society’s most pressing challenges.

Despite a pretty impressive track record, amateur scientists have had to fight for their place in the research world, battling academics and the authorities. Even Gregor Mendel – the grandfather of genetics, and one of the original biohackers – wasn’t recognised for his work until decades after his death.

[pull_quote_left author=”David B. Wake, a professor of integrative biology at the University of California, Berkeley”]“What’s really exciting is that we’re making new discoveries with amateurs”[/pull_quote_left]

Back in 1996, The Scientist reported on the challenges amateur scientists were facing – including being denied recognition from the academic community. Then, David B. Wake, a professor of integrative biology at the University of California, Berkeley, already recognised the benefit of working with biohackers. “What’s really exciting is that we’re making new discoveries with amateurs,” he commented.

But they’re also battling against some pretty terrified authorities, who are convinced that these biotinkerers are more likely to destroy the world than save it. As a research field, synthetic biology is still developing its own regulations and carrying out safety checks, so putting the fledgling technology into the hands of non-academics is making some people twitchy.

The FBI’s Biological Countermeasures Unit keeps a close eye on biohackers, with more than 50 agents in the US keeping up-to-date with what they’re doing. In June 2012 they held the first DIYbio Outreach Workshop, which, according to Nathaniel Head, the Unit’s supervisory special agent, was to make a distinction between “harmless tinkerers” and potential bioterrorists. “We want to learn about biohacking and to be able to separate between the white and the black hats,” he told the BBC.

The FBI might see them as a potential threat, but amateur scientists think the authorities and the media are overreacting. In 2013, the Society of Biology hosted a debate entitled ‘Bioscience to bioweapons: how do we benefit from open dual-use research whilst avoiding misuse?’ One of the speakers, Daniel Grushkin – freelance journalist and vice-president and co-founder of Genspace community biology laboratory in New York – talked about the role of the “DIY community,” noting that biohacking “involves a lot of tinkering; it also involves synthetic biology.”

And this is perhaps what is making some people nervous.

“The assumption among media and policy makers is always the worst one,” said Grushkin, “which is that these guys are messing with viruses, they’re playing with DNA, playing with pathogens, who knows what… what I’m actually seeing is that the majority of DIYers are at the very beginning of their education… they’re not making novel organisms. Most of them – and this is a guess on my part – are studying the basics.”

With the two new home genetic engineering kits, it seems we’re more likely to see the odd JuicyPrint-like hack among hundreds of grow-your-own glowing night lights, rather than any dangerous genetically modified bioterror agents. It’s the world-changing hacks that Amino wants to support.

“By bringing the science out of the labs with the Amino, we are enabling everyone to take part in their own future by creating and problem-solving at home and in the DIY labs… What if many millions of people from around the world could help solve cancer, instead of a small number of scientists?”

So will you be turning your dining room into a genetic engineering lab? You’ve got until 11 November to get your own desktop bioenginneering kit from Amino or until 12 November to get a GlowGene package. Or maybe you’d like to have a stab at creating your own gene gun from some of the household items kicking around. Either way, you’ve got a better chance than ever before of having your discoveries taken seriously – who knows, your tinkering could even change the world.