Twitter users are mocking the media's anti-Corbyn hysteria at #BlameCorbyn, and it's hilarious - Canary 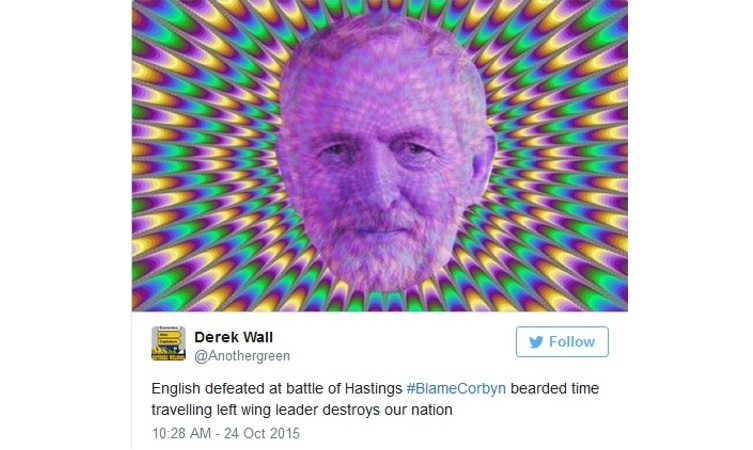 The public have responded to the anti-Corbyn hysteria of the mainstream media and political class with a whole hashtag devoted to mocking the hype, and it’s hilarious. Here are some of the very best tweets.

The hashtag came in response to a story by the Telegraph in which they blamed Jeremy Corbyn for the Conservative government’s decision to cut working people’s tax credits. That’s right, blaming the Labour leader, for Tory policy.

Jesus wept, according to the Torygraph the cut in Tax Credits is Corbyn's fault! https://t.co/Y5yVfH6how #BlameCorbyn

Shortly thereafter, it was a free for all. That poor toaster.

Not only does he not want to prevent future wars, he’s messing with past wars!

What kind of monster makes it rain on race day?

I fear F1 qualifying is going to be cancelled today due to torrential rain. #BlameCorbyn

This is rather brilliant.

#BlameCorbyn for the million-fold increase in hits on Wiktionary as people look up the word 'vindicated'.

Our personal favourite. Brownie points for working Sister Sledge into this Julia Jay!

Of course, some people had a more serious point to make.

Why are the mainstream media and permanent political class freaking out about Jeremy Corbyn? I’ve detailed that in full here. Bottom line: he represents the greatest threat to their grip on power in decades. Thankfully, it looks like a growing number of the British public are done with the status quo, and are seeing this media hype for what it is; baseless scaremongering by the gatekeepers of a morally and literally bankrupt system.