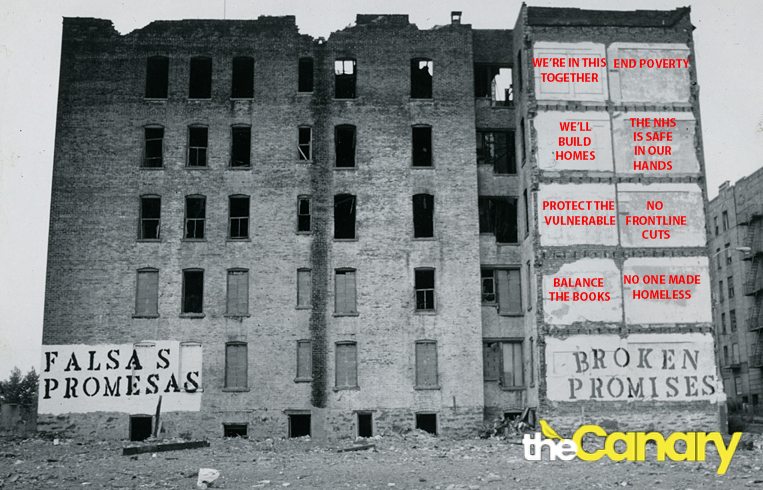 Broken Tory election promises are nothing new. ‘We’re all in this together‘ and the recent child tax credits u-turn are just the latest in a long line of deceptions.

1 Pledge: We’re all in this together. Reality: The poorest in society have paid in blood for the austerity agenda set by the Conservatives.

2 Pledge: We will balance the books by 2015. Reality: George Osborne created more debt in his first three years in office than Labour did in 13 years.

3 Pledge: There will be no front line cuts. Reality: The Conservatives have overseen the most aggressive cuts of the public sector in a generation.

4 Pledge: We will work to end poverty and child poverty. Reality: Child poverty has risen by over 300,000 as a result of Tory policies.

5 Pledge: We will protect the most vulnerable. Reality: The UN is investigating the government for human rights abuses caused by their policy reforms.

6 Pledge: We will get Britain building again. Reality: We are building fewer homes than at any time since World War Two.

7 Pledge: No one will be made homeless by welfare cuts. Reality: Homelessness is up 50% since 2010.

9 Pledge: To help Redcar Steel factory families with £80m fund to find new jobs. Reality: The fund is to be used, in part, to provide redundancy packages.

10 Pledge: The NHS is safe in our hands. Reality: The NHS deficit is approaching £2bn, 40% of NHS services have been privatised and TTIP threatens us with full privatisation of a service we built and paid for.

Although this list may seem overwhelming, there is a resistance building from within and without Westminster. Scotland and Wales look set to either ignore or oppose the anti-trade union bill being pursued by David Cameron. The Labour Party are starting to form the foundations of real opposition under the stewardship of Jeremy Corbyn. This, coupled with the direct and indirect actions by the public should give us all hope that the days of broken political promises can be put behind us and a fairer, more equitable society can be created.