The UK and Spain are united by austerity and repression - Canary 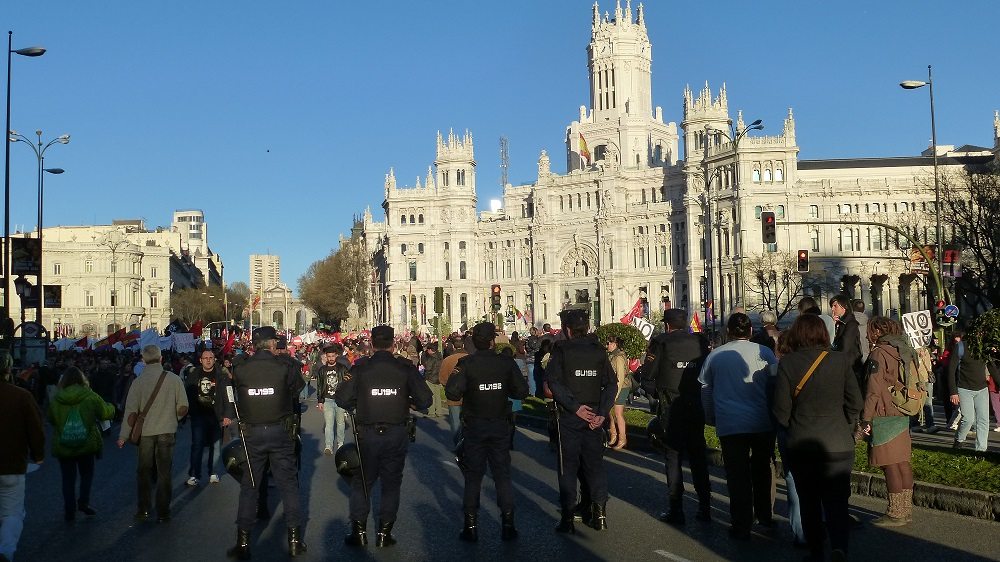 Last month, David Cameron and Spain’s right-wing Prime Minister, Mariano Rajoy, issued a joint article on industrial competitiveness, for publication in the Opinion section of Spain’s “Expansión” business journal. While feeding all the familiar platitudes about job creation to their comfortable Popular Party and Tory voters, they made no mention of the cost of pursuing the proposed competitiveness policies, nor of their increasingly repressive handling of voices of dissent. Given the unpopularity of Spain’s recently-introduced “Gag” law and the imminent presentation in the United Kingdom of the ill-defined Anti-Extremism bill, the PM’s joint article is worth further examination. It may be that the British government is heading the same way as Spain.

In the article, Cameron and Rajoy asserted that:

Five years ago, our economies were on the brink.

Without clarifying what the economies were ‘on the brink’ of, they went on to say,

our economies shared structural problems … that unaddressed would have led to long-term economic ruin.

The fact that public services are being demolished by their own policies and corrupt practices went unmentioned, leading the audience to conclude that economic ruin was the only issue of concern here. Clearly the economy impacts society, but countries that bail out banks with public funds while reducing public health and education services reveal priorities that are not universally held.

It may be telling that in the article section on the internal market, their final statement was:

bringing opportunities of holidaying abroad to more people across Europe.

This seems patronising in the extreme, given that it is unlikely to be a key concern for the many who face cuts both in the UK and Spain in their annual domestic income, or to the increasing numbers of people destined for a place in the poverty and homeless statistics.

The joint article referred to “significant differences in our economic circumstances” without mentioning the main similarity – the biggest companies in their respective countries are banks. Cameron and Rajoy stated that “things have begun to change”, adding,

These are sound-bites, and nothing more.

What exactly did Cameron and Rajoy mean by any of those phrases?

The statement offered no details of either country’s proposals with regard to these areas. Nor did they refer to the allegations of corruption and mismanagement of public finances, which have seen huge sums of public money being paid by the UK to government contractors such as Serco. Nor was a better future predicted as a result of on-going investigations of fraud in public office in Spain, or the elder sister of the Spanish monarch being due on trial in January on tax fraud charges. As can be seen from the ongoing debacle over working tax credits in the UK, Cameron is in the process of making work pay less too. Spain’s teachers, health workers and others in public service already saw pay and pension cuts five years ago.

Without mentioning any of that, the joint statement instead pointed to technology as one route to this better future. The proposed cross-Europe approach, they declare, will:

make life easier for consumers to shop online across the single market, ensuring, for example, that they can access their iTunes and Netflix accounts when they travel just as they do at home.

It is yet another example of the gulf between government policy and social justice. It is as if they are saying, “Move along. Nothing to see here. Just carry on shopping. Don’t worry if you can’t afford a holiday or don’t have access to a bank card. We’re in the business of creating jobs, even if they do not pay what you need to live.”

Similarly, the tone and absence of factual content in the sections on “Enterprise and start-ups” and “Free trade between Europe and the rest of the world”, particularly the latter, could be paving the way for the corporate invasion invited by any European country that accepts the Trans-Atlantic Trade and Investment Partnership.

The discourse of Cameron and Rajoy is of austerity, while banks continue to inflict human suffering on those unable to make mortgage repayments, and private landlords seek to gain from speculative investments. It is striking how Rajoy and Cameron presented a distorted reality, without raising current issues of concern which include zero-hours contracts, working for less than the living wage, or inflated bonuses for merchant bankers. Instead, Cameron and Rajoy stated,

In the UK, a jobs-led recovery has created more than 1,000 jobs a day. Spain is set to grow by 3.3 percent this year – amongst the fastest in the Eurozone – and is registering record-high job creation – with more than half a million new jobs in the last year.

Yet, according to a report on Spain, commented on in The Guardian in March,

less than 10% of the jobs created over the past three years are either permanent or full-time.

The same source also made reference to Rajoy’s triumphalist attitude reflected in his declaration that the ‘crisis was over’. It was a claim rebutted completely by the President of the European Commission.  Unemployment in excess of 4.5 million can hardly be considered cause for celebration. Nor can 1.5 million relying on soup kitchens for their food. Rajoy’s attitude, however, is unsurprising as he heads towards a general election in December, knowing that his key vote base is not derived from those most negatively-affected by the austerity agenda.

The young Podemos and Ciudadanos parties are presenting a growing opposition to the right-wing Popular Party, essentially on an anti-austerity ticket. Spain’s 15-M movement was an early manifestation of solidarity activism alongside the expansion of the Occupy movement.

And there have been consequences. One of the most alarming has been Spain’s Public Security Law, popularly known as the “Gag Law”, introduced in June of this year. This high-handed law, which allows police to be judge, jury and debt collector, authorises fines that can be as high as €60,000. A recent case shows that what is classed as an infringement of this law can include taking a photograph of an illegally-parked police car.

Growing numbers of people in both countries have seen an erosion of their standards of living with rising homelessness. This has led to an upsurge in anti-austerity activism. Spain’s response has been to repress demonstrations and gag opposition.

As reported in Saturday’s The Canary, we need to pay close attention to what Cameron is proposing for the anti-extremism bill. If he is issuing joint statements with Spain’s architect of deeply unpopular and undemocratic changes in the law, it suggests he will deal with resistance to his own policies in a similar fashion.