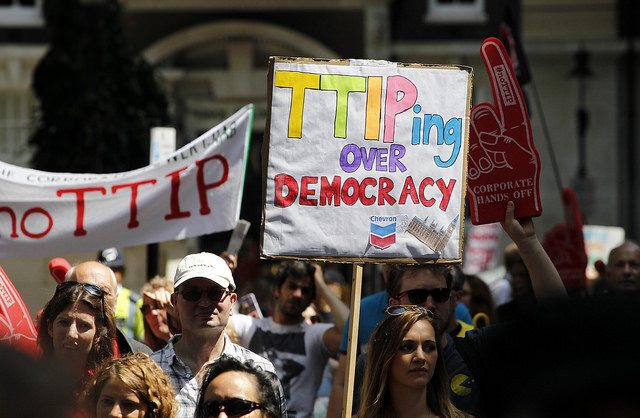 A leaked document has revealed EU plans to allow member states to set up reading rooms for secret TTIP documents.

The plans, leaked to campaign group War on Want, would allow EU members such as the UK to request a reading room where national politicians could access details of the controversial EU-US trade deal, the Transatlantic Trade and Investment Partnership (TTIP).

But rules over access to these reading rooms would still be draconian. Only MPs given permission by the government would be allowed to enter, according to War on Want, and visitors would be strictly monitored. Phones and other electronic devices would be confiscated on entry. Visitors would be accompanied at all times. They could only make hand-written notes and would be forced to sign strict confidentiality agreements.

The UK Government’s Department for Business, Innovations and Skills (BIS) confirmed that it would be requesting a UK-based TTIP reading room. A BIS spokesperson told The Canary:

The Government supports greater transparency in these trade negotiations and we are pleased therefore that the European Commission is adopting a more open approach.

However, Mark Dearn, campaigns officer from War on Want, responded:

This is yet another bogus claim from the UK government that it supports transparency in TTIP. In reality, no government in Europe has been more secretive. British MPs have been blocked from having access to key TTIP texts, while other European governments have granted such access to their parliamentarians.

The move to open new reading rooms comes in the wake of mounting criticism over the lack of transparency surrounding TTIP negotiations. In August it was revealed that electronic updates on the negotiating process would stop being sent to national governments because of leaked emails. This meant the only way to access certain documents would be to physically visit a secure reading room in Brussels.

Earlier in the year an EU ombudsman published a damning report on the transparency of the negotiations, pointing out that there is little or no access to US proposals or to details on how corporate lobbyists are seeking to influence talks. There is also massive secrecy around the so-called “consolidated texts” that will form the treaty itself.

The European public won’t have access to these documents until after the treaty has been concluded – effectively too late. And currently only 40 out of 751 MEPs (just 5.3%) have access to consolidated texts, with just 14 (1.9%) having access to all of them, according to an insider in Brussels who informed War on Want.

Currently for an MEP to see key TTIP documents, they must book an appointment to visit one of the Brussels or US embassy reading rooms. They must then sign a 14-page non-disclosure agreement and agree to draconian security measures, such as handing in all electronic equipment and being accompanied at all times.

The process of actually visiting the Brussels reading room is so shrouded in secrecy and security that Green Party MEP for the South West, Molly Scott Cato, described it as “like a scene from a James Bond film”.

Secrecy over the talks is not the only controversy to have dogged the TTIP negotiations. Campaigners have pointed out that the free trade deal could lessen important EU regulations on food and environmental safety, workers’ rights, internet privacy and banking controls. There is also criticism of the so-called Investor State Dispute Settlements (ISDS) – essentially secret tribunals where private corporations can sue governments.