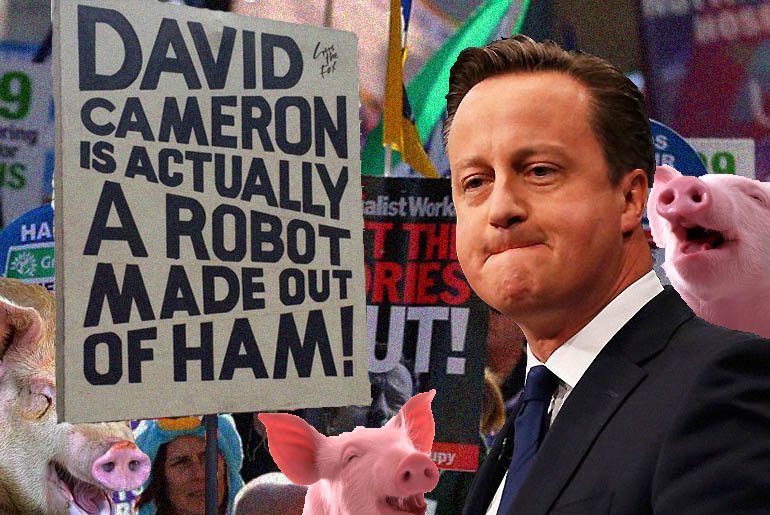 For years David Cameron has been the ham-faced robot of UK prime ministers, reading from his well-thumbed script, albeit inked in the devil’s own handwriting. When things get tough on camera, he abruptly disappears from view like someone who’s just realised that not only did they leave the stove on, but that they shut down the local fire department as well.

But now, CameronBot has started developing signs of sentience, even emotion, two of which are particularly prominent: confusion and embarassment. Since PMQs got a lot tougher we’ve seen Cameron deflating like a punctured porpoise, while a hunched-over Osborne looks on like a glue-sniffer who’s just found out the pound shop’s all out of toot.

Here’s a top ten list of the most gratifyingly awkward moments for the struggling ‘statesman’. And I want to stress, this is not, absolutely not, about taking a bloodthirsty delight in the very public fall-from-grace of man who’s ruined the lives of millions.

…When you realise you’ve revealed your self-serving narcissism to the entire nation. It was only the second time that Cameron had set foot in ASDA, so a rather inexplicable place to make a speech in the run up to the 2015 election (not the first time, that’s coming later).

With all the workers (and the cameras) looking on, these words tumbled from his gob:

…this is a real career-defining – country-defining election.

He quickly corrected himself, the Freudian slip there revealing what we’ve known all along – that he’d sell his own granny’s internal organs to Monsanto’s entertainment division if he thought it would get him ahead.

After this balls-up he got a call from the Technical Support team via a sim-card buried in his brain calling him back to the lab for debugging. A young technician later discovered that the ‘honesty’ circuits had become activated for a brief moment.

It was an embarrassing week for Cameron when he revealed that he doesn’t know the price of a loaf of bread because he bakes his own in a breadmaker. Not to impugn the noble art of baking but it just sounds like Cameron is afraid to go to the shop in case someone recognises him and forms a lynch mob.

He then revealed that he’d just signed a product placement deal with Panasonic and Cotswold Crunch, which makes a nice change from working for banks.

“A little plug for the flour made in my constituency – Cotswold Crunch – you get some of that, beautifully milled in the Cotswolds, you pop that in your breadmaker. You set the timer overnight so when you wake up there is this wonderful smell wafting through your kitchen. It takes 30 seconds to put in the ingredients. I’d recommend the Panasonic. There you are, that’s a shameless plug. Very easy – even Nick Ferrari could work a Panasonic breadmaker.”

As you can see, Cameron got so rattled that he tried to divert attention by accusing LBC Radio’s Nick Ferrari of being a duff baker.

8. Having to sit at a table with ordinary people

Here we see David Cameron in ASDA the first time around, long before his ‘career-defining moment’. He’s looking, well, not exactly comfortable. A Mr Jess Armstrong, the advisor who put him up to it, congratulates Cameron for managing to “mask his contempt”, and goes on to refer to people who like football as “scum”.

Actually, if you didn’t get it already, that one’s a spoof; it’s from Armando Iannucci’s Time Trumpet. While the advisors are actors, the footage is real, and does show Cameron not so subtly pulling up his sleeve to reveal the England wristband, as if to impress the people he so clearly looks down upon.

In many ways, the PM has given a boost to arts and culture of Great Britain, not by giving any more funding – he’s cut that – but because every time he tweets the satirical collage community gets a massive boost. A crude attempt by his media team to photoshop a red poppy onto Cameron’s blazer backfired when the internet took notice and responded thusly:

Some deeply entrenched parliamentary taboo must have been broken when Labour leader Jeremy Corbyn began bringing up the subject of, you know, real people during Prime Minister’s Questions.

He went so far as to mention them by name, and even read out a question from Kelly, asking how much the government would be taking away from her and her disabled son through tax credit cuts. The chortles from the Tories suggested that they’d misheard him, and thought he was talking about unicorns, or dragons, or liberal democrat voters. Despite Corbyn’s mathematically watertight assertion that she’d be £1800 worse off, Cameron failed to do the sums, and his pre-programmed responses left Kelly so enraged she contacted The Canary.

In case there was any doubt at all, this video of another woman hit by the cuts should illustrate that Cameron was definitely telling porkies (more on that subject later) in the run up to the election:

Child and Working tax credits will probably be the thing that finally sinks the Cameron-Osborne pirate ship. The only way I could be happier is if this wasn’t a metaphor, and they were actually on a ship off the coast of Somalia, taking on water.

General David Richards once had to tell Cameron that being in the Combined Cadet Forces at Eton didn’t qualify him to make complex tactical decisions on Libya. This prompted a teeth-bared bout of tense discomfort-based squirming from the PM.

We’ve been a lot easier on Cameron over Libya than we have been on Blair over Iraq, but if anything Cameron’s quick and dirty invasion was worse planned, more callous in its ineptitude, and in all likelihood drawn on the back of a fag packet the night before. Throughout the all-night Windsor pub crawl that was the planning stage for Libya, military generals like Richards repeatedly warned Cameron what would happen during the hangover period.

Remarkably, for a tattered country that has now split into two rival factions, plus a galaxy of tribal squadrons wielding AK47s, Cameron still thinks of Libya as a ‘success‘ because he got rid of Gaddafi. It’s like going for an operation and being told after by the surgeon that he had to remove your spleen, your right foot and both hemispheres of your brain, and that he’s not really a surgeon – but otherwise it all went fine.

This is part 1 of 2. For the final top 5 times we’ve seen Cameron crumple like a spinogelatinous wormweasel either keep your eyes peeled or click follow at the top right hand of the page. Then you can follow The Canary down the twitter coal mine, or the facebook rabbit hole, or your hoarder grandad’s junk-filled, booby trapped house. Whatever takes your fancy.