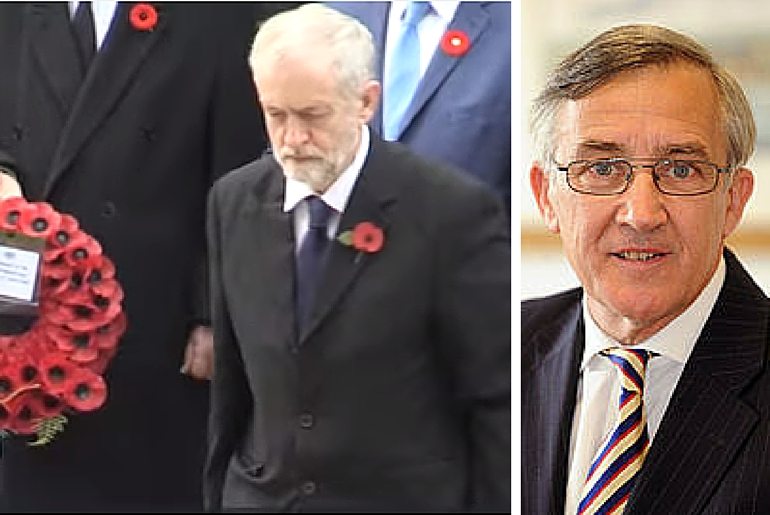 A former Conservative minister, Sir Gerald Howarth, berated Corbyn’s bow at the Cenotaph on Remembrance Sunday, suggesting it disrespected fallen soldiers. Yet he defended a Conservative MP who attended a Nazi-themed fancy dress party toasting the Third Reich, and deplored the fact that his constituency had a high number of Gurkhas.

In 2011, Conservative party MP Aidan Burley attended a Nazi-themed stag do. Burley’s friends chanted “Hitler, Hitler, Hitler” and a member of the group said “let’s raise a toast to Tom for organising the stag do, and if we’re perfectly honest, to the ideology and thought process of the Third Reich.” The Conservative Party stated the MP had been “stupid and offensive” for attending such an event.

We all do silly things – I mean, Prince Harry dressed up in some uniform, the former archbishop of Canterbury dressed up in a German military uniform. It’s not as though he declared some unacceptable policy, he has been engaged in some hi-jinx, we’ve all done it from time-to-time.

I was walking around in Aldershot on Saturday and everywhere I went there were Nepalese just basically sitting out in the open … sitting out on the park benches.

You may find this bizarre, but some of my constituents say ‘if I go into town, I haven’t got a park bench to sit on because they are all taken by the Nepalese’.

In a bizarre rant, Howarth also claimed that Corbyn had been disrespectful for not bowing low enough on Remembrance Sunday.  He said:

The leader of the opposition needs to understand that you cannot compromise on respect for our fallen, because it is those of our country who have put their lives on the line in two world wars, who safeguarded for us the freedom to speak our minds today.

Clearly, for Howarth, it is OK to be a part of a group that dresses in Nazi uniform and toasts to the Third Reich. For him, an MP attending a Nazi-themed stag do is just “silly”, even though the Nazis were responsible for the mass slaughter of millions of people, including many British soldiers and citizens.

It is also OK to criticise Gurkhas, who put their life on the line in the British army.

But if you don’t bow in a certain manner, then you are disrespecting fallen soldiers.