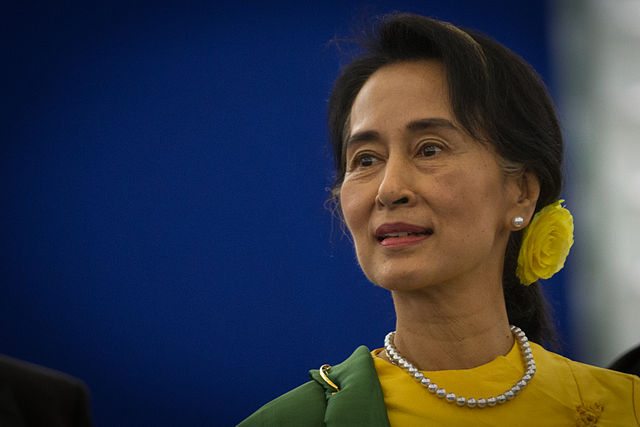 Elections were held in Myanmar on Sunday 8 November. While the final result has still not been announced, the National League for Democracy (NLD), headed by Aung San Suu Kyi, is just 38 seats away from a parliamentary majority.

These are Myanmar’s first contested elections since 1990, when the NLD’s victory was annulled by the military. The military has since inaugurated a “seven-step road map to democracy”. A semi-civilian government was created in 2011, led by the Union Solidarity and Development Party (USDP) – a party which was created by, and remains allied to – the military.

Whilst the elections are being celebrated as “a chance for another step towards democracy”, there are some important caveats.

Firstly, the military government will retain control of the government through a series of measures.

According to the 2008 constitution (promulgated by the army), only 75 per cent of seats in parliament can be won in the election, while 25 per cent are reserved for the military. The constitution also rules that the country’s president cannot have a spouse or children possessing foreign citizenships – thus Suu Kyi cannot become president, as she is married to a UK citizen and her children have UK passports.

The military also has the right to take over government under certain circumstances and to veto changes to the constitution.

Human Rights Watch has identified systematic and structural problems in the electoral process such as the lack of an independent election commission, and ruling party dominance of state media. The election commission lacks impartiality and has demonstrated pro-USDP and pro-military bias – its chairman, U Tin Aye, is a former lieutenant-general and member of the USDP.

Regarding the media, the organisation reports:

the state-owned sources have failed to present balanced or fair election coverage, with an absence of critical or independent viewpoints. State media has been used as a mouthpiece for updates on USDP projects and achievements, as well as a forum for positive coverage of the president, military, and USDP candidates

Discrimination and the exclusion of ethnic minorities

Discriminatory voter registration laws did not allow religious and ethnic minorities (including Rohingya Muslims, ethnic Chinese and Indians) to vote in or stand for elections. The restriction of voting rights affected up to 1.3 million Rohingya Muslims. Also, 88 candidates intending to run were rejected by the election commission; one-third of these were Rohingya applicants from Arakan State.

Although the Rohingya Muslim people have lived in Myanmar since the 8th century, they are considered illegal immigrants from Bangladesh by the Myanmar government and are denied citizenship.

They have been persecuted in Myanmar for decades. In 1978, 200,000 Rohingyas were forced to flee to Bangladesh, escaping military-led killings, widespread rape, looting, forced labour, arbitrary arrests, and the burning of homes and religious sites. In 1991-1992 almost 250,000 escaped to Bangladesh, due to another wave of violence committed by both the military and local Buddhists.

The most recent wave of violence against the Rohingya, which erupted in 2012, has killed more than 240 people and displaced of 250,000. These facts gained international media attention in May this year when up to 7,000 people were left stranded at sea.

Suu Kyi has attracted criticism for adopting very neutral tones during the violence. At an Oslo press conference in June 2012 she said: