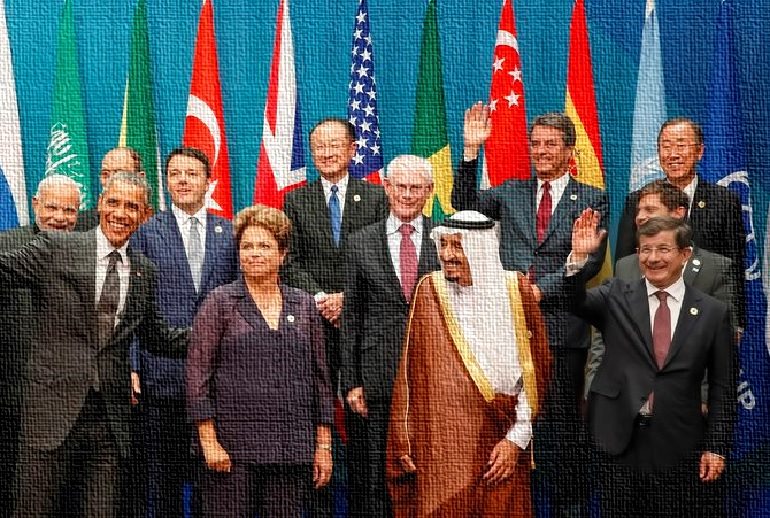 Representatives of the European Union and nineteen economically-powerful countries will meet in Turkey on 15-16 November for the tenth annual G20 summit. As always, the key focus will be a discussion about the global economy. However, the Turkish regime would like to use its role as the host of the event to put Syria firmly onto the agenda. In particular, it wants to encourage other nations at the summit to shun the progressive democratic experience of Rojava (more than they have already), and to give Ankara a greater role in the Syrian crisis. With this in mind, let’s look at why giving in to Turkey’s demands is most certainly not the way to resolve the conflict in Syria; –

voter rolls increased by more than two million, the same increase as over the four previous years

During the recent poll, meanwhile, supporters of the ruling AKP:

were registered at multiple sites and so, in effect, voted two or more times

These figures, Rubin asserts, show very clearly that the election was stolen.

For Selahattin Demirtaş of the Peoples’ Democratic Party (HDP), AKP founder and current president Recep Tayyip Erdoğan “used the fear of violence as a weapon” during the elections – much like George W Bush did in the USA after 9/11. And UK election observers confirmed this claim, having witnessed:

the clear intention of the government to discourage [opposition supporters from voting]… using both the implicit threat, and in some cases at least, the explicit use of physical violence.

HDP voters in particular, the observers insisted, had been openly intimidated.

And as The Canary reported after the elections, there were many other examples of how the governing AKP had hijacked the elections with violence, repression, and fear. Nonetheless, President Obama decided to “congratulate the Turkish people” for this bloodstained election.

The EU’s role in the AKP’s victory

An EU report on Turkey, which had been held back until after the country’s elections, was released this week. In the report, The Guardian says, the Turkish regime was accused of “serious backsliding” regarding human rights, the rule of law, and the freedom of the media. The announcement also proclaimed there had been:

Apart from the very diplomatic language used, there was something much more sinister at play. As the report may well have had an impact on the recent elections in Turkey, it seems very clear that the EU had delayed the report at Ankara’s request in exchange for a refugee cooperation deal. According to award-winning journalist Patrick Cockburn, the language in the critical statement was:

The EU, he suggests, effectively helped the neoliberal AKP to win the elections by allowing it:

The call by EU enlargement commissioner Johannes Hahn for Turkey to end its war on the PKK and resume negotiations, then, is too little too late. If it had come before the elections, it could have affected the outcome. But coming after the AKP victory as it has, it will almost certainly be ignored, and will be forgotten by the time the next election comes around.

In other words, the muted post-election criticisms from the EU should not distract us from the fact that self-interested European governments were essentially complicit in the AKP’s fraudulent victory.

Turkey and the G20 summit

According to columnist Semih Idiz, the G20 summit is:

In his view, it may also give the AKP a chance to “strengthen its hand” in the talks aimed at ending the Syrian Civil War.

For Ece Toksabay at Reuters, the summit will also see Ankara:

The current Turkish regime, he insists:

And the main purpose of this so-called ‘safe zone’ would be to stop the democratic, progressive, and secular revolution of Rojava from consolidating itself as an alternative to the AKP’s model of Islamist neoliberalism.

The AKP has a horrific track record of failing to prevent Daesh (or ISIS) from carrying out numerous terrorist attacks on Turkish soil. In Suruç, Ankara, and on numerous other occasions, HDP supporters and other left-wingers have been viciously murdered, as have two members of Raqqa is Being Silently Slaughtered – a group dedicated to documenting life inside Daesh-controlled areas in Syria.

At the same time, Erdoğan has been responsible for relaunching Turkey’s war against the PKK – a group which had previously pushed for peace negotiations and a settlement to the decades-long conflict related to the oppression of the country’s Kurdish communities. In fact, he has stressed that he will continue to fight the PKK:

until every last militant is liquidated

It short, Erdoğan is likely to seek at the G20 summit to push forward his own divisive and warmongering agenda, while hiding his complicity in the growth of Daesh.

President Obama, having called for an end to what he calls the “terrorist attacks” of the PKK, is clearly not interested in encouraging his NATO allies in Turkey to return to peace negotiations. By ignoring the fact that the Turkish State has targeted and killed many more civilians than the PKK ever could, Obama has clearly picked his side in this battle – in spite of the fact that the PKK and its allies are the most effective anti-Daesh fighters in the Middle East. He has also overlooked the recent acquittal in Turkish courts of eight suspected members of the clandestine JITEM – a state group which allegedly “tortured and killed tens of thousands of Kurds in the 1990s”, according to Telesur, while disappearing “some 17,000 Kurdish guerrillas, intellectuals and activists”.

At the same time, Western governments in general have remained quiet about Turkey’s recent military operation on the small Kurdish town of Silvan, which was launched just over a day after the elections. According to RT, armoured vehicles can be seen patrolling the streets, civilians have reportedly been killed, and there are “reports of starvation” due to a curfew that has now entered its second week. According to HDP deputy Ziya Pir, an official from the Interior Ministry said security forces would

In the last few days, Silvan has allegedly seen:

Meanwhile, in a show of increasing hostility towards Rojava, Turkey has:

For peace, Turkey must be stopped

For HDP co-chair Selahattin Demirtaş, the Kurdish people’s insistence on freedom, democracy, and human rights is precisely “why the AKP is becoming so cruel”. But people protecting and defending their “right to self-rule and autonomy”, he insists:

cannot be treated as terrorism

Furthermore, according to HDP deputy Sibel Yiğitalp, it is very clear that the AKP is trying to punish areas that voted for the HDP in this month’s elections. And for that reason, she says:

state violence has turned into a daily occurrence.

If you are using tanks in residential areas, it means you have launched a war on your own people

And it is in this context that journalist Uzay Bulut has insisted that ‘peace’ in the eyes of the current Turkish regime is:

a state in which you subjugate, terrorize, and if possible exterminate a people you have persecuted for decades.

For this reason, he asserts, ethnic cleansing will continue in Turkey unless the international community puts increasing pressure on Ankara to end its anti-Kurdish war. Unfortunately, The Guardian says, German chancellor Angela Merkel is “keen to strike a deal with the Turks” on the migration crisis, and is thus likely to look the other way regarding Ankara’s human rights abuses. Russian president Vladimir Putin, meanwhile, is planning to have “a crucial energy-related meeting at the G20 summit,” according to analyst Pepe Escobar. In other words, it seems like powerful governments at the G20 are unlikely to criticise Erdoğan and his AKP regime.

In order for democracy and peace to reign in the Middle East, however, the AKP must be pushed to end its repression and warmongering. And whatever happens at the G20 summit this weekend, we all have a role to play in defending the communities being attacked by the Turkish State. We in the UK can and must write to MPs, join protests in solidarity with Kurdish progressives, and make sure that parliament knows how we feel. We must not allow Erdoğan to get away with his crimes.