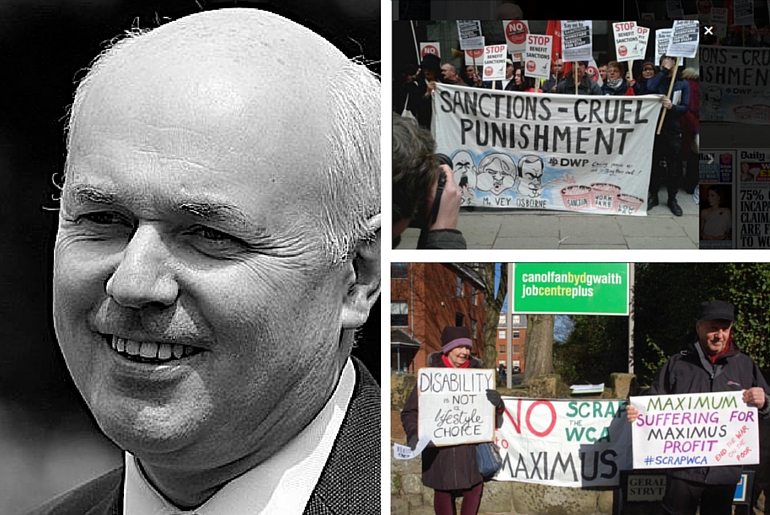 A damning report has linked 590 suicides and 279,000 cases of mental illness to the work capability assessment (WCA) designed by the Department for Work and Pensions, under the remit of Iain Duncan Smith.

The WCA is currently undertaken by private outsourcing firm, Maximus. It is their responsibility to decide whether a disabled person (or someone who has a long-term illness) who is a recipient of benefits, should remain on welfare or have their support cut and be forced into work.

The report, by researchers at Oxford and Liverpool universities, focused on 2010-2013. It claimed the stress of the WCA was the likely cause of 590 suicides and 279,000 cases of mental illness. It was also linked to an additional 725,000 antidepressants that were prescribed. Experts warned that the WCA may have “serious consequences” if people are moved off benefits. They went on to say:

The primary author of the report, Benjamin Barr, said:

Having examined the impact of other factors on these cases, Barr added that it was the WCA that was the “likely explanation”.

This isn’t the first time that such a link has been drawn. In September 2015, a coroner ruled that Michael O’Sullivan, a 60-year-old father, killed himself due to the WCA. Shamefully, 90 people a month died between December 2011 and February 2014, after being declared fit to work by the DWP, at that time assessed by Atos.

The DWP has responded to the claims about the large increase of suicides that are likely to result from WCA by saying they are “wholly misleading”.

Instead of acknowledging the potential damage caused by their policies, they present their own misleading information. In an embarrassing, and shocking, turn of events earlier this year, the DWP had to apologise for inventing stories about sickness benefit claimants. This resulted in thousands of people signing a petition for Iain Duncan Smith to resign. This was ignored.

However, despite the misery the DWP has caused, the department recently spent £8.5 million of public funds on a computer-generated monstrosity called Workie.

Once again, the department has ignored any criticism of their reforms. As hundreds of people die, as a result of the government’s policies their response is to put their fingers in their ears and hope it all goes away.