Hollande pushes to extend State of Emergency, these are the consequences - The Canary 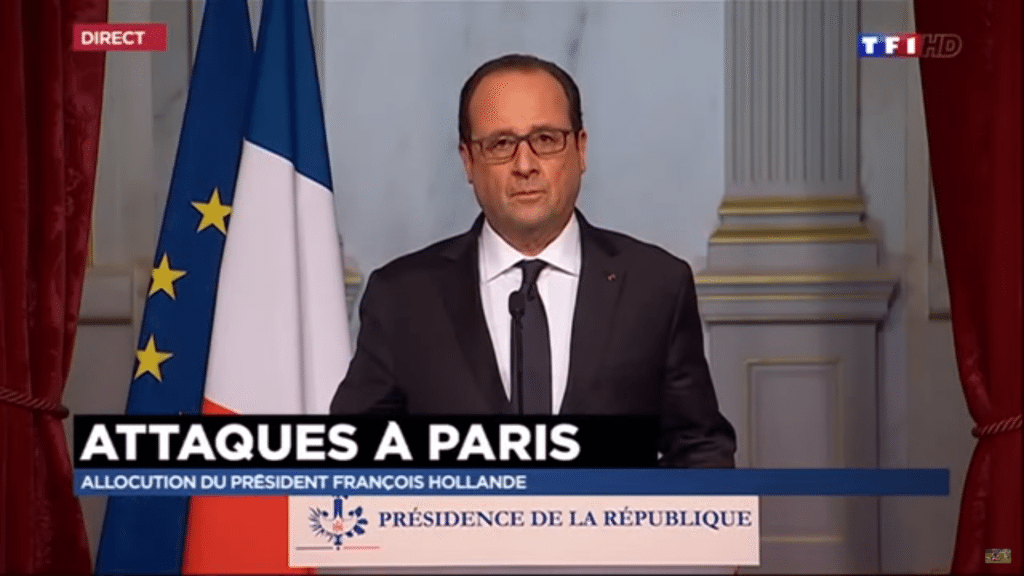 In the wake of the brutal Paris attacks on Friday 13 November, François Hollande declared a state of emergency: an exception to the rule of law that grants extra-constitutional powers to the State and the military, not used nationwide since 1961. It can only last 12 days. Hollande is now pushing for a three-month extension and for the French constitution to be changed to “allow the authorities to act … against war-level terrorism”.

Under the state of emergency, the French government is allowed to set up public curfews, close down public spaces, ban large gatherings of people and exercise control over pretty much all of normal public life. It also allows the police and security services to act without judicial oversight in some cases. The immediate effects of this, after four days, have been a raft of hardline domestic policies including early-day raids and a tripling of France’s strike capacity in Syria.

The threat posed by IS has taken on a very disturbing new dimension since the Paris attacks, but it is also important to keep a level head and ask ourselves: If, in the war on terror, we allow our governments to suspend the rule of law, what are the consequences?

Law philosopher Giorgio Agamben, in his book Homo Sacer, traces the history of this measure throughout the history of law and sovereignty. His most disturbing case study concerns Nazi Germany. He writes:

It is well known that the last years of the Weimar Republic passed entirely under a regime of the state of exception; it is less obvious to note that Hitler could probably not have taken power had the country not been under a regime of presidential dictatorship for nearly three years and had parliament been functioning.

As he explains, the state of emergency is always called for when an imminent threat presents itself to a society. For Nazi Germany, the threat was embodied by Jewish people, gypsies, homosexuals and disabled people – in essence, people that the Nazi’s believed undermined the “purity” of the Aryan people, and by extension the political health of the nation. They needed to be confined and eliminated because they were perceived as a direct danger to the fundamental pillars of society.

The state of exception allows the powers-that-be to take all steps necessary to prevent and address this perceived threat.

Legally speaking, almost anything goes in the state of emergency. In the interest of saving those that are on the inside of a given society – in the case of Islamic terrorism that means the liberal, secular, ‘civilised’ West – the sovereign who holds the power is allowed to define the limits of what is human (and therefore worth fighting for) and what isn’t. When Obama said that the attacks on Paris were “an attack on all of humanity“, what humanity was he referring to?

Humanity is no longer a universal concept. In a state of emergency, humanity itself becomes relative – to politics, nationality, and ideology.

The fact that a state of emergency was explicitly called is a very big deal. Hollande called for a sovereign exception to the law, and the French people, filled with rage and reeling from the brutality of the attacks, fully endorsed it.

In a wider sense however, the last fourteen years of war on terror have seen the gradual imposition of a permanent state of exception, first in the Middle East, and now in Europe. Wherever terrorism is involved, sovereign powers claim exceptional rule.

The illegal war in Iraq, drone warfare, the unchecked arrival of hundreds of thousands of refugees, and Theresa May’s most recent anti-terrorism bill all share the fact that they occur outside of our ‘normal’, peace-time legal framework. These extreme measures have been put in place because of the ‘exceptional’ circumstances we are living in.

But we need to be very wary of what the powerful members of our society will attempt to push through by using this type of rhetoric, because this logic could be used to justify all manner of measures, even ones that go far beyond the war on terror.

After ‘Jihadi John’ was vapourised by an American ‘Reaper’ drone, Jeremy Corbyn’s comments were sensible and pragmatic, as usual: Mohammed Emwazi, like Osama bin Laden, should have been tried in court and found guilty. If not, then what is the point of the rule of law? “But Mr. Corbyn, this is not the time for law”, warned Norman Tebbit from The Telegraph, declaring “Either you’re with us, or you’re against us“. He continued:

Members of both The Lords and Commons must now examine their consciences and ask themselves which matters most to them. Is it their right to prevent the security services from knowing with whom we all exchange emails, or the right of people not to die at the hands of terrorists?

At this point, terrorism is seen as such a big threat to our society that even those laws that separate the private from the public are being repealed. In the wake of the Paris attacks, the so-called “snoopers’ charter” may be pushed through more aggressively than ever, as an exceptional law. Never mind that experts in the industry such as Michael Dell warn that doing so will create a backdoor for hackers and cyber-terrorists; our leaders insist the emergency is now, and we must do everything we can to combat it.

The exception to humanity

What is at stake here is humanity itself, declared the leaders of the West. France’s revenge will be “merciless”, said Hollande, and true to his word the French military proceeded to carry out its biggest airstrike against IS, targeting several high-profile military bases.

The attacks on Paris were a brutal attack on innocent civilians enjoying their time off on a Friday night, but to say, as Obama did, that this was “an attack on all of humanity” reveals a very unsettling double standard.

Obama did not, for example, extend that same sentiment to the 3,341 people killed since 2004 by unmanned US drones in Pakistan, a country the US is not even officially at war with. As this disturbing infographic shows, less than 2% of the people killed were high-profile targets. Over 20% were children and civilians, and the remaining 77% were classified as “other”: people who may or may not have been militants, but who were in any case killed without being given any representation or voice to defend themselves. For the Obama administration, any able-bodied military age male in the region can be classified as a combatant.

Unmanned drones present the ultimate exception to the legality of warfare. Who is responsible for those thousands of innocent deaths in Pakistan? Is it the man who presses the button? Is it the commander who gives the order? Or has the drone itself become some kind of legal entity that can be held to account? Drone warfare epitomises our age of terror and exception.

And when the rule of law fails to regulate war, it won’t regulate any of its collateral effects either. As the International Rescue Committee insists, along with many other observers, our most urgent response to the refugee crisis must be:

To provide safe and legal routes to and through Europe

That we have failed to do so shows how far we have already come from the rule of law.

States of emergency are very rare events in history, but such an entrenched state of emergency as this current one is an event without precedent. IS needs to be defeated, there is no doubt about that. But we must be aware that our governments have chosen a dangerous path.

They have placed themselves above the law, and they are now in a position to make decisions that will affect all of us, beyond the war on terror. If that is the case, if the government is above the law, then our governments have chosen the path of totalitarian rule. They can no longer claim democracy as the ultimate goal.