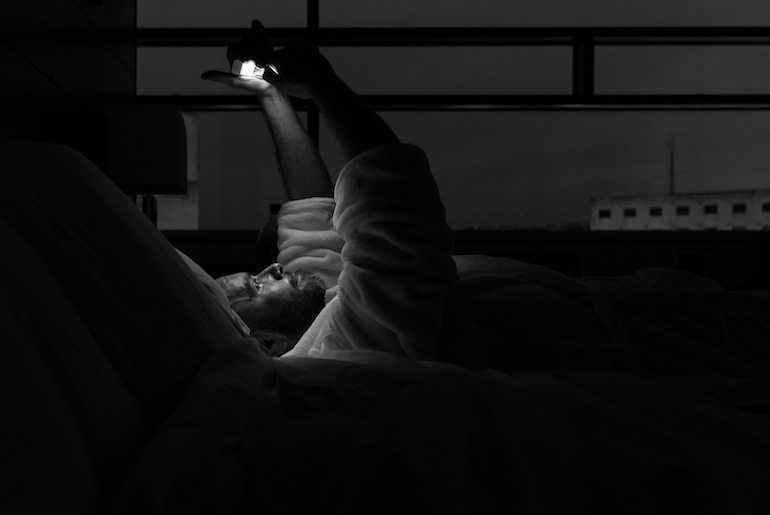 We’ve heard it all before – using a smartphone or reading a book on a tablet just before bed isn’t going to help us sleep. But switching off an hour before bed isn’t that easy, what with emails and WhatsApp messages pinging in, Facebook demanding attention and the next level of Angry Birds in your sights…

The only technology in the bedroom should be sleep trackers as studies have shown that they can help detect hypertension and sleep apnea.

Well, you might want to rethink the curfew and shut down early: researchers are saying the effect our phones have on us is bigger than we thought, and they’re calling on manufacturers to intervene with new sleep safe settings.

Devices like smartphones and tablets are designed to give us the best viewing experience possible. They do this by emitting blue light at short wavelengths. It’s precisely this blue light that interferes with us getting a good night’s sleep, by suppressing melatonin – a hormone that helps us sleep – and making us more alert.

In a new study, scientists at King’s College London and the University of Surrey wanted to find out just how damaging these devices could be to our sleep, so they compared the light emitted from an iPhone 5s, an iPad Air and a Kindle Paperwhite 1st generation displaying the same text. They then compared the results with the light output of the devices playing Angry Birds.

They found all three had similar outputs when displaying text, which were higher intensity than for the game. So reading that email might be a worse idea than catapulting that bird.

Professor Paul Gringras, one of the scientists behind the study, says manufacturers need to take more responsibility for the effect these devices can have on our sleep. He told the BBC:

There is converging data to say if you are in front of one of these devices at night-time it could prevent you falling asleep by an extra hour … It’s not good enough to say do less and accept this is the world we live in, they’re fun devices but we do need some protection on what they do at night-time.

It’s not just our sleep that’s being affected; research has suggested using smartphones can have a negative impact on our academic performance, decrease our mental health and make us lazier. Another new study shows that using a smartphone just before bed is bad for sleep quality, and using one in class and while studying is bad for academic performance. So far so obvious.

Well, it turns out all these effects could be worse in people who believe their lives are controlled by their environment.

In the new study, researchers surveyed US college students, asking them questions about their phone use, sleep quality and satisfaction with life, and analysed the results for people with different loci of control. They found the negative effects of smartphone use were more pronounced in people who have an external locus of control.

This, say the researchers, could point towards a potential treatment for compulsive phone use. They conclude:

This is encouraging as psychotherapy can target locus of control, making it more internal, and thereby empower individuals to use the latest cell phone technology to their advantage while avoiding the many negative outcomes associated with high frequency and compulsive cell phone use.

So it might be best to put the phone down a bit earlier tonight. And if you can’t do it, there are always orange glasses and psychotherapists.