The person who launched the "Close UK borders" petition is a migrant, and a hypocrite - Canary Workers’ Co-op 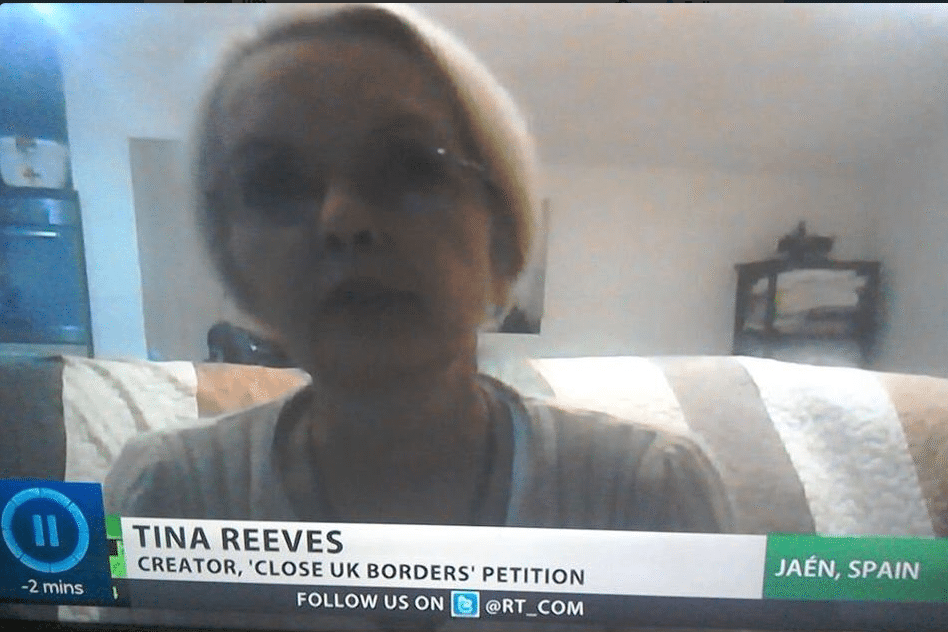 Tina Reeves, the Briton behind the ‘Close UK Borders’ petition on the Parliament gateway, has revealed that she lives half of every year in Spain.

If immigration were to be completely halted, as called for by Ms Reeves, this would mean that roughly 1,500,000 Britons living in the EU (including 761,000 in Spain) would be forced to move back or be effectively locked out of the country.

The news first emerged about Reeves when a snapshot from her interview with Russia Today was uploaded to social media, revealing the dateline ‘Jaén, Spain’.

The Huffington Post and EDL News followed up on the story, confirming that she owns a property in Chirivel, in the South of the country, and that she spends approximately half her time in Spain, and the other half in Plymouth.

@ChrisDYork I spend around 50% not continuously because I have a house for sale here. The remainder I spend at my home in Plymouth

The irony of this situation was readily picked up by Twitter users. However, in an interview with BuzzFeed News, Ms Reeves defended her case by saying:

I worked in Spain for eight years before it joined the EU, that is why I bought the house.

I do not currently live in Spain, I periodically come over to sort out my house which has been on the market for over five years and has been broken into nine times.

She also denied that it was hypocritical to call for Britain to close its borders whilst flying back and forth between Spain and the UK. She added:

Frankly, even if I did live in Spain, I am still a British citizen with my entire family in England – do I not have a right to care about my country and its people?

Judging by the staggering amount of signatures on the petition (almost 425,000), she is clearly joined by many people in believing that immigration endangers the entire UK population. And increasingly, since the Paris attacks, that is the reactionary view that is being adopted by European authorities.

France is now expected to demand a complete suspension of the Schengen agreement which allows free movement of people within Europe’s borders. While there have been short suspensions in the past, there is no precedent for an outright suspension on this scale.

The UK is not part of Schengen, but France’s demands could signal the beginning of a wholesale movement towards closing borders throughout Europe. Despite hundreds of thousands of refugees that are currently stuck in one of the poorest and most volatile regions in Europe. Closing our borders would mean turning our backs on a situation that we are at least partly responsible for, and silently watching yet another tragedy unfold ‘over there’, where it’s ‘not our problem’.

A counter-petition to Ms Reeves’s was launched on 16 November, asking Parliament “to keep Britain’s borders open”. George Elcock, who wrote the petition, states:

The petition to shut Britain’s borders because of events in Paris is ludicrous so I’ve created a counter-petition for the sensible. Because that’s the age we’re living in now, knee-jerk internet campaigns with very few answers.

Indeed, closing our borders offers no answers whatsoever, just the illusion that we’ve found a solution. Now more than ever, we must not turn inwards, but outwards in solidarity with the rest of Europe, and with refugees who are the biggest victims of terrorism.