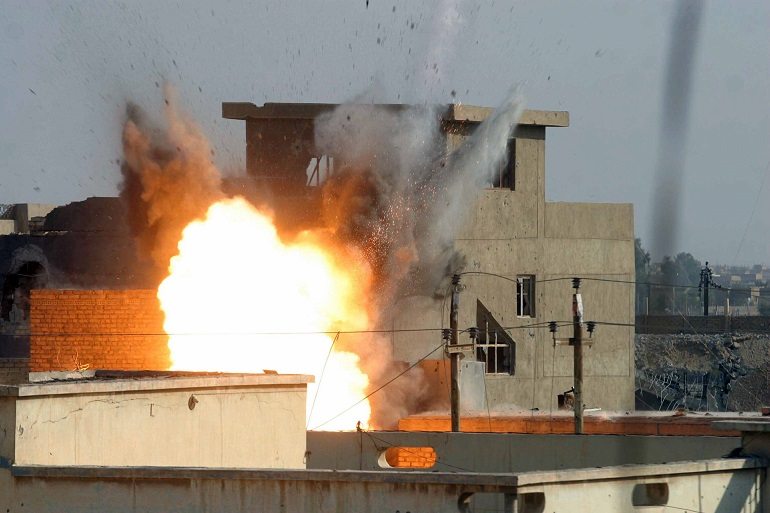 After the attacks in Paris, the French government decided to step up its bombing campaign in Syria. According to Article 51 of the UN Charter, countries are allowed to respond temporarily to attacks against them, under the argument of self-defence. But what is self-defence? And when does it turn into vengeance?

With the people responsible for the Paris murders already dead and the group behind the massacre representing a global ideology rather than an officially-recognised sovereign state, what is the legitimacy or purpose of a ‘self-defence’ argument?

What is the best way to defend freedom from bigotry?

The minds behind Daesh (or ISIS) were completely aware that further military mobilisation against them would be built on shaky legal ground. They also expected Western regimes to retaliate. In fact, they wanted this to happen.

As The Canary reported in October, intelligence agencies have consistently warned that Western intervention and interference in the Middle East simply drive even more disenchanted Westerners and locals to support Daesh. And the mistakes of the West – including what governments shamelessly call collateral damage – just strengthen the ideological pull of the extremist group even more.

In short, Daesh loves punching above its weight. This makes it feel like David against a Western Goliath, and allows it to present such an image of itself to those susceptible to its political arguments.

‘Self-defence’ as a propaganda tool

The French government has already used the self-defence argument to justify its war against Daesh, and so has David Cameron, in relation to the alleged assassination of Mohammed Emwazi last week.

The definition of self-defence, however, is:

But this legal allowance:

cannot be an excuse to continue the attack or use excessive force.

Article 51 of the UN Charter clarifies the limitations of international ‘self-defence’, saying it is only allowed:

until the Security Council has taken measures necessary to maintain international peace and security.

Essentially, international law sees self-defence as a temporary measure aimed at defending human life in a particular instant. Afterwards, the UN Security Council should ensure peace and security in order to prevent further conflict. In practice, however, this is rarely the case.

Western governments too often use the self-defence argument as an excuse for a gung-ho attitude of ‘bomb now, think later’ – much like Bush and Blair did in Iraq with horrific results. And for Institute for Policy Studies fellow Phyllis Bennis, the 13 November Paris attacks made it clear once again that:

the devastating wars that killed so many hundreds of thousands of ordinary people [in Afghanistan and Iraq] didn’t work to wipe out terrorism. Terrorism survives wars; people don’t.

For Bennis, the cry of governments and citizens searching for peace and security in the long term should be, once again:

The moment for self-defence has passed. Now is the time for supporting a long-term solution. And for justice, the construction of democratic systems aimed at ensuring justice for all citizens – like that of Rojava – must be supported.

Peace comes through justice, not revenge

Revenge is like a boomerang. Although for a time it flies in the direction in which it is hurled, it takes a sudden curve, and, returning, hits your own head the heaviest blow of all.

In other words, seeking vengeance lowers the aggrieved to the level of the aggressor and often hurts the former as well as the latter.

But Western military intervention in the Middle East may be neither self-defence nor revenge.

According to journalist Steve Topple, Western governments only use the term ‘self-defence’ because it is the “only leverage” they have in order to justify further military escalation, which is in reality part of:

the ongoing geopolitical ‘scorched earth’ policy the West has in the Middle East – which (as the Pentagon itself admits) will not end until our reliance on oil does.

Whether this is true or not, the reality is that only by listening to expert analysis – which consistently warns against escalation – can the problems of Daesh and regional conflict be solved.

The most important thing to ask after a terrorist attack is "who really benefits from that?" https://t.co/cqfgEjz0cB

The fact is that civilians in the West and the Middle East will not benefit from military escalation in Syria and Iraq. Daesh will get what it wanted (Western retaliation), and it will be strengthened in the process. Western citizens, meanwhile, will be even more at risk of indiscriminate attacks against them.

The only way to defeat one ideology is with a better ideology. And for that to be the case, the first step for Western governments must be to end subservient support for repressive regimes like Saudi Arabia, Israel, Turkey, and Qatar. The second must be to back the secular, directly democratic model of Rojava.