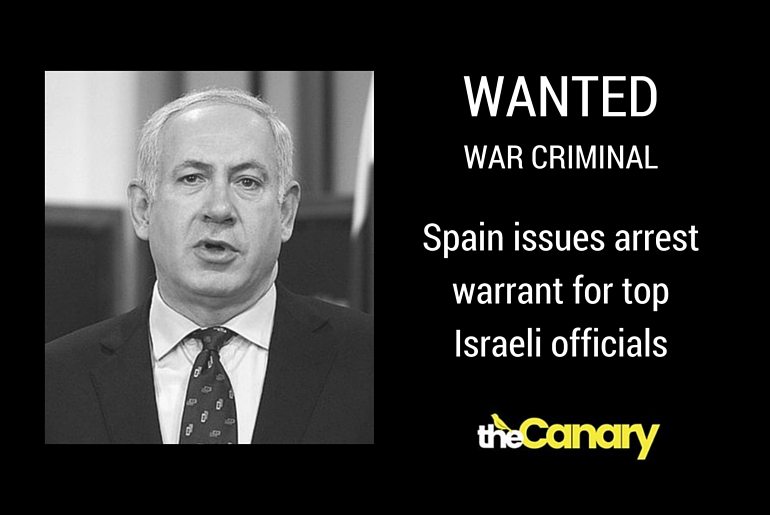 Israeli Prime Minister Benjamin Netanyahu and six other Israeli officials could be put on trial for war crimes if they set foot in Spain, after a Spanish judge issued an arrest warrant.

We consider it to be a provocation. We are working with the Spanish authorities to get it canceled. We hope it will be over soon.

The arrest warrant issued by judge Jose de la Mata comes as part of a longstanding international effort to hold Israeli leaders to account over the attack. The Mavi Marmara was the main civilian ship in the “Gaza Freedom Flotilla”, a group of ships that carried over 500 passengers, along with humanitarian aid and construction materials. The Flotilla, organised by the Free Gaza Movement, was headed towards Gaza, with the aim of breaking the blockade, drawing public attention to the situation there and delivering humanitarian aid and supplies to Palestinians in the Gaza Strip.

According to a damning report published by the United Nations Human Rights Council (UNHRC) shortly after the attack, the IDF had made extensive plans to intercept the Flotilla, “including the military option of commandeering and impounding the ships and detaining the passengers”. Israeli intelligence forces kept specific passengers on the Flotilla under advance surveillance, and the IDF also set up “processing centres for detainees at the port of Ashdod” in advance.

As the Flotilla approached the Gaza blockade on 30 May 2010, the Israeli Navy warned each ship they were approaching an area of hostilities, and that they should turn away immediately or face the consequences. A representative for the Free Gaza Movement spoke on behalf of the entire Flotilla, specifying that “the passengers were unarmed civilians delivering humanitarian aid and that none of the ships that should be considered as any form of threat to Israel,” according to the report.

The Israeli Navy then approached the Mavi Marmara ship, firing tear gas and stun grenades at the volunteers. A first attempt to board the ship proved unsuccessful after passengers started throwing chairs, sticks and other objects. The UNHRC fact-finding mission found that:

The Israeli forces should have re-evaluated their plans when it became obvious that putting their soldiers on board the ship may lead to civilian casualties.

But they didn’t, and soldiers were ordered to board the ship, descending from helicopters. A fight between stick-wielding volunteers and fully-armed IDF soldiers ensued, resulting in the death of nine Turkish volunteers. One of the Britons on board, 42-year-old Alexandra Lort Phillips, from Hackney, east London, told The Independent:

We were volunteers, not a disciplined group and the soldiers were attacking us in formation. I saw one of my Turkish friends lying there. I thought he was injured. It didn’t cross my mind that he had been shot in the forehead and killed instantly.

Despite this clear verdict, no action was taken for several years. An initial inquiry by the International Criminal Court (ICC) found that the incident was “not grave enough”, a decision that was described as “deeply insulting” by one of the British activists on board the ship. It wasn’t until earlier this year that the ICC revoked its previous decision and called on its chief prosecutor to reopen the investigation. In September, British activists who were on board the Mavi Marmara also filed a lawsuit against IDF soldiers, hoping to prosecute them in the UK.

There have also been previous attempts to bring Netanyahu and other Israeli officials to court, in Turkey and in the UK respectively, but they all eventually stalled. This time could be different however, if anything because Spain has a strong record of upholding human rights through the so-called “universal jurisdiction“. This provision of international law allows judges to try cases of human rights abuses committed in other countries, earning Spain a reputation as “the temple of international justice”, according to a spokesperson for Human Rights Watch.

Although the universal jurisdiction was reformed last year by the People’s party, making it much harder to bring forth such cases, the arrest warrant issued by de la Mata shows that among Spain’s judges the commitment to pursue international human rights abuses is alive and well.

The most famous case involving the universal jurisdiction took place in the late 1990s, when survivors of torture filed a lawsuit against the murderous Chilean leader, Gen Augusto Pinochet. He was detained in a private hospital in the UK, awaiting extradition to Spain. He was never tried however, as the then home secretary Jack Straw ordered his release on health grounds in 2000 after a controversial medical test stated that Pinochet was not fit to appear before a court.

The universal jurisdiction failed to hold Pinochet to account for his crimes – which include the disappearance of 3000 people and the torture of thousands – but as one of the key players, Spanish lawyer Joan Garcés, recalls:

Pinochet did not come back to Chile as an innocent man – as a former president unfairly accused – but as a person guilty of human rights violations whose extradition had not been allowed for health reasons.

The victims’ claims were again a public issue. Chile had changed. Chile had to face the atrocities of its past – a past the country was denying until Pinochet was put under custody in London.

Netanyahu is unlikely to face extradition because of the current limitations on the universal jurisdiction. However, just like Pinochet, Netanyahu has several crimes to answer for that go far beyond the attack on Mavi Marmara. In light of Spain’s record of upholding human rights, this might be a first concrete step towards bringing Benjamin Netanyahu to justice before a court of law.