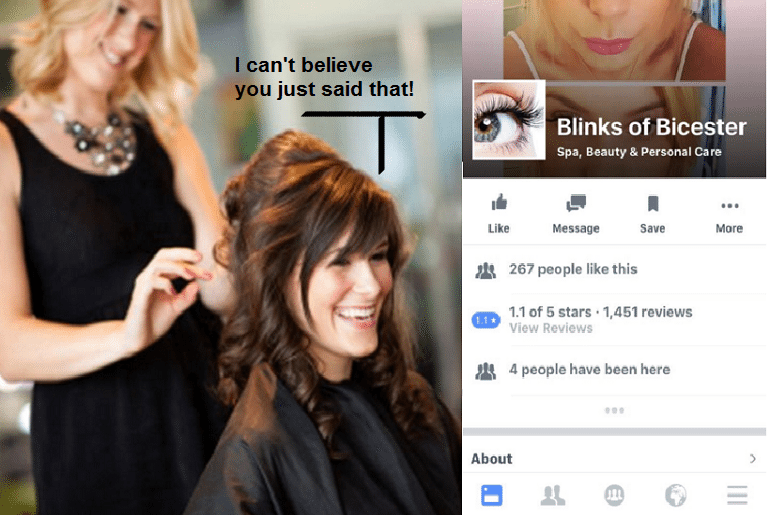 An obscure beauty parlour in Bicester, England, has become world news. Here’s why: 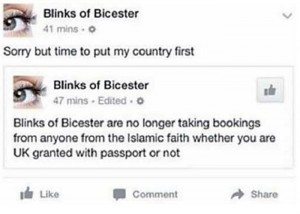 That’s right. The shop owner attempted to ban Muslims from her store, in apparent ‘revenge’ for the Paris terror attacks. Quite how she would have enforced the ban, no one knows. Ask every caller if they’re a Muslim? Put in a zero tolerance policy on all brown people?

The salon’s owner, April Major asserted that since her business is not a public limited company, (PLC), she’s above the law… 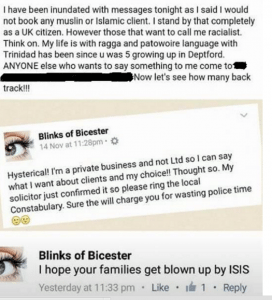 As one might expect, there was a fairly vigorous response from Britons who were outraged by the flagrant racism.

One of the early reactions was a new Facebook group called ‘I won’t be using ‘Blinks of Bicester’.

It’s great that when one single shop starts to try and introduce segregation, literally thousands of people of every creed and description, slap them down in a flash. Some even did it with great humour and charm:

I guess she might be able to get cheap eyelash extensions from China, or maybe just cut a few hairs off a cat.

Social media had a field day: 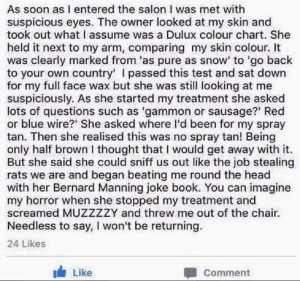 One of the shop’s false eyelash suppliers rushed to wash their hands of the business. (Someone give that brand manager a raise.)

She was also arrested, charged and released on bail. Why? Because in this country, discriminating on the grounds of race or religion is illegal. Thames Valley Police released a statement, saying:

We have arrested a 43-year-old woman in Bicester today after a number of complaints about a racially abusive post on social media. The woman was arrested under section 19 of the Public Order Act which relates to the display of written material which is threatening, abusive or insulting with the intention of stirring up racial hatred, and for producing malicious communications.

So, April Major is paying for her stupidity. She did something racist, illegal and profoundly unhelpful. She should go to trial and get the maximum penalty because she showed absolutely no remorse.

The problem with the way much of the mainstream media have presented this case, like a pitchfork brigade has chased this woman out of town, is that they provide bigots with both a platform and a martyr. They focus on the corner of twitter where she became a chew-toy, whilst widely ignoring what her supporters were saying, which was toe-curlingly repellant.

But by far the most gobsmackingly awful part of navigating this affair, was watching videos like the one below. This bloke is not someone’s creepy, demented uncle who just found YouTube, but an actual comedian, called Pat Condell. Condell has exploited the spiralling awfulness to promote his pathetic work. He has won awards. Richard Dawkins got his videos put back on Youtube. (I’m sorry, Richard, it’s over). But if April Major had watched it, it would in some way explain, not only her crushing sense of entitlement and her racism, but more importantly, her conviction that she’d done something noble and patriotic when actually, the truth is that she was breaking the law.

All the major UK papers covered this story. It’s gone everywhere else from Turkey, to Russia, to Israel – one Australian news site put it in the top ten stories from around the world. People like April Major, and extremists of all kinds, have a worldview that is based on the idea that different peoples cannot live, peaceably side by side, let alone support each other.

The fact that everyone stood against this attack on innocent individuals is absolutely brilliant. That’s what makes it world news. The bigots will hate it.