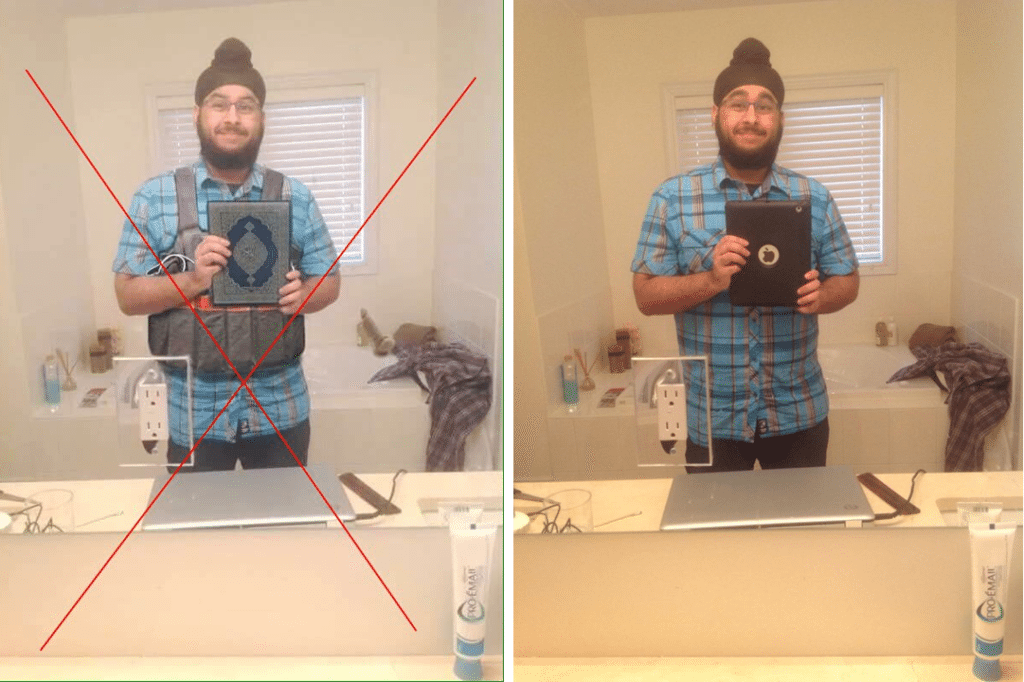 As if it wasn’t bad enough having a photo of yourself doctored to make you look like a suicide bomber, imagine if this picture was then splashed around the world’s media describing you as “one of the terrorists” responsible for the Paris attacks.

We’ve all taken a bathroom mirror selfie at some stage. They’re generally pretty rubbish but they’ll do for a profile pic or a quick status update. For example, if you’re going on a hotly-anticipated date:

However, Toronto resident Veerender Jubbal has some enemies online. Trolls who support the so-called #Gamergate movement had already been giving Veerender a hard time for a year or more after he started the hashtag #stopgamergate2014. As vice.com has detailed, a “joke” began to develop among some Gamergate supporters that Veerender’s Sikh identity made him look like a muslim. This snowballed into a plan to photoshop a picture of him to resemble a suicide bomber.

Well, that escalated. The doctored image was posted in the aftermath of last Friday’s terror attack and spread not just around the forums and twitter feeds but into the mainstream media. In Spain, in Italy, and before long in India, the picture was being used completely uncritically to show the world a chilling last “kamikaze” style portrait of one of the Paris suicide bombers.

Veerender’s initial reaction was characterised by the weary but defiant humour of someone who’s used to being trolled:

Learn the difference between me being a Sikh, and a Muslim.

Cry in mug, while I use your tears to water my garden.

I am valuable, and rad.

But as the full scale of what was happening became apparent, he was understandably more concerned:

This whole thing puts me in a bad position in the sense, where I could be harmed and/or hurt due to this.

This is libel from news, and TV.

In gauging this entire incident–millions upon millions of people have seen the photoshopped images, and have placed me as a terrorist.

Finally Veerender decided to tackle the situation head-on, putting out a statement through the Sikh Coalition in which he notes the difficulties faced by Sikhs because of their “religious appearance” as well as the good work being done by Sikhs in Paris.

Happily, the more sensible corners of Twitter have been quick to show support for Veerender:

Thank you very much to BuzzFeed, people from Spain bringing up the news, and others leaving kind/considerate messages.

Including this message which sums things up very neatly:

Please send warm thoughts to @Veeren_Jubbal as he continues to deal with toxic racists upset about video games.

This episode highlights the casual racism that often blights people’s attitudes around perceived threats. Veerender was targeted partly because of a deliberate, knowing and “satirical” lumping together of different non-white appearances under the heading “islamic terrorist”. It is completely clueless but can have devastating consequences.

When fanatical white supremacist Zack Davies used a machete and hammer to try and kill Dr Sandarev Singh Bhambra in supposed revenge for the murder of Lee Rigby, it was the Sikh dentist’s “ethnic appearance” that made him a target. Not one to let facts get in the way of his murderous bloodlust, Davies said he attacked Dr Bhambra “for the whites” and told police: “It’s kind of like Europe’s under siege”.

There are also echoes in such thoughtless “profiling” of the killing of Brazilian Jean Charles de Menezes. The catalogue of errors that led to him being mistaken for a man of completely different ethnic origin has rightly come under renewed scrutiny this week as the question of whether UK police should ever “shoot-to-kill” is debated. Perhaps the real debate we should be having concerns how easily we can allow ourselves to see “enemies”, “threats”, and “targets”. There were plenty of opportunities for police to confirm the identity of de Menezes but they were missed in the rush to declare him a target. There are plenty of reasons why the altered photo of Veerender Jubbal is obviously fake but they were missed in the rush to publish a juicy image.

That’s an iPad, not a Quran, and the Dastar (turban) is worn by Sikhs. pic.twitter.com/xkKzJ0G65f