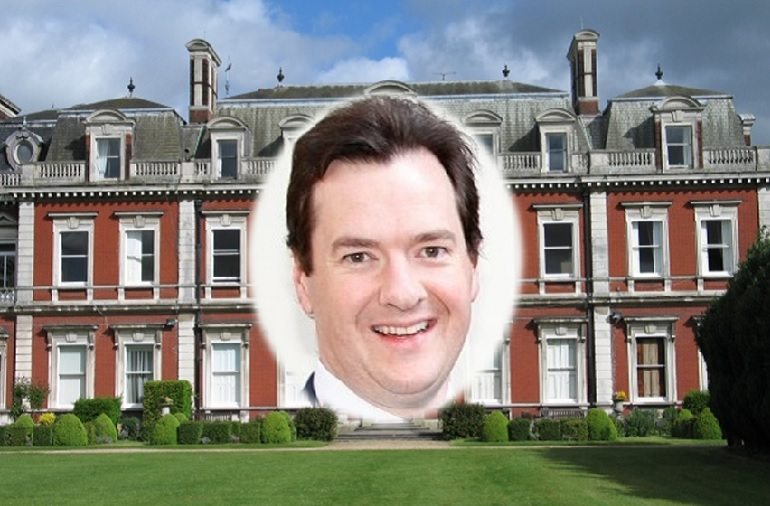 Chancellor of the exchequer George Osborne has outlined his plans to invest public money in more house building. He sought to present this programme as proof of his credentials as a champion of British workers. But is that really the case?

Despite Osborne’s fake u-turn on tax credit cuts, that simply masked a number of other cuts which will seriously affect British workers, his promise to “build 400,000 new homes in the private sector” may seem like something positive. But it is only good news for corporate donors linked to the Conservative party.

With taxpayer money now destined for the pockets of private developers, the stock market value of Britain’s three biggest housing companies (Persimmon, Taylor Wimpey, and Barratt Developments) has just shot up by £750m. According to the Electoral Commission, the Tories have received nearly £4m from this type of corporation since 2001.

But surely the “largest house-building programme since the 1970s” is a good development, right?

Firstly, it’s not just a propaganda tool, as The Independent’s Matt Dathan claims, aimed at deflecting attention “away from huge cuts to public services and a climb down on his tax credit cuts”.

Nor is it just a measure aimed at maintaining the Tories’ desired image as “the champion of blue collar workers”, as Mikey Smith wrote at The Mirror, in spite of £12bn cuts being made to key public services just as defence spending is set to increase by the same amount.

It is, in fact, a move that will “push up property prices in the short term”, according to head of conveyancing firm My Home Move, Doug Crawford. It is a move which, for former housing association CEO Tom Murtha,

proves once again that the government has no solution to the housing crisis.

And it is a move that, as Generation Rent director Betsy Dillner says, is “yet another reckless giveaway”.

What are the big problems with Osborne’s plans?

Add to this the cuts in housing benefits, which chief executive of South Yorkshire housing association Tony Stacey says “can only increase the hardship experienced by many of our customers”.

Tom Murtha, meanwhile, asserts that the government clearly has

no intention of helping the many on low incomes who are in need of a decent home to rent at a price they can afford.

Although social-rented homes give “the greatest social and financial return”, he says, the government has essentially

sacrificed social housing, the only truly affordable home for those on low incomes, to subsidise home ownership initiatives which will not be affordable to most.

For him, therefore, Osborne’s plans are clearly “driven by ideology and not need”.

So when Dillner claims that Osborne missed an

open goal … after raising £6.9billion to invest in new affordable homes… by deciding to hand the money to private developers instead of bringing down rents for private renters

we can only assume that he scuffed the shot on purpose.

If Osborne truly wanted to be the champion of British workers, he would need to change his approach significantly. As we outlined at The Canary in October, the private sector has played a key role in the current housing crisis in Britain, and the solution will come from building and owning accommodation cooperatively and in the interest of British workers (and not the Conservatives’ corporate buddies).

And that, the charity asserts, means

But this is not what Osborne presented in his autumn statement. And it is not something he is likely to offer anytime soon.

For that reason, it is positive that campaigners, tenants, trade unionists, and progressive politicians – united under the banner of March for Homes – have already organised and protested to call for an urgent response to the housing crisis, demanding the following:

And that is precisely what we need. So to make sure your voice is heard on this matter, write to your MP, join a union, or inform those around you whenever you can. Or at the very least, refuse to give credence to the ludicrous claims that the Conservatives represent the average Brit.