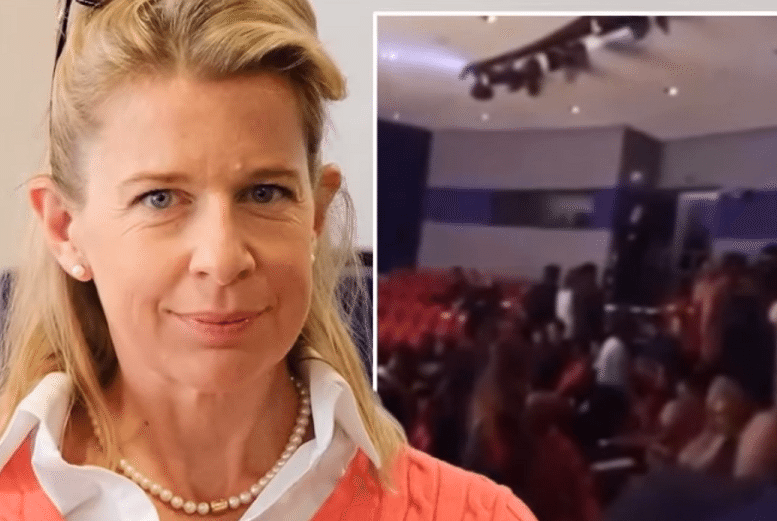 Katie Hopkins turned up to speak in a debate at Brunel University. The students, however, had obviously already heard enough of the former The Apprentice contestant. This is the moment around 50 of them, making up 75% of the audience, turned their backs on her and walked out.

Hopkins, whose previous vile comments have seen her questioned by police for inciting racial hatred, after she called refugees “cockroaches” and claimed she “doesn’t care if migrants die while trying to leave their countries by boat,” was invited to speak at the debate “Does the welfare state have a place in 2015?”.

Given the following was her response to the government’s latest spending review, it is unclear what pearls of wisdom she was likely to add to the debate.

Unemployed people sat at home listening to #spendingreview to see how much more cash they will get for doing bugger all.

Furthermore, during a talk she gave at Cambridge University, Hopkins stated she didn’t “really like fat people”, said she “would really like to meet a ginger in the dark”, and that she believes that “preserving an elite system is a fantastic thing”.

It is, therefore, unsurprising that students had a variety of motivations for opposing her.

The students have received messages of support across social media:

As responses to hate go, this is quite brilliant. Well done Brunel Uni. Top marks. https://t.co/CocuJP3dgs

Ali Milani, President and Chair of Board of Trustees for the Brunel Students’ Union, backed the students’ actions, stating Hopkins “has no association with Brunel and provides no valuable intellectual insight.” He further stated:

Needlessly to say, I stand in full solidarity with those that chose to partake in the action, respectfully voicing their discontent. They have made me proud to be their representative.

There should be no doubt that Katie Hopkins views are despicably racist and as such she could not make a valid contribution to any debate, let alone one on a university campus. The dignified, yet defiant, response from Brunel students should be applauded by us all, and replicated as widely as possible.