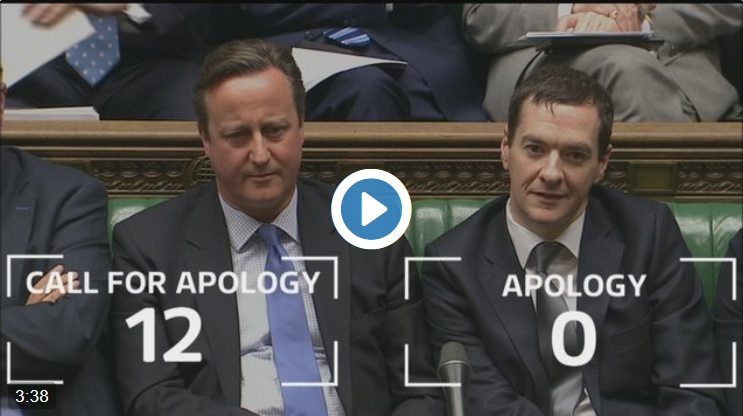 During the opening of the debate to approve airstrikes in Syria, David Cameron was confronted for branding any MP who voted against his war a “terrorist sympathiser.” Despite being given an astounding 12 chances to apologise for his remarks, the prime minister refused to do so.

The prime minister, seemingly attempting to distance himself from his earlier comments, opened Wednesday’s speech saying he respected all MPs, and believed everyone would be voting in good faith. This was met by contemptuous laughter from across the house, including Mr Cameron’s own benches.

It didn’t take long for MPs to begin asking the Prime Minister to give way, so that they could request that he explicitly apologise for his earlier remarks. The results of these efforts are captured in the video below.

It wasn’t just the MPs who were outraged by Mr Cameron’s slur, or his refusal to apologise – Twitter lit up with comments on the #DontBombSyria hashtag.

One reason we are not 'terrorist sympathisers',Cameron, is that unlike you,it's us on trains and buses,sitting in cheap cafes who get bombed

So if you're AGAINST participating in the senseless slaughter of civilians you're a #terroristsympathiser . Got it.

A half million pound education and @David_Cameron hasn't the grace to apologise to Corbyn for the #terroristsympathiser slur. #syriavote

Mr Cameron may very well get his majority and drag the UK into yet another open-ended war in the Middle East – with all of the destructive outcomes we might expect to result. His likely victory will serve as a loss for British armed forces, voters and the Syrian civilians killed and injured in his folly.

The Artist Taxi Driver Mark McGowan captures the lunacy of the situation with his usual expletive-laden flair below: