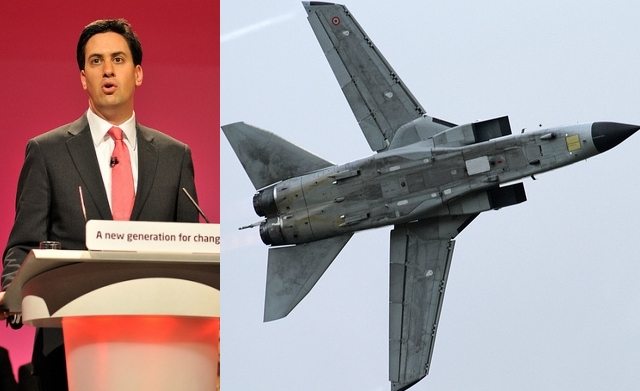 In the midst of yet another week in which hawkish elements within his own party have casually undermined him, it may be gratifying for Jeremy Corbyn, the current Labour leader, to realise that he has support – albeit not by name – from his immediate predecessor. Ed Miliband, the leader who resigned in May, has announced that, like Corbyn, he opposes David Cameron’s air strikes against Daesh (Isis) in Syria.

In a statement to his constituency, published on the Labourlist website, Miliband explained his rejection of the policy, in terms that implied that air strikes would be an action taken simply for the sake of taking action.

I do not think the case has been adequately made that extending British air strikes will either defeat ISIL or make us safer here at home.

In other words, the RAF would only be doing what the US Air Force, the French Air Force and the Russian Air Force, among others, have been doing for a long time already – to limited positive effect. Cameron’s policy does not make any commitment to doing anything differently, so why should anyone assume that it will have a different outcome?

Neither an explanation of who the ground troops will be, nor the political settlement we are seeking in Syria, or how we get there, has been provided by the government. We would be going ahead without an adequate road-map or a clear strategy.

This is the part of Miliband’s statement that implies gesture politics on Cameron’s part; the air strikes policy addresses a crisis about which “something must be done, and this is something, therefore we should do it”. Cameron thinks it will make him look like a man of action, which is not a problem in itself, but it does nothing to help establish whether the action in question is the right one or not. There is no coherent explanation of any actions that the British will take in Syria; even the aims of the air strikes themselves are not particularly clear, let alone how they are to be carried out.

The other case made for extending air strikes is that it will make us safer here at home. But I do not believe this case has been adequately made either.

It is true that if Daesh were destroyed, the population of Europe would probably be somewhat safer – although the problem of Wahhabist terrorism does not begin or end with Daesh, or anything like it. But also, Cameron has quite openly conceded that air strikes are not going to destroy Daesh, in which case there is a danger of them simply provoking fresh retaliation instead.

ISIL is a network, not simply an organisation with a headquarters. What is more, nearly 3000 coalition air strikes have already been aimed at Syria and the case for what British air strikes will add is weak.

Given the relatively small size of Britain’s air forces compared with those of the USA and Russia, this is a good point too. The Russian Air Force has been reasonably effective in containing Daesh, but has so far come nowhere near to breaking it up. Why would the Royal Air Force be able to do better?

There is also the serious possibility that air strikes are radicalising more and more Syrian citizens when they get caught in the crossfire, especially when air forces use chemical weapons, strengthening Daesh’s support in the long term.

It is quite plain from recent revelations that Miliband is not a great fan of Jeremy Corbyn, but he clearly shares his successor’s views on warfare. Miliband was an effective critic of Cameron’s failed attempt to intervene in Syria two years ago when there was a similar lack of detail or clarity in the proposal.

It is refreshing to see a major Labour figure actually opposing the Conservative’s flawed policy, instead of attacking his own leader. More of that please.

Featured images via Ronnie Macdonald and Ed Miliband on Flickr.