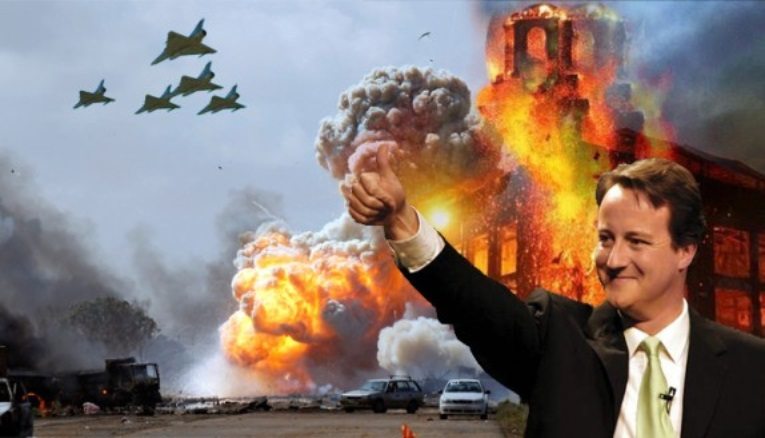 THE CANARY EDITORIAL ON THE ‘YES’ VOTE FOR AIRSTRIKES AGAINST SYRIA

Despite the fact that the prime minister’s plans for airstrikes on Syria claim the support of fewer than half of Britons, and almost zero support in Scotland, Wales or Northern Ireland – England’s permanent political class is once again dragging the UK into yet another military misadventure in the Middle East.

The March To War In Syria

Despite a concerted rebellion from Tory MPs which could have been galvanised to prevent the attacks, the support of Blairite Labour MPs, the Liberal Democrats and the DUP has allowed Cameron to march the UK into war. Cheers reverberated around the Commons as Cameron’s motion won decisively – 397 to 223.

The motion put forward by Conservative MP John Baron against military action was soundly defeated by 390 votes to 211.

We saw, during the Syria debate, a clearly gleeful return of the Blairites. Margaret Beckett, Yvette Cooper, Alan Johnson – all the same people who took us to war when in government in 2003, taking us to war again while in opposition (even to their own party) in 2015. One after the other, with evident relish, they stood to make the same self-satisfied and disingenuous arguments put forth in follies past. We cannot sugar coat it. It was a truly shameful day for the Labour Party. By far the most powerful and cutting speech came from Shadow Foreign Secretary Hilary Benn, who delivered a sweeping and persuasive bugle call for war – gaining minutes of cheering and applause from the Labour and Conservative benches. It looked very much like a leadership bid to the Blairite wing of the party.

Following the Tories and the Labour rebels into the fray, were the remaining dregs of the Liberal Democrat party. Tim Farron, like the Blairites, has clearly not learned the lessons of his party’s destruction.

The case for airstrikes is an absurdity. It boils down to a face-saving measure for Britain to ‘be seen’ to be standing with its allies, even in error. Furthermore, there is no claim that the airstrikes will provide any real deterrent or degrade the capability of ISIS (Daesh). Don’t take the left’s view on that, the conservative-led Foreign Affairs Select Committee rejected the plans for the same reason.

Jeremy Corbyn called on the conscience of the house, with a quiet dignity, given the excruciating attacks he was about to face from belligerent Blairites.

Angus Robertson called on first the Prime Minister, then the Foreign Secretary, and then the entire Conservative Party to tell him how many of the 70,000 Syrian fighters the government are expecting to act as our ‘boots on the ground’ are moderates or fundamentalists. The Foreign Select Committee have of course confirmed that these fighters are nearly all extremists, and often busy fighting each other. The coalition were unable to hold Iraq together with hundreds of thousands of their own troops – yet today, the plan in Syria is that mere tens of thousands of infighting militia men will topple Daesh, Assad, and establish a democracy.

Davis piled in later with a devastating assault, delivered in matter of fact tones. Perhaps the most staggering point he made was about the efficacy of airstrikes. In the current campaign of airstrikes, the US has run 10,000 sorties, taking out 15,000 targets – under the stated mission of degrading Daesh. Yet, during these campaigns, membership of Daesh has nearly doubled – rising from 15,000 to 30,000. As Davis put it, a sick irony of recruiting a new fighter for every target struck.

In short, the most likely outcome of Britain’s planned intervention in Syria, will be to kick start yet another phase of civil war. This would just as likely strengthen ISIS (Daesh), as weaken them – killing yet more civilians in the process.

Despite this call to common sense, David Cameron and England’s permanent political class is marching us into another reckless military intervention in the Middle East.

It is becoming ever more clear that the Blairite faction of the Labour Party in Westminster has become a part of a permanent political class alongside their Tory and Liberal Democrat counterparts. They have become used to taking advantage of disengagement and voter apathy to enjoy a fairly stable job, and just a few seats lost and won either way each election and no big surprises; the chance to earn a great wage and pass policies which guarantee lucrative consultancy/director roles after politics. All this has been done with the passive acceptance of a disaffected electorate, nearly half of whom don’t even bother to vote anymore. To this permanent political class, a popular movement based on social democratic values is about as welcome as a fart in an elevator.

But then the Scotland rose from the failed Independence vote, and delivered the anti-austerity, pro-Independence SNP landslide. Shortly after, England joined in by delivering socialist Jeremy Corbyn a greater landslide in the Labour leadership contest in 2015, than Blair did in 1994. The ‘unelectable’ Corbyn galvanised a thumping majority against a hostile media, commentariat and even parliamentary party.

The permanent political class was wounded, but it did not die. Instead, they declared all-out war on the opposition.

The War On Independent Thought

First, the mainstream media south of the border has virtually ceased reporting on the activities of the SNP – despite the party holding 56 seats in Westminster and providing a relentless counterpoint to austerity politics. Plaid Cymru and the voice of Wales on key issues is also practically non-existent, and ditto Northern Ireland.

Secondly, the unrelenting assault on Corbyn from print, TV and radio journalists – and almost the entire political class – is virtually unprecedented in our history. This has gone far beyond the legitimate role of the media to bring probity to politics. This is nothing short of propaganda. From the BBC to Sky News, the Daily Mail to The Guardian – there has been almost blanket scaremongering and character assassination. So much so, that making a balanced appraisal of Corbyn’s policies or challenges has become almost impossible. Even in the independent media, we have to spend so much time debunking fallacious attacks on the Labour leader, we barely have time to allocate to interrogating elements of his performance with which me way find issue.

In the run up  to the Syria vote, we even had headlines from The Telegraph and The Metro, blaming Corbyn for failing to stop the war they are backing. His crime? Failing to whip his MPs. We at The Canary understand the conflict Corbyn experienced here. He is passionately against war, but also passionately for democracy. In this light, we feel it was right for the Labour leader to hold a free vote on the airstrikes, as a matter of principle. But this does place a huge responsibility on Corbyn and his allies to win the debate within the party. Come 2020, the public need to know that if they vote Labour, they will get Labour – not the discredited, vanilla conservativism of the Blairite faction.

And finally, we even saw the Prime Minister brand any MP planning to vote no to the airstrikes as ‘terrorist sympathisers’ – the night before the vote.

In summary – the war on the opposition is to ignore, attack and slander.

In the wake of this vote, there is a truly bitter pill to be swallowed by Scotland – as one Twitter user noted grimly:

56 out of 58 MPs from Scotland will vote against airstrikes, but the country will be used by UK govt as main strike base. #DontBombSyria

Indeed, the jets are were already being prepared to launch prior to the vote, from RAF Lossiemouth.

The permanent political class of England is delivering economic, social and foreign policy in its own interest, not the public interest. What this vote has proven, is that it is in the interest of the entire British opposition to neoliberal politics to unite in the pursuit of a nation (or four) which better reflects our values.