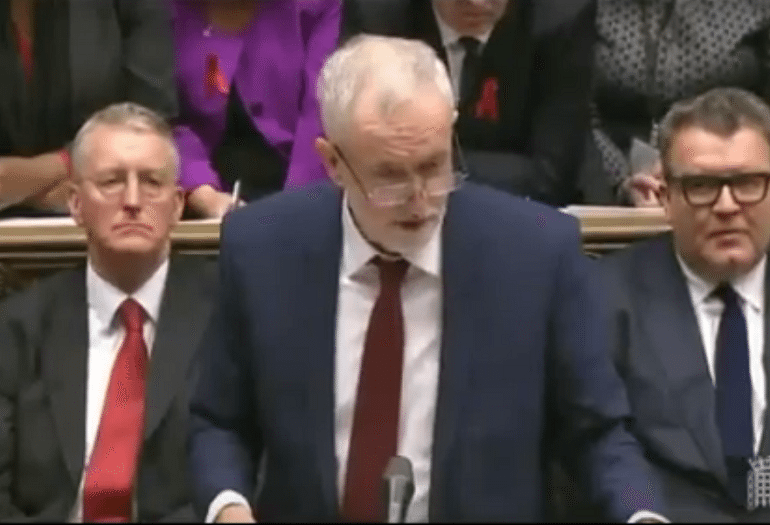 Labour leader Jeremy Corbyn alleged during the debate on UK air strikes in Syria on 2 December that David Cameron’s Conservative government was not being honest with the British people about the inevitable consequences of such a military escalation.

He insisted it was:

critically important… that we as a house are honest with the British people about the potential consequences of the action the prime minister is proposing to us today.

And this point was of great concern, he argued, because:

There are those with military experience… who have argued that extending UK bombing will… “increase the short-term risk of terrorist attacks in Britain”.

Yet more bombing in Syria will kill innocent civilians.

But Cameron was not focused on these issues.

To brand those who plan to vote against the government as terrorist sympathisers both demeans the office of the prime minister and… undermines the seriousness of deliberations we’re having today.

But Cameron refused to apologise.

Pro-war Labour MP John Woodcock, meanwhile, attacked anti-war figures in his party, saying he didn’t want it to become “the vanguard for a sort of angry, intolerant pacifism”.

In reality, this pacifism was not aimless and baseless as Woodcock suggested. Instead, it was a product of the dignified rage felt by Corbyn and others at the injustice of all civilian deaths – or the potential of such deaths – wherever they occur in the world.

And in the most poignant moment of the Labour leader’s argument, he quoted a constituent who had previously fled from Syria. Condemning the jeers of other MPs before he began, he said:

He then went on to quote the constituent, whose family live in Daesh-controlled territory:

My question to David Cameron is: Can you guarantee the safety of my family when your air forces drop bombs on my city?

And that is one of the key points of opposition to these air strikes. The government simply cannot and will not guarantee that innocent civilians will not be killed – a truth that very much merits popular indignation and serious concern.