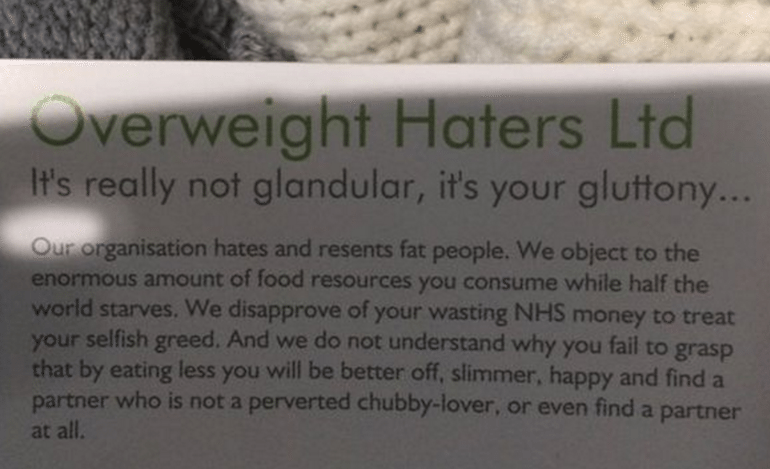 British Transport Police are investigating fat-shaming cards that are being handed out to women on the London Underground by at least two men calling themselves “Overweight Haters Ltd”.

Imagine you’re on the tube, minding your own business, getting on with your day. A man walks up to you and hands you a card that reads “fat” on one side and, on the other:

It’s really not glandular, it’s your gluttony… Our organisation hates and resents fat people. We object to the enormous amount of food resources you consume while half the world starves. We disapprove of your wasting NHS money to treat your selfish greed. And we do not understand why you fail to grasp that by eating less you will be better off, slimmer, happy and find a partner who is not a perverted chubby-lover, or even find a partner at all. We also object that the beatiful [sic] pig is used as an insult. You are not a pig. You are a fat, ugly human.

This is exactly what happened to NHS worker Kara Florish at Warren Street Station last weekend. And she’s not the only one. Twitter user @thomasknox says he witnessed something similar at Oxford Circus:

Young man just got on train at Oxford Circus, gave printed card saying YOU'RE FAT to overweight girl. He jumped off. She read it, & cried.

He told Metro.co.uk: “She didn’t even realise I was watching at first. Her stunned, desolate reaction was very real. Then tears.”

It sounds like the kind of playground bullying most perpetrators would grow out of before they hit big school. But amazingly, the bullies involved are fully-grown: one has been described as an “ordinary-looking, middle-aged man,” and the other as a bearded hipster, “smartly, trendily dressed”.

Body-shaming has become depressingly commonplace in our public spheres and our online spaces. Those doing it usually dress up their ritual humiliation of strangers as a public service, claiming that making people aware of their “problem” will help them to lose weight and improve their health.

They’re wrong – in so many ways.

Firstly, the evidence that overweight people are less healthy is hotly disputed. Some research suggests that people who are in the “overweight” BMI range actually outlive those with a “normal” BMI – and of course, many overweight people are healthy, while many thin people are not. Then there’s the evidence that, if the aim is to make people lose weight, fat-shaming just doesn’t work: it may even exacerbate weight gain – as well as damaging mental health.

The only thing fat-shaming does succeed at is exposing the perpetrators as idiots – as Twitter has been pointing out in style:

Dear Overweight Haters Ltd,
If you hand me a card, please ensure you have a tupperware container with you in which to carry home your teeth.

Meanwhile, plus size fashion brand Navabi is asking people to be positive:

We're getting cards printed & going to Oxford Circus to give to people. Feel free to use & do the same if you like ❤ pic.twitter.com/IeU7eIuUzC

And British Transport Police has said it is investigating the cards and asked people who receive them to get in touch on 0800 40 50 40 or by texting 61016 with details.

Body shaming pervades our culture – from what we see on our screens to what our children are told by schools. Now, apparently, there is more than one man out there who thinks it’s OK to hand cards to strangers on public transport, telling them what to do with their bodies before running for the exit. If fat-shamers really want to do the world a public service, maybe they could start by shutting up.