The SNP deliver the killer question during the Syria debate, leaving the Tories speechless (VIDEO) - The Canary 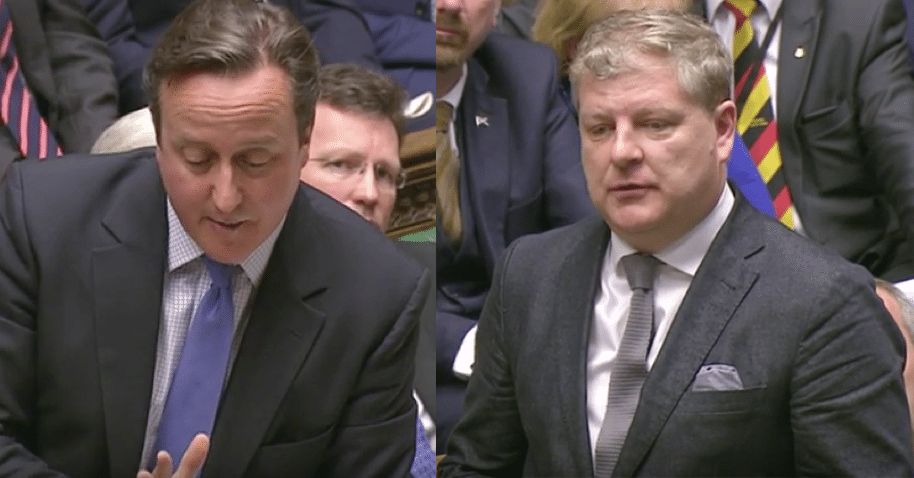 During the debate to support David Cameron’s motion to launch airstrikes in Syria, the SNP’s Angus Robertson MP asked a vital question which the Tory party and its leader could not answer.

Robertson called on first the Prime Minister, then the Foreign Secretary, and then the entire Conservative Party to tell him how many of the 70,000 Syrian fighters the government are expecting to act as our ‘boots on the ground’ are moderates or fundamentalists.

Robertson isn’t alone in pointing out the flaw in Cameron’s plans. The powerful Foreign Affairs Select Committee has voted against the proposed airstrikes.

The Foreign Affairs Select Committee is chaired by Conservative MP Crispin Blunt, and has a majority of Conservative members – yet this evening, the powerful committee has defied the government and expressed their opposition to the planned strikes. A Conservative member of the committee, John Baron MP, has written a piece for The Guardian outlining the reasons for the no vote.

The piece, entitled ‘I’ll defy my party leader, and vote against Syria airstrikes’ argues Mr Cameron has failed to learn the lessons of previously failed interventions in the Middle East, and is doomed to repeat them if he proceeds with the airstrikes. The MP writes:

“Though the government has precipitated another rush into military action, it has not yet constructed a realistic long-term strategy to destroy Daesh/Isis. On a recent visit to Middle Eastern capitals with the foreign affairs select committee, the officials we met were concerned we risk making the same mistakes as we made in our previous military interventions in Iraq, Afghanistan (post-2006) and Libya.”

And as for Cameron’s claim that 70,000 moderate Syrian ground troops are ready to take care of the ‘boots on the ground’ element of the war? John Baron MP confirms that on recent visits, his committee were informed there were precious few ‘moderates’ in Syria, and even the most moderate groups are unaligned and often fighting each other too. The result of placing our hopes on this fractured and incoherent opposition would be, argues Baron, to repeat the mistakes of the past:

“The government has forgotten the lessons of Libya, where the anti-Gaddafi forces splintered into a thousand militias the moment the common enemy was defeated. A fresh civil war has been a result. Syria would be similar, but on a grand scale.”

The coalition were unable to hold Iraq together with hundreds of thousands of their own troops – yet today, the plan in Syria is that mere tens of thousands of infighting militia men will topple Daesh, Assad, and establish a democracy. This is lunacy.

In short, the sum total of Britain’s planned intervention in Syria, would be to kick start yet another phase of civil war. This would just as likely strengthen ISIS/Daesh, as weaken them – killing yet more civilians in the process.

This last minute call to common sense by the Conservative-led committee has seemingly fallen on deaf ears. The reckless meddling of the Bush/Blair coalition started a fire in Iraq, Afghanistan, Libya and Syria. Now Cameron stands poised with a petrol can, ready to pour.