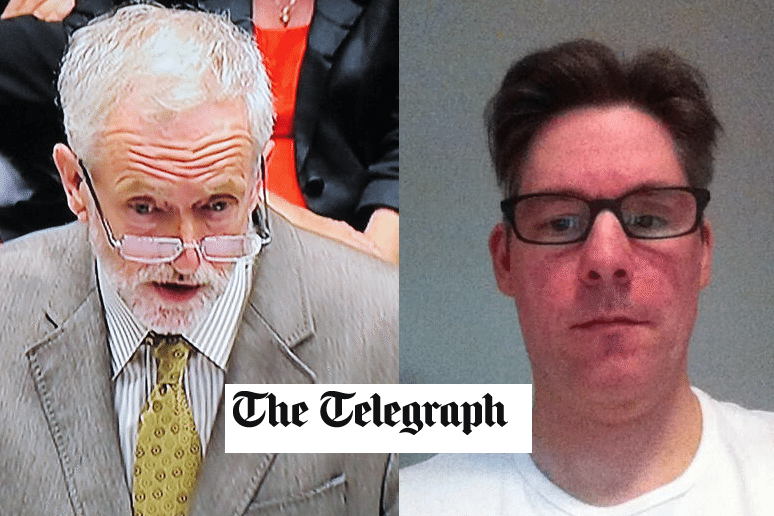 The idea that Corbyn and Powell are in any way comparable is ludicrous drivel and illustrates the desperation of the media elites.

They are polar opposites.

Corbyn was a steadfast opponent of apartheid in South Africa, to the point where he was arrested for protesting outside the South African embassy in 1984. While Powell was a staunch opponent of anti-discrimination laws:

Powell argued for the right for people to discriminate against others because of their appearance or nationality.

Corbyn recognises that the issue of immigration is overstated, and takes a humanitarian approach to the refugee crisis, saying:

By contrast, Powell’s infamous ‘Rivers of Blood’ speech called for sending immigrants back to their countries of origin, including their British-born children.

I shan’t be satisfied till I have seen them all settled overseas. In this country in 15 or 20 years’ time the black man will have the whip hand over the white man.

The two people are antithetical, not comparable. Hodges manufactures the comparison:

Powell was always at pains to paint himself as someone who did not personally entertain prejudice. He was merely an interlocutor between the body politic and those that did. He did not endorse racism.

He may have been “at pains to paint himself” in that way, but his ‘Rivers of Blood’ speech tells a totally different story. As we have seen, he was an active agent of prejudice, arguing against the free movement of people based upon their nationality, and arguing for the right to discriminate against others.

How does this relate to Corbyn, Mr Hodges?

Jeremy Corbyn is the same. Terrorists. Anti-semites. Isil apologists. He doesn’t share their views. But he offers himself as a conduit for them.

Back here again: ‘Corbyn is friends with terrorists!’ It was the Sun that originally reported that Corbyn is “friends” with Hamas and Hezbollah. This was echoed by the Guardian’s Polly Toynbee and bleated by Channel Four’s Krishnan Guru Murthy. Yet, the argument shows no understanding of social or political situations. Referring to a group as “friends” during peace talks does not mean they are your ‘friends’ like you hang out with them down the pub. The quote was taken out of context; Corbyn was employing diplomatic language to progress towards peace.

‘Well, he associates with anti-Semites!’ Accusations like these are largely based on fabrications originating in the Israel lobby, who routinely smear critics of the illegal Israeli occupation with similar allegations. It is, in fact, Corbyn’s longstanding support of the rights and freedoms of the Palestinian people, that led to this vilification.

‘But he parties with “Isil apologists”!’ Hodges seems to be referring to the Stop the War coalition here, echoing David Cameron in calling opponents of the war ‘terrorist sympathisers’. Do not dare look at the West’s role in the proliferation and exacerbation of terrorism, or you will be branded as such. Yet, looking at both sides of a conflict is a necessary step towards ending it. Journalist Dr Nafeez Ahmed suggests

Imagine if a Charlie Hebdo-style massacre erupted every other week in the US, UK and France, killing a dozen or so victims at a time.

This is what people in Iraq have experienced at the hand of Western military aggression: weekly Paris style massacres. The idea that this plays no role in rallying people to ISIS (Daesh)’s side is ludicrous. Especially as the recent massacre in France is enough to radicalise Hodges into supporting UK air strikes in Syria. Looking at the role played by Western foreign policy is a productive way to end the conflict; it does not make you an “Isil apologist”.

Besides, this ‘guilt by association’ tactic employed by Hodges is reserved only for those who challenge the permanent political class, like Corbyn. If Hodges looked into who people like David Cameron are friends with, the results would be much more pertinent. Cameron is a long-standing friend and ally of Saudi Arabia, who behead a person every two days. Or Margaret Thatcher, who was an ally of the brutal dictator Augusto Pinochet, a regime Corbyn opposed. Perhaps this selective criticism is why Hodges has been referred to as Cameron’s “favourite columnist”.

The latest attack on Corbyn not only follows a long line of media smears, but it is also fabricated from their components. And he is about as close to Enoch Powell as he is to an inter-dimensional alligator.