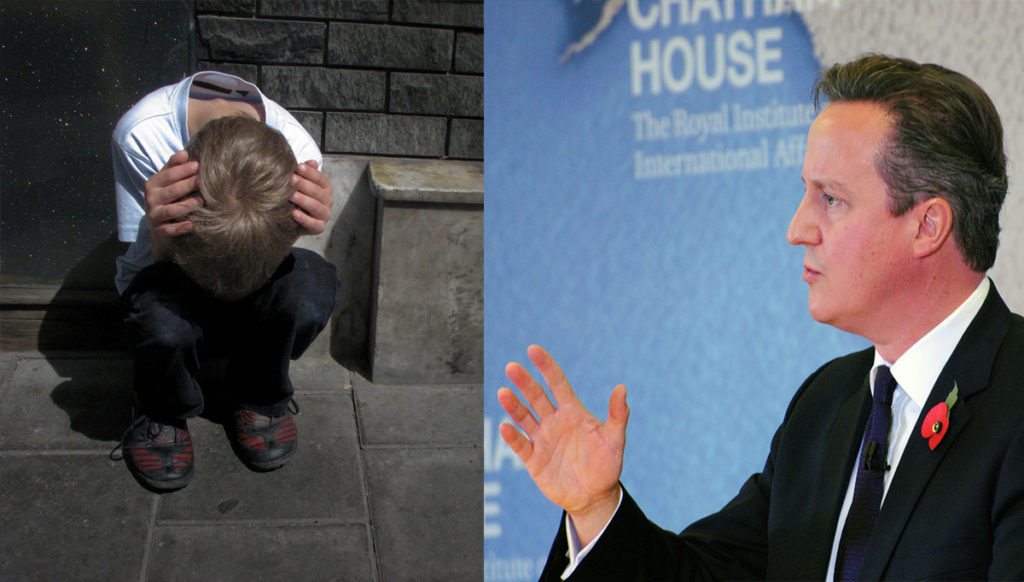 David Cameron’s 2007 vow to “make poverty history” is finally coming to fruition. In one fell swoop, child poverty as we know it may soon cease to exist.

Not surprisingly this owes more to the Prime Minister’s cunning sleight of hand than his transformative socio-economic policies.

With new laws on how the government measures child poverty reaching the final stages of debate in the House of Lords, Tory ministers are hoping for a Christmas miracle: the purge of 3.7 million children from the breadline. If the Lords pass this legislation, it will mark a new era of poverty prohibition. Poverty, as a concept, will become extinct, and with it, the government’s obligations to hit child poverty reduction targets under the 2010 Child Poverty Act.

Cameron has taken to shifting the goal posts in his “all-out assault on poverty”, favoring a measure of poverty based on one’s ‘life chances’ – or lack thereof.

Currently, the Child Poverty Act, which lifted 1.1m children out of poverty, contains four measures of poverty – all based on income. However, under the new Welfare Reform and Work Bill, poverty will be measured by more abstract targets such as worklessness and educational success. If the root causes of poverty are to be tackled, then factoring in these measures should be welcomed.

But these proposed changes to the measurement are problematic for one reason: to those at the bottom, money matters, particularly those growing up poor. As the Child Poverty Action Group (CPAG) note:

in the modern world, an adequate amount of money is needed to participate fully in society.

With the government on course to miss their target of reducing the percentage of children living in poverty to less than 10% by 2020, the incentive for this overhaul is painfully transparent. Moreover, the latest projections from the Resolution Foundation suggest that the amount of children in poverty is expected to rise by one million by 2020. Given the scale of the inter-generational inequality this unchecked tinkering could lock-in, it’s galling to see the government compromising the future prospects of these children so readily.

Rebecca is a parent to one of those children. Although the mother-of-two and her husband work full-time, they still struggle to make ends meet. Shocked upon hearing of the government’s plans to scrap child poverty targets, Rebecca launched a petition to call on the Lords to insist that the government keep its targets to reduce child poverty.

Reads her petition, which has more than 48,000 signatures at the time of writing, on Change.org.

Food seems to be the only expense we have immediate control over, so that budget gets squeezed, and our home isn’t as warm as we would like through the winter.

If one works full time they should earn enough to live on; paltry, below-inflation wages are the real issue at play here. And the introduction of a legitimate living wage is the solution, not legislative sorcery to sweep it under the rug. Rebecca added

We must not let this government side step their accountability, their responsibility, their duty to the children of this country

By erasing poverty from history, David Cameron is willfully glossing over the link between a lack of resources and social mobility. Under the new measures, to be poor is to be a lesser person; a less well-rounded individual and forms a societal construct that strikes to the heart of one’s identity and sense of self. In effect; to be poor will no longer be defined by what you have, it’ll be defined by who you are.

For all his posturing, it appears as if the sun is setting on David Cameron’s new dawn of compassionate Conservatism. From tax credit cuts to scrapping child poverty reduction targets, the working poor are beginning to see his true hand.