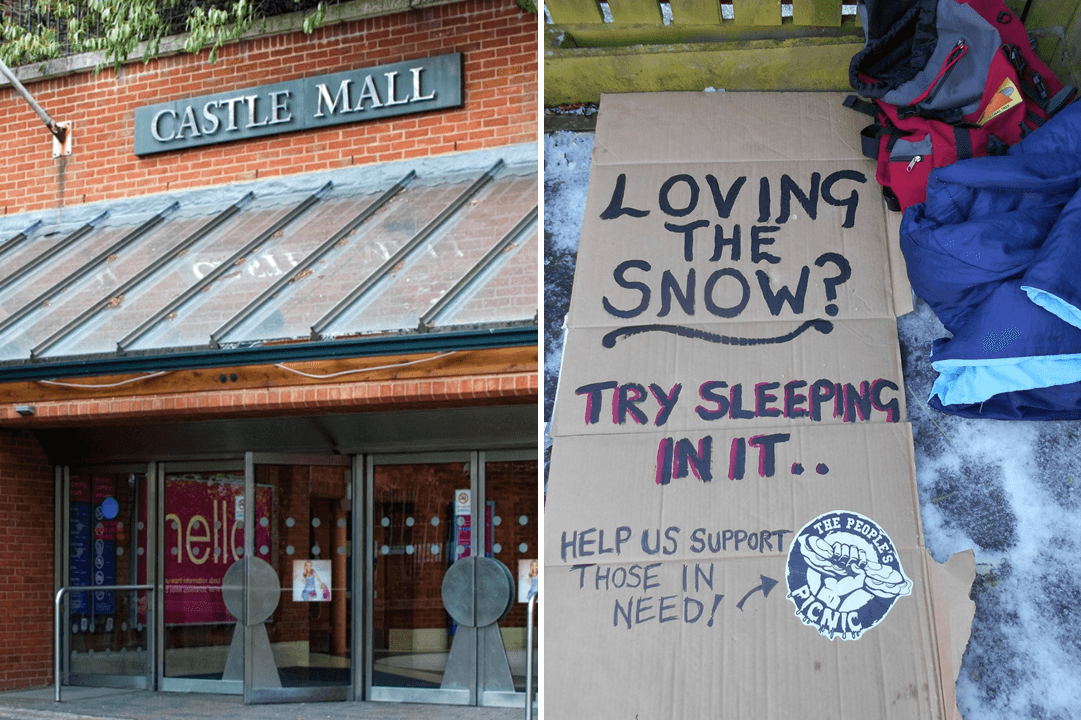 In a heartening example of people power, managers at a Norwich shopping mall have been encouraged to take action after a callous act of cruelty by one of their security guards.

In a Facebook post, the People’s Picnic, a group which helps feed the homeless and hungry in Norwich, reported that a group of rough sleepers seeking shelter in a doorway at the back of Castle Mall had been approached by a member of the mall’s security team. The guard (reportedly laughing) was said to have thrown a bucket of cold water over the group, leaving them drenched and their sleeping bags wet.

Now it would be nice to think that this sort of thing only happened in cartoons, a consequence-free world where everyone has a quick chuckle and carries on as if nothing has happened. The initial response from a Castle Mall spokesperson certainly suggested they were treating the whole thing as a made-up tale.

However, as word spread online the good people of Norwich and Norfolk contemplated the worsening weather and considered just how much they would enjoy spending a freezing night wet through in a sodden sleeping bag. Perhaps memories were jogged of the deaths of other homeless people in Norwich recently. Living on the streets is a constant battle against exposure, neglect, hunger and loneliness and the attitude that sees such people as dirt to be washed away can be the final straw.

Castle Mall found itself swamped with requests to investigate properly, as well as a number of negative reviews and pledges to boycott the shops. There were some suggestions from Facebook commenters that such action was over the top but it proved to be highly effective. A day after the initial denials, Centre Manager, Amanda Phillips, announced that a joint investigation had been carried out along with Interserve, the company that provides security for the mall.

We have found that an incident did occur on Sunday evening, and one of Interserve’s employees in the security team has been suspended on the grounds of gross misconduct and is no longer working at Castle Mall.

This is quite a turnaround and there is no indication as to what evidence was discovered that had been missed the first time. It is perfectly possible that, having expected to be able to brush the incident off, the mall was then compelled by ‘reputational management’ considerations to undertake a proper investigation.

Interserve have also been effusive – late in the day – in their apologies:

We are very sorry for what has happened and are extremely disappointed with the behaviour of this individual, which is against everything we stand for as a company. We work closely with several charities for the homeless and take the issue very seriously. We will be making a donation to local homeless charities by way of an apology.

No one wants to see a person sacked but equally, people knew that if they said nothing, they would be allowing this terrible kind of behaviour to become normal and acceptable. Instead, the people of Norwich have made a clear statement that they value the lives and dignity of those without homes. And that is something to be very proud of.

Support your local homeless support projects – they’re almost always in need of food, clothes, blankets etc. (But do check what they need in advance.)