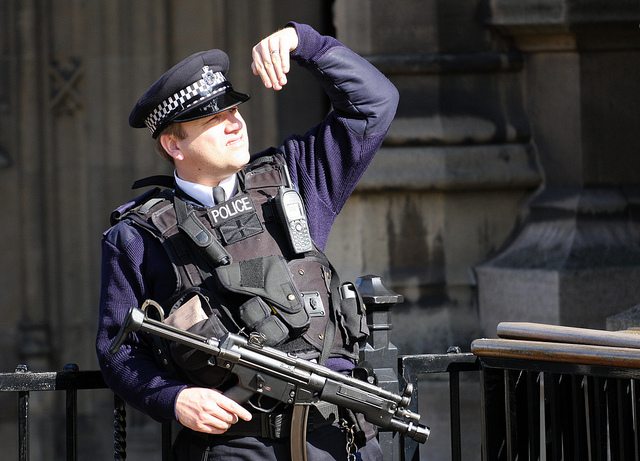 The commissioner of the Metropolitan Police, Bernard Hogan-Howe, has announced plans to arm a further 600 officers in London, bringing the total of firearms officers in the capital to 2,800.

Hogan-Howe has said these measures are “vital” in “keeping us safe”. However, as the following cases prove, arming more officers doesn’t make any of us safer.

28-year-old Jermaine Baker is the most recent person to be killed by firearms police officers. He was shot dead whilst sitting in his car near Wood Green during an intelligence-led operation into an alleged attempt to free two gang members from custody.

However, despite familiar sensationalist headlines in the aftermath of his death claiming he was a “gangster”, the Guardian reported that there was no evidence he was linked to gangs at all. A source, who is described as someone with “close knowledge of anti-gang efforts in the borough” stated:

Our records do not show he was involved in gang activity.

Furthermore, a friend of Baker has claimed that he was asleep in the car when he was shot in the neck, leading community spokesperson Darren Henry to claim “police officers murdered Jermaine”.

A firearms officer has been arrested, and the inquest will resume in 2016.

Mark Duggan was shot and killed in August 2011. Despite police claiming he had a gun in a sock, the inquest into his death found he was unarmed at the time he was killed. Like Baker, he was smeared in the press as a gangster, this was aided by police officers, one of whom testified at his inquest that he was “among Europe’s most violent criminals”. However, no evidence was given to back up this claim, and Duggan only had two convictions for minor offences. Furthermore, an image of Duggan grieving at his daughter’s funeral was deliberately cropped to accompany gang related articles.

Despite being unarmed, the inquest jury still ruled it was a lawful killing. Speaking outside the court, his aunt, Carole Duggan, stated:

The majority of people in this country know that Mark was executed. We’re going to fight until we have no breath in our body for justice for Mark, for his children.

The Duggan family have been given leave to appeal the lawful killing verdict and the case is still ongoing.

Jean Charles de Menezes was an innocent electrician who was killed when armed officers fired seven bullets into him, having mistaken him for a terrorist at Stockwell underground station. Despite the shooting happening while de Menezes was pinned down on a chair, the police have been criticised for not correcting untrue information that had mysteriously entered the public domain. This included suggestions that he was wearing bulky clothes, and that he was attempting to get away from officers by vaulting the barriers at the station. Solicitor for the family, Harriet Wistrich, said of the case that it “raises very, very serious questions about the shoot-to-kill policy,” and that it showed how dangerously it could go wrong. She further stated:

He was not carrying a rucksack. He simply had a denim jacket. Was it necessary to shoot him dead as opposed to trying to confront him at an earlier stage.

There was no indication he was about to blow himself up at all […] he was just unfortunate to be living in a block of flats that was under surveillance and to look slightly brown-skinned.

An inquest into his death reached an open verdict, and the family have been paid compensation. However, the controversial decision was reached not to prosecute any of the officers involved; this is currently being challenged in the European Court of Human Rights.

Azelle Rodney was shot six times by an officer in 2005 after his car was stopped. Whilst firearms were recovered in the car, and the two passengers pleaded guilty to firearms offences, there was no evidence of a gun being in sight at the time Rodney was fired upon, raising serious doubts as to how the officer perceived there to be a threat to his life.

Although the police officer was prosecuted for murder, he was cleared by a jury during his trial last year. The officer, Anthony Long, claimed he was acting on intelligence, and shot without warning because he believed himself and other officers to be in danger.

He did not deserve to die and we do not have the death penalty in this country.

Harry Stanley was unarmed when he was shot by police in 1999. Police had received reports he was carrying a sawn-off shotgun. However, this turned out to be a table leg he was carrying in a bag after having had it fixed. Whilst the inquest into his death found it to be an unlawful killing, there was no prosecution of the officers involved.

These cases are only the tip of the iceberg. According to Inquest, there have been 58 fatal shootings by the police in England and Wales since 1990, with 24 involving the Met Police. A third of those shot in London were from Black and Minority Ethnic (BME) communities.

Time and again, officers have been cleared of wrongdoing on the grounds that they were acting on intelligence. However, the intelligence is generated by police forces accused of institutional racism, and who seem to be more concerned with spying on grieving families – 18 families have had undercover officers infiltrate their campaigns – than they are with finding accurate information. Therefore, there have to be serious questions raised about the nature of this ‘intelligence’.

These cases, and others, demonstrate the very real risk in arming more police officers, especially for BME communities. Armed officers killing unarmed people without warning, based on unfounded or mistaken intelligence, already happens too often; increasing the number of armed police is only likely to add to the frequency of these lethal blunders, contribute to existing community tensions, and cause the deaths of even more innocent people.

Support the United Families and Friends Campaign. They organise a march every year, and publish information on when inquests and other ways to support the families of friends of those who have been killed.

Donate to, or if local, volunteer with Newham Monitoring Project (NMP).