These are the effects of austerity on higher education, and it's worse than we thought - Canary 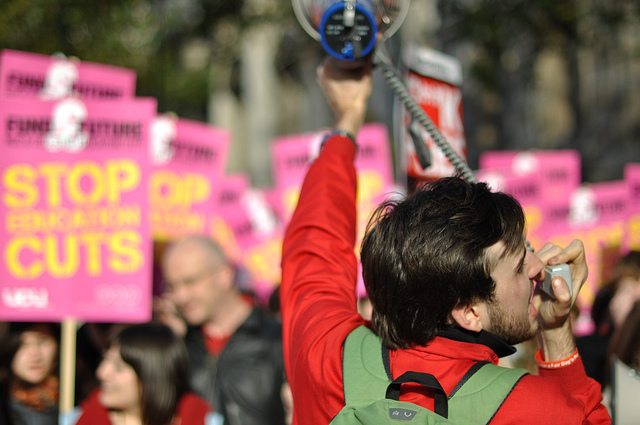 On 14 January, the government decided to scrap maintenance grants for low-income students, effectively pricing out over 500,000 young people from higher education – unless they take on a maintenance loan.

The controversial motion was passed through a parliamentary backdoor by a committee made up of 18 MPs, half of which belong to the Conservative Party. This is just the latest in a long string of backhanded attacks on the livelihood of students, but pressure from the National Union of Students (NUS) has meant that the issue will now be debated on Tuesday 19 January.

This is the membership of the committee debating student grants. Tories are starred, SNP added only yesterday. pic.twitter.com/FIUiLNcixm

Almost six years have passed since the coalition government first embarked on its comprehensive plan to turn universities into cash-cows for the free market. In that time, students have seen a massive hike in tuition fees, up to £9,000 a year, and have been forced to take on loans that many will never pay back. Students who started their degree under the new fees regime will begin their graduate life with an average debt of £44,000, and this debt will most likely haunt them for decades.

At the same time, the cost of living in student accommodation has soared over the last few years; the Guardian has reported that almost half of students in the UK are now struggling to pay their rent. Indeed, between 2010 and 2013 rent for students rose by 25%, compared with 13% for the wider housing market.

According to Shelly Asquith, vice-president (welfare) of the NUS, the costs of housing can take up to 95% of student finance available, including the now-defunct maintenance grants. On top of all this, many students have complained that they’re being put up in sub-standard living conditions for extortionate rates.

In one student hall in Central London, the situation got so bad that 150 students held a rent strike against their housing providers, in protest against their absurd situation: charged £147 per week for a tiny room, and forced to endure cockroach and rat infestations, as well as mould and persistent infrastructure problems.

In such living conditions, it’s an amazing testament to the resilience of students that they can keep up with the pressure of full-time study. Unfortunately, the state of affairs is beginning to take its toll.

In December 2015, the NUS published a survey that found that 8 out of 10 university students have experienced mental health issues in the last year. Maddy Kirkman, disabled students’ officer for the NUS, said:

These findings are deeply concerning, and reaffirm the stark challenges that persist around providing effective support to students in universities and colleges.

Alongside the impact of funding cuts to student support, including maintenance grants and the disabled students’ allowance, this shows a worrying lack of concern for students living with mental health issues.

This being said, it is all too simplistic to solely draw a cause-effect relation between the woes of student finance and mental health. The situation is far more complicated than that. Leaving home for the first time, feelings of loneliness or isolation, and the constant stress of academic life that many students go through may all be part of the equation.

What can be said, however, is that David Cameron is effectively overseeing a radical transformation in the way the university functions as a space of learning. Students are being redefined as “consumers”, and by the same token educational institutions are requalified as “educational providers”, competing in a marketised environment to offer young people the best “value for money” for their education. But has it worked?

A recent poll has found that 27% of first-year students are either thinking about dropping out of their courses, or have done so already. Amongst other reasons, respondents said they wouldn’t be going back because of expenses, not liking their courses or their universities, or because they were “disenchanted with higher education”. All in all, it seems that the government’s plan to boost educational quality and student satisfaction by adding a competitive edge to the higher education sector has achieved the exact opposite.

The Conservatives’ rationale for austerity in higher education is roughly the same one they use for austerity in general; we need to bring in “external providers” in order to guarantee a “level playing field”. More competition will “drive up quality” and “drive down prices”, and in the long run, this will help Britain keep its “strong economy”. This is the same rationale behind the government’s latest Green Paper, dubbed the Teaching Excellence Framework (TEF).

Presented in November 2015 by the Minister of Higher Education, Jo Johnson, the TEF is meant to assess the quality of teaching in British universities through a complex system of metrics. These include drop-out rates, graduate employment rates, and scores in the National Student Survey (NSS). Depending on the score they achieve, universities may be allowed to hike up tuition fees above inflation rates. In other words, they will be allowed to charge students as much as they want, so long as the numbers add up according to the TEF metrics.

In concrete terms, this means that from September 2016 there may be even more competition within the higher education sector, and the incentive of making profits on students (read: consumers) will become an overdetermining factor. But will this translate into better teaching? As Stefan Collini writes in the London Review of Books:

What will the TEF actually produce? At a minimum, the following: more administrators to administer the TEF; a greater role for business in shaping the curriculum and forms of teaching; a mountain of prose in which institutions describe, in the prescribed terms, how wonderful their provision and procedures are.

It also seems pretty certain to produce more efforts by universities to make sure their NSS scores look good; more pressure on academics to do whatever it takes to improve their institution’s overall TEF rating; and more league tables, more gaming of the system, and more disingenuous boasting by universities about being in the ‘top ten’ for this or that.

What is it unlikely to produce? Better quality teaching.

Back to the drawing board?

The deadline for submitting written responses to the Green Paper was on 15 January 2016, and on this particular issue it seems that the higher education sector is unified in its response. The NUS along with several other Student’s Unions have criticised the government’s policy proposal, arguing that:

The new system will be more centralised and politically controlled than ever. It will be used to force through more marketisation and privatisation and allow tuition fees to rise even further, potentially further undermining academic freedom, student voice, representation and participation.

Respondents have also pointed out that the TEF pays lip-service to social mobility and widening participation without offering any concrete measures in this direction. Instead, the TEF will use this data as the basis for more competition between universities. This means that the onus for addressing social mobility is now on the universities, whilst the government continues to take little to no responsibility for addressing the root causes of inequality.

The University and College Union (UCU) has also criticised the government’s proposals, highlighting the fact that this major reform is being proposed at the same time as many academics are working on highly unstable temporary contracts.

Last but not least, Universities UK, representing the executive heads of British universities, has argued that the proposed system is “disproportionate, burdensome and counterproductive”.

No matter how you look at it, what the TEF is essentially putting forward is a comprehensive transformation of the Higher Education sector, one that will further increase market competition, bureaucracy and the role of business in academia. But the experience of the last years six years of marketisation has shown us that this doesn’t help students, nor does it help the universities themselves.

The Labour Party have called for an opposition day debate on Tuesday 19 January at 1.30 pm to oppose scrapping maintenance grants. Contact your local MP – we can still win this fight.

If you’re a student living in sub-standard conditions, you can share your story with the NUS here.

Let the government know what you think about their plans to further marketise higher education with the hashtag #TEFoff.