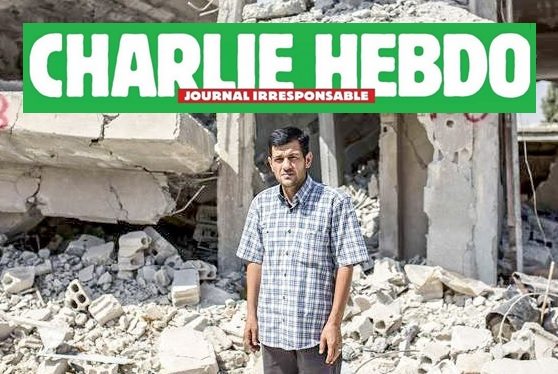 Have you ever heard a joke that’s just not funny? Or one that actually makes you cringe? Or even one that forces you to challenge the joke teller? Well you’ll probably be able to add the following cartoon to that list.

The French magazine Charlie Hebdo, which was made famous outside France after it suffered a terrorist attack on 7 January 2015, recently released a very controversial cartoon. In this piece, the author apparently suggests that drowned refugee child Alan Kurdî would have grown up to be a sex predator. Sound disgusting? Have a look:

The Guardian’s Jonathan Freedland commented soon after the cartoon was published:

Laughing at the weak is never funny, and there is nobody weaker than a dead child washed up on a beach.

Freedland admits that the magazine’s target may have been the fickleness and “wildly oscillating generalisations” of the western press, which sometimes casts all refugees as saints but then casts them all as sinners. But even if this was the cartoon’s purpose, he stresses, it only made matters worse – not better.

And with Ben Hayes at Open Democracy insisting that Charlie Hebdo has a “predilection for Muslim-baiting”, we may well suspect there is a sinister undercurrent behind the distasteful cartoon.

Reaction to the cartoon

In the aftermath of such fruitless offensiveness, there is no wonder that the student union of the University of Manchester has banned Charlie Hebdo, alongside papers like the Sun and the Daily Star. Nor is it surprising that there have been calls for journalists’ unions to boycott the magazine.

Rania Khalek from Electronic Intifada posted the following comment on Twitter to emphasise Charlie Hebdo’s misuse of freedom of speech:

Cartoonists also responded to the depiction, showing a Charlie Hebdo artist dipping his pen in the blood of Alan Kurdî:

Jordan’s Queen Rania also joined in the chorus of criticism. She commissioned the following cartoon proposing an alternative future for Kurdî:

Aylan could've been a doctor, a teacher, a loving parent…

neither funny, nor does it express anything meaningful in any way.

She also used the opportunity to stress the context in which Alan Kurdî’s family had fled Syria:

Alan Kurdî was a Kurd from Kobane, the bastion of resistance against ISIS. Kobane restored hope in humanity, and above all, it has shown the world the strength and power of women against fascism.

She makes reference here to the Kurdish-led defence militias of Rojava in northern Syria, which have been blockaded by western allies in Turkey and Iraq but have nonetheless built a secular, democratic, and multicultural alternative to the brutal sectarianism of the Wahhabi jihadists that surround their communities. (It was precisely the west’s failure to support Rojava and seek a negotiated solution to the Syrian civil war that led Kurdî’s family to flee Syria.)

At the same time, Dirik stresses:

Perhaps, like most organized Kurdish youth in our communities in Europe — most of whom also once arrived as refugees there — he would have become an active advocate of free speech, a political activist, a defender of rights. He would have grown up with, and gotten used to women in leadership roles all around him.

Meanwhile, Kurdî’s father also spoke to the press, saying Charlie Hebdo had shown itself to be “inhuman and immoral”. In fact, he asserted that their actions were almost as dangerous as those perpetrated by the “war criminals and terrorists” responsible for death and displacement in Syria and elsewhere in the world.

It’s not big, and it’s not clever

But Yazan al-Saadi’s comments at Open Democracy perhaps summarise the reactions to the cartoon most effectively. Al-Saadi insists that there is “nothing heroic” about “picking on the identities and beliefs of minorities”. Instead, he stresses that real satire should be:

an act that punches up to power, and not down to the weak

In other words, freedom gives us the ability to be crude and discriminatory. But that doesn’t mean we should use free speech in this way. Freedom is precious and can be an incredibly revolutionary tool – harnessed in the interests of justice and truth. It can expose the crimes and the lies of the powerful. It can protect the most vulnerable people in society. And it can share the truth in a way that inspires creation and innovation.

Call on David Cameron and your MP to push for recognition of the democratic experience of Rojava and for a negotiated solution to the Syrian civil war.

Support the Canary in its efforts to use freedom of speech in a positive and productive way – to protect the vulnerable and hold the powerful to account.