Are the police lying about undercover policing? - Canary 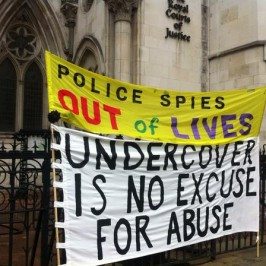 Assistant Commissioner to the Metropolitan Police Martin Hewitt has claimed the Met “no longer carries out long-term infiltration deployments” on protest groups. In other words, the police are now saying that there are no longer any undercover cops who have been working in these groups for over a year at a time.

Hewitt made his comments after an investigation by activists led The Guardian and Newsnight to reveal yet another shocking case of an undercover officer having had a sexual relationship with a protester. During a two-year relationship, officer Carlo Neri even proposed to a protester known as Andrea, despite already being married with children. Andrea is suing the police and has called his actions “abusive, cold-hearted psychological torture”.

Like other undercover officers, Neri, who was involved in the Socialist party and anti-fascist groups, blamed his departure on having a mental breakdown. However, he further said he was thinking of killing himself after his father in Italy had died and he had discovered that his sister had been sexually abused by their father.

Speaking to Newsnight, Andrea’s lawyer, Harriet Wistrich, who is also representing the other women deceived into relationships with undercover officers, said:

This is one of the worst I’ve heard in terms of inventing a whole story of sexual abuse and violence that didn’t actually exist and I think that was a particularly sick thing to do.

There are also accusations that Neri had two further sexual relationships with women whilst undercover, including suggestions that he married and had a daughter with one of the activists.

It has been a bad couple of weeks for the police regarding undercover policing and the surveillance of protesters. Earlier in the month, whistleblower David Williams – who worked with the National Domestic Extremist and Disorder Intelligence Unit, a later incarnation of the unit that deployed Mark Kennedy – claimed that files kept on the Green party peer Jenny Jones were destroyed by police. In a letter written to Jones, Williams described what happened:

Last week, the police withdrew their defence and admitted liability in a case brought against them by Kate Wilson, following her two-year relationship with Mark Kennedy. In a powerful interview on the Today programme, Ms Wilson pointed out that they didn’t just admit liability about Kennedy’s actions, “but against his superiors, the managers”. However, as she further said, “we don’t know who they are” and “they have refused to give us answers at every turn”.

Having worked with the other women bringing cases against the police, Ms Wilson does not see Kennedy’s behaviour as that of a rogue officer, as senior officers first tried to portray him, but as emblematic of other officers:

This was something that has been going on for 40 years. The way that these officers behaved is very similar. It really does seem to be an institutional practice that has been part of how they infiltrate these groups.

The police’s decision not to defend the claim is clearly motivated by a determination to avoid disclosure of documents relating to the undercover operations, at any cost. Alongside recent revelations that they are unlawfully destroying files, it makes you wonder what further horrors they are really trying to hide.

Are the police lying?

Given this is a highly secretive organisation with an extreme reluctance to disclose any material, it is impossible to say with certainty whether are not the police are lying over their claims that they are not deploying any more long term undercover officers. Certainly there is a great deal of embarrassment amongst senior officers regarding the revelations which do not appear likely to abate anytime soon. There is also perhaps a desire to look as though they have cleaned up their act before the Undercover Policing Inquiry resumes this year.

This is a view echoed by one anonymous core participant in the inquiry. Speaking to The Canary, they said it was “possible the that the Met are concerned to convince the Pitchford inquiry that they have put their own house in order, and to deflect any further regulation”.

However, they were also cautious about the veracity of the police’s claims to have withdrawn long-term undercover officers:

If the Met has stopped spying on protest movements, that is fantastic. But I won’t hold my breath. Even if this claim is true, there does not appear to have been a change in written policy – so  if there are no current long term deployments in protest groups, that does not mean there will not be any in future.

Hewitt also tried to make the case on Newsnight that things had now changed in the governance of undercover policing:

All deployments are now rigorously assessed for necessity and proportionality and governed by a strict legal framework that is subject to independent oversight.

Despite this, the core participant, who has studied the new framework, was scathing about the new controls:

The authorisation process is still hopelessly inadequate. It is all too easy for the police to construct ‘justifications’ for spying on protest groups, particularly those that engage in the sort of behaviour that causes inconvenience or embarrassment to governments or powerful corporations. There is a culture in police forces of ‘hyping-up’ the threat from protest groups, exaggerating the seriousness or likelihood of any criminality or disorder, a practice which makes it easier for them to claim that the use of undercover policing and other surveillance strategies are both ‘necessary and proportionate’.

This ‘hyping up’ of threat was clearly illustrated in footage revealed this week of two protesters who were acquitted of violent disorder at Cardiff Crown Court. Despite widely exaggerated claims from the officers involved, CCTV footage showed police officers punching, choking and kneeing protesters who were “carrying out a peaceful occupation of the bank” in a tax avoidance protest. According to the defendant’s solicitor, Raj Chada from Hodge Jones & Allen:

We were very surprised that the trial continued when the Crown Prosecution Service had the CCTV footage, which was completely inconsistent with the officers’ statements.

Whether it is lying in court to cover up police violence, shredding documents, misleading the media over police shootings, or mishandling the undercover policing allegations from start to finish, the police have repeatedly shown they have no respect for the truth. They have tried to portray Kennedy as a rogue officer, used undercovers to testify under false names and not properly informed the Crown Prosecution Service – and now they are trying to convince us that spying on protesters is a defunct operation.

There are many reasons to be skeptical, and in refusing to supply any information, the police do not seem to be very keen to provide any answers or affirmations. It is therefore vital that the undercover policing inquiry demands that the names of all the long term and short term undercover officers are revealed – it is also highly likely that those deployed short term (for under a year) may also have had relationships or caused significant disruption to groups.

Only through this disclosure will those affected know the full scale of the operations against them, and then will many of those involved be able to seek justice. Furthermore, the inquiry needs to look at what is happening in the present, and not just focus on historical events. This is the only way we may begin to get to the heart of the truth and lies of this disgusting policing operation.

Follow the Campaign Opposing Police Surveillance’s calendar for upcoming events you can support. There is a public meeting in London on 21 January.