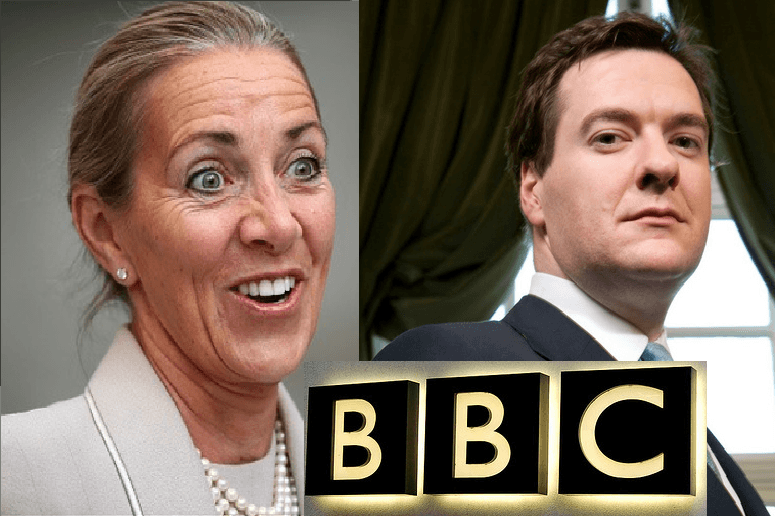 The BBC Trust has been blasted for shouldering the £750m costs of a Conservative manifesto pledge to maintain funding for over-75s’ license fees. The chairwoman of the BBC Trust, Rona Fairhead, has been accused of letting herself be “steamrolled” by George Osborne. Yet this suggests Fairhead was bullied into accepting this significant blow to BBC funds, when it is much more likely that she did it as a favour to Osborne.

Fairhead has entrenched ties to the Tory government. In fact, she and Osborne are old friends. Fairhead worked for the Conservative government as a cabinet office member, until being appointed by the previous Conservative culture secretary – Sajid Javid – as the new head of the BBC Trust. She is still business ambassador for David Cameron.

Fairhead has also sat on the board of HSBC directors for a long time. And what is even more shocking than her other Conservative links are claims that she was actually appointed chairwoman of the BBC Trust to keep a lid on Cameron’s involvement in covering up a £1bn fraudulent HSBC scam on British shoppers. Whistle-blower Nicholas Wilson made various freedom of information requests that confirmed that Fairhead’s appointment did not follow proper procedure. She was rushed to the position after the application date closed, with no mention of her on any contemporary media shortlist.

Her appointment does not coincide with the normal process, and many questioned why a business tycoon was right for the job. What it did coincide with was a string of interconnected visits from the BBC, HSBC, the Houses of Parliament and the Financial Conduct Authority (FCA) to Wilson’s website where he details the scam and the FCA and Cameron’s involvement in covering it up.

The FCA is meant to be a financial regulatory body but, according to Wilson, is colluding to cover up the fraud:

The BBC began visiting my website in July 2014 after I had exposed the collusion between HSBC and FCA which could have exposed David Cameron for his previous cover-up in 2010. The Director of News at the BBC James Harding is a close personal friend of George Osborne and was a colleague of Rona Fairhead at the Financial Times. Since Fairhead’s appointment the BBC do not report damaging HSBC stories not already in the public domain and censor any stories they do report.

It seems HSBC and their middle managers and PR agents at the Conservative party have placed a chess piece at the head of the BBC regulatory body. Rona Fairhead willingly crippling the funding of the public service to fulfill Tory manifesto pledges is just the latest instance of the Conservatives maneuvering the chess piece.

A BBC Trust that cared about the public it is supposed to serve would have pointed out that the pledge was for the Conservatives to continue funding the over-75s’ license fees themselves. Not for them to leech money from the rest of the license fee payers, who will get a lower quality service as a result. £750m amounts to almost 20% of the BBC’s current annual income by 2020, and Fairhead recently announced further cuts to sports programmes.

It appears the Conservative party will only fulfill election promises when they can drain the funds away from public services. At the 20 January prime minister’s questions (PMQs), Jeremy Corbyn challenged Cameron over his recent scrapping of the university maintenance grant. This joins cuts to child tax credits in policies the Tories failed to mention in their manifesto only a handful of months ago.

The Conservative licence fee policy is clearly political, as over-75s are among the citizens who most support the party. Thus, the Tories try their best to keep this age group on side. The contrast between how the young and old are treated by this government betrays how power-centric this government is, standing only for reelection. Rewarding elderly Tory voters may seem like obvious ‘politics’, but a government should be the guardian of public life and focus on creating a just society for all, regardless of who voted for them.

In short, the Tories have rinsed normal licence fee payers to the tune of £750m in order to implement a policy for their own political gain. This was met only by feigned resistance from their chess piece at the head of the BBC Trust, Rona Fairhead, and will lead to a public service which is squeezed even further.

The government should have no control over the funding and governing body selection process at the BBC. It is paramount to impartial coverage, and therefore to democracy, that the BBC is independent.

Perhaps if it was, it would not have such pro-Conservative coverage, turning the BBC News at 10 into a Conservative party broadcast, orchestrating a live on-air resignation to damage the leader of the opposition, and receiving accusations of bias left, right, and centre – from ex-BBC political editor Nick Robinson to a nearly 90,000 strong public petition.

Complain to the BBC here.

Write to your MP here.