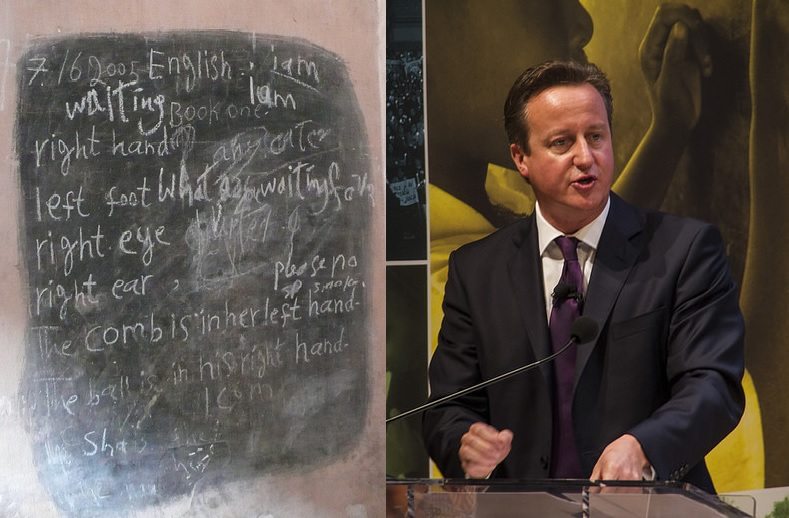 David Cameron has announced a controversial program to force Muslim women to learn English, or face deportation. According to Cameron, some 190,000 Muslim women cannot speak the English language well, or at all. However, Cameron has been taken to task over these statistics by investigative journalist Nafeez Ahmed and, embarrassingly, has been shown to be “fudging” the figures.

The inaccuracies were highlighted by Ahmed in an open letter to the Prime Minister. Cameron’s initiative was first announced in an article in The Times, and his figures are derived from this table (.xls) in the 2011 census. As Ahmed quickly identified:

Your statisticians appear to have derived their figure by arbitrarily excluding Muslim females aged between 3 and 15, while including those aged 65 and over. If the exclusion of those aged 3–15 makes sense, due to their being too young to be relevant, surely including those aged 65 plus (who are past the age of retirement and likely to now be grandparents) would misleadingly inflate the figures by incorporating an age group too old to be relevant.

As Ahmed points out, this is approximately 40,000 lower than Cameron’s assertion, and raises the question:

…why fudge your figures to inflate them that 40,000 odd extra, just to make the problem seem worse than it is?

This is not the only question people have raised following Cameron’s announcement. Tim Farron, the leader of the Liberal Democrats, has said:

David Cameron cut the budget for English language classes in August last year by £45 million. Now the Prime Minister is dressing up a massive cut as a £20 million funding commitment.

Speaking on BBC Radio 4, Cameron explained this incoherence, and lack of consistency, in his policy choices:

Well, this is more targeted…yes, budgets did come down in the past, because budgets were under pressure…but this is targeted money going after a particular area of problem.

That Cameron is “targeting” Muslims, and “going after” Muslim women in particular, has also come under scrutiny. Sara Khan, the co-founder of the charity Inspire, noted:

If the ambition of the Government truly is to integrate different communities then it is only right we should support all women from all backgrounds who are unable to speak English fluently, not just Muslims.

Nafeez Ahmed expands on this further. Quoting from the National Literacy Trust, he observes that:

So, with illiteracy affecting many in the UK population, and integration important in numerous communities, why is Cameron focusing so heavily on Muslim women? Cameron explains:

The reason for doing this is to build a more integrated country … but I think there is a connection with combating extremism … if you’re not able to speak English, not able to integrate, you may find therefore you have challenges understanding what your identity is, and therefore you could be more susceptible to the extremist message from Daesh.

This rationale, however, does not correlate with the facts. As many have already highlighted, the individuals who are known to have taken the jihadi path are often good English speakers. Also, as Ahmed points out:

… identity is affected by many other factors, which religious extremists prey on — foreign policy grievances, rising anti-Muslim sentiment in wider Western society, and a sense of alienation from both one’s ethnic and mainstream culture.

Unfortunately, it is unlikely Cameron – who has dismissed the impact of foreign policy on terrorism as “grievance justification” – will make any attempt to tackle the social, economic and political drivers of extremism. It is also hard to trust his enthusiasm for “integration”, as an advocate for, and alumni of, separatist elitist educational institutions like Eton.

This latest policy announcement, although cloaked in the language of concern, appears to be a way to put the Muslim community under further scrutiny. Making English classes widely available, to all who need them, is commendable – and surely welcome. But brandishing them as a weapon of deportation is, quite simply, not very British.

Write to your MP to let them know how you feel about this policy.

Get involved with charities who are already seeking to tackle extremism and gender inequality.