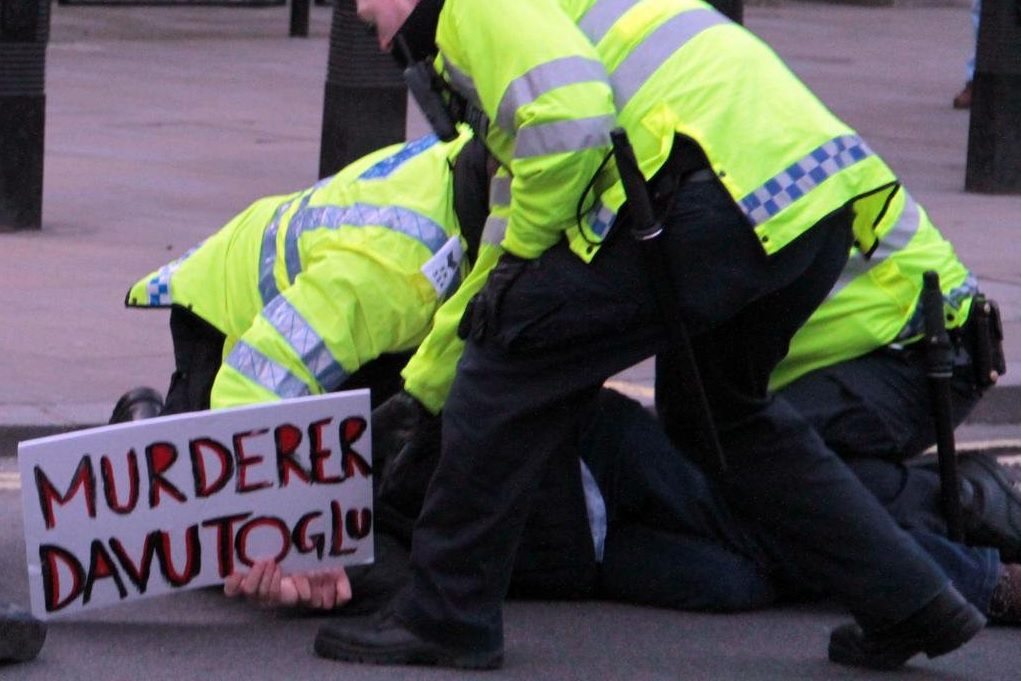 David Cameron is clearly very happy to refer to Labour leader Jeremy Corbyn as a ‘terrorist sympathiser’ without providing a shred of evidence. But the Prime Minister is in no position to cast the first stone on such issues having met with countless criminals and murderers during his time in office. One of these is Turkish prime minister Ahmet Davutoğlu.

Davutoğlu’s official visit to the UK on 18-19 January came amid a state-fuelled war on Turkey’s Kurdish communities which has killed at least 162 civilians, including an unborn baby. His regime has also been accused of supporting and cooperating with Daesh (Isis) while blockading the secular democratic experiment of Rojava in northern Syria.

In July 2015, Turkey broke off a peace process with the PKK (Kurdistan Workers’ Party) – which has advocated peace negotiations for much of the twenty-first century – after the ruling party failed to win an electoral majority. The PKK has also been one of the most effective forces on the ground at fighting against Daesh.

President Recep Tayyip Erdoğan has said his aim is for PKK members to be “annihilated” and for Kurdish areas in Turkey to be “cleansed” of their presence. Since the government launched its war, insists the Human Rights Foundation of Turkey, Turkish soldiers have imposed at least 58 curfews in Kurdish communities. These have killed children, disrupted the lives of around 1.4 million people, and left entire neighbourhoods destroyed. If this is not terrorism, one is left to wonder what the term actually means.

Given the Turkish government’s current record of cracking down on anyone who calls for peace – it has recently detained dozens of academics who demanded an end to its anti-Kurdish war – Davutoğlu’s visit to the UK has created quite a stir. On 18 January, hundreds of British and Kurdish activists protested outside 10 Downing Street.

Their vocal demonstration was surrounded by a heavy police presence. According to Kurdish Question, “officers used heavy-handed tactics against protesters, physically abusing many people” from the very start.

But the activists were undeterred, and shouted:

One of the banners at the protest, meanwhile, read “Davutoglu=War Criminal/ISIS Supporter”.

When Davutoğlu’s convoy was approaching Downing Street, a number of protesters broke the police cordon to ensure that the Turkish prime minister would feel their presence. Police officers soon arrested five demonstrators in response, including two minors. Pictures from the incident were soon put up on Twitter:

One of the protesters detained was activist Mark Campbell, who has long advocated for Kurdish rights on Twitter and Facebook. The following message soon appeared on Campbell’s Facebook page:

The UK Government is supporting Turkey. Turkey is committing genocide in North Kurdistan [inside Turkey] and is an active sponsor of several terror organisations the biggest being ISIS. Turkey since 2011 has sponsored and supported ISIS against the Kurdish people. The UK responds by inviting the Turkish Prime Minister in the first official invitation of 2016.

We made Turkish war criminal Davutoglu scuttle out the back entrance of 10 Downing St like the war criminal he is! Serkeftin! #TwitterKurds

Professor Noam Chomsky from the Massachusetts Institute of Technology (MIT) echoed these sentiments, but asserted:

Turkey is a valued ally, so, unfortunately, the US government is unlikely to lift a finger without large-scale public pressure

And this is true in the United Kingdom as well. Hence the protests over Ahmet Davutoğlu’s official visit.

But in spite of the authoritarian repression of peace activists and ethnically-motivated war crimes currently being committed by the Turkish government, David Cameron silence remains deadly. One can only assume that he sympathises with what Davutoğlu and co are doing over in Turkey.

To find out why Cameron seems to care so little about what his friends in the Turkish government are doing, please write to him about the issue. Please also write to your MP, write Mark Campbell a solidarity message on Twitter, and keep your eyes open for the next protest calling for David Cameron to change his stance towards Turkey’s genocidal war against Kurdish civilians. Also, if you think the British government needs to change its stance on the PKK, please sign this petition.