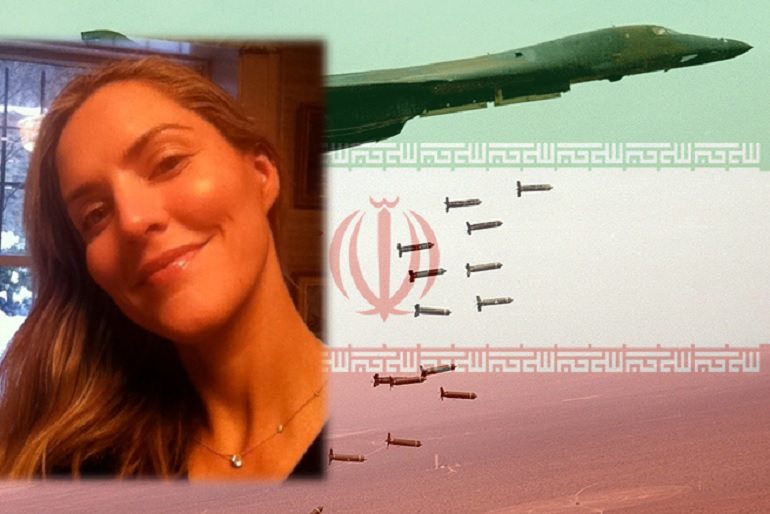 Former Conservative MP Louise Mensch is no stranger to controversy. She has been referred to as a “Twitter faux pas veteran” in the Huffington Post, and even the Mail has called her a “self-seeking publicist”. And while most political figures could be accused of egotism or putting their foot in it now and again – the ranks of outspoken warmongers are generally smaller. But with recent comments about her desire to bomb Iran, Mensch has been welcomed with open arms into this bloodthirsty group of conflict agitators.

Why did Mensch want to launch an attack on Iran?

This comment came in response to news the previous day that Iran had temporarily apprehended American sailors in the Persian Gulf as part of a routine dispute. The US navy had strayed into Iranian waters, so Tehran’s response was simply what would always have been expected. According to retired Marine Corps general Stephen Cheney, the US navy had “made a mistake” and “owned up for it”:

Whatever the fault was, it was ours.

But what followed in the USA was a chorus of “macho foreign policy posturing” from Republican commentators, asserts professor Daniel Drezner from Tufts University. Although the detained ships were soon released along with their unharmed sailors, he insists, the American right “flew off the handle”. The Washington Post’s Jennifer Rubin, for example, said the event was “humiliating” for the USA, while senator Tom Cotton called it a “brazen seizure”.

For her part, Mensch simply emulated the Republicans’ overreaction to this brief affair, tweeting even after the sailors’ release:

I will rejoice the day a new US President, a Republican, brings the hammer down on Iran

In reality, the short affair was essentially a trivial non-event. According to Haleh Esfandiari and Robert S. Litwak at the Wall Street Journal, the speed with which the issue was resolved is a sign that “more sensible counsels are prevailing in Tehran” under current president Hassan Rouhani and his political “preference for diplomacy and outreach”.

Why is war with Iran such a terrible idea?

Opposing war with Iran is not about fear, weakness, or support for the country’s regime. It is mostly just about common sense.

The Iranian regime is not a benevolent force. According to Reza Fiyouzat at Counterpunch, the government has proven itself since 1979 to be “prolific at legislating… anti-labor laws”. At the same time, it has asserted that its legitimacy does not come from the people but from God. Furthermore, Amnesty International insists that Iran sits alongside China and Saudi Arabia at the top of the international list of state executions.

But if we actually thought we could end all human rights abuses through war, consistency would see us committing ourselves to conflicts around the world almost perpetually. In simple terms, we would just run out of money. And the death and destruction created by war should also make it far more preferable to push for change through diplomatic means rather than launching a military assault.

Furthermore, while the American right argues that a conflict with Iran would be “a strictly limited affair”, according to Ted Galen Carpenter at the Cato Institute, this would not be the case. In fact, Carpenter stresses, this is “dangerous, delusional thinking”. The reality is that Tehran would almost certainly respond to a US attack, and the superpower and its allies would thus become embroiled in:

a new Middle East war that would make the Iraq and Afghanistan conflicts look like minor skirmishes.

In other words, the real motivation behind opposition to war with Iran is a simple understanding how international diplomacy works. It is about learning from the errors of the past. And it is about recognising that there are Western allies in the Middle East that have created just as much sectarian conflict as Iran’s theocracy – if not more. (Just think Saudi Arabia, Turkey, and Israel.)

At the same time, if the West’s main aim in the Middle East is indeed to defeat Wahhabi groups like al-Qaeda and Daesh, a further de-escalation of tensions with Iran is the right way to go, as these jihadis tend to hate Iran’s Shi’as even more than they hate secular Westerners.

For Princeton University’s Hossein Mousavian, opportunities for increased diplomacy with Tehran have always been there but they simply require the adoption of “a more realistic position” by Western governments. Indeed, abuses of human rights should neither be ignored nor condoned, but dialogue and mediation should always be the first tools for resolving conflict. Not hammering the presidential palace into rubble with airstrikes like Mensch imprudently suggested.

If you want to protest against human rights abuses around the world, there are a number of actions you can take:

– Follow the international news posted on the Canary and support us in our efforts to bring you our critical, in-depth take on events around the world.

– Boycott countries like Turkey that commit human rights abuses by not going on holiday there and not buying their products.

– Join the protests outside the UK parliament on 16 and 17 January calling for the British government to take action over the Turkish state’s genocidal war against its Kurdish citizens.

– Support groups like Human Rights Watch and Amnesty International in their efforts to uncover abuses around the world.