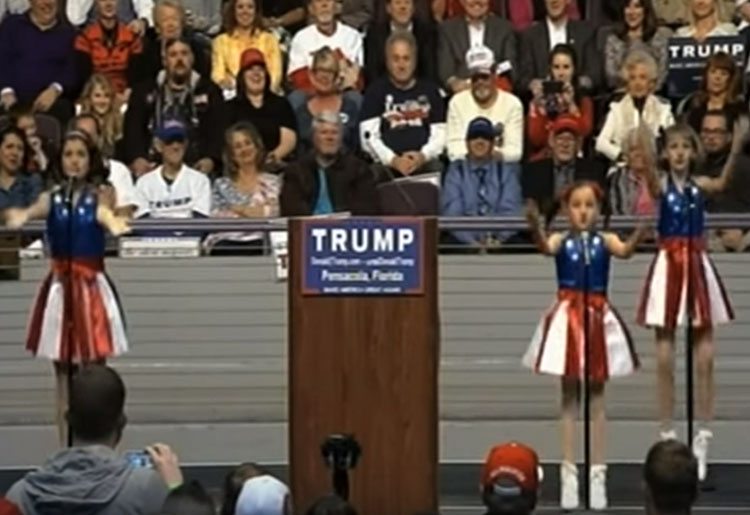 A warm-up act for US President hopeful Donald Trump’s rally is sparking ridicule for its corny, nationalistic lyrics, obvious lip-syncing, and the fact that it is performed by three pre-teen girls.

Some thought it was cute, some had to hold onto their lunch, others just had a chuckle. The rally, which took place in Florida, has invited a great deal of controversy. More controversy than Trump’s hair, which Frankie Boyle described as a “post-coital cat”, more controversy even than his vow to ban Muslims from entering the country; as the White House has pointed out, such a ban would be against the US constitution, and as a policy actually bars him from Presidency.

Just to be clear, this is not meant as a criticism of the girls themselves, but rather of the misguided adults who put them up to this exploitative stunt. Be warned, what you are about to see, should you decide to click PLAY, can never be unseen:

Donald Trump’s brand of right-wing populism has been regularly spewing out mutant offerings (such as these genuinely disturbing comments about his own daughter) since he made clear his hopes for the Presidency. His latest, excruciating bit of pageantry has more than a whiff of the absurd, along with a good measure of the grotesque. We are left with such questions as, “What were their parents thinking?” and, “What’s going to happen when those poor girls look back on this in 10 years time?”

These are scenes we thought relegated to Louis Theroux’s Weird Weekends, never suspecting they would find their way to the heart of US politics. But somehow they have, and they might be an indication of just how unhinged Trump and his fans are.

In both print and social media, numerous references were made to similar performances in the North Korean dictatorship. Though for some, this has caused offence:

In some ways, North Korean political performances involving kids look a lot less creepy, mainly because they are shown doing things that children usually do, like playing basketball and riding bikes, rather than imitating grown-ups by shaking their hips, and rousing the troops with a raunchy, “C’mon, boys”. (The instruction to “Take ’em down!” also sounds inappropriately suggestive, whether intended or not.)

This is the rough equivalent in North Korea, looking more artistic, and far more innocent, despite the sinister regime behind it:

But, jokes aside, the resemblance is marked; parading children around in front of an audience, to advertise one form of authoritarian politics or another, always looks exploitative, and is likely to repel more people than it attracts overall. Do these kids know, or understand, that they are being used to promote a race-baiting xenophobe on the one hand, or a murderous totalitarian state on the other? Unlikely.

No wonder it is causing apocalyptic murmurings far and wide:

This is one of the scariest, surrealistic sequences of images I've seen in years. (Scenes from a dystopian future). https://t.co/7MFSiJvBM4

The Republican elephant in the room is that Donald Trump doesn’t stand for freedom, but for the unchecked power of big-business, the persecution of religious minorities, and for pushing what the majority actually want and think further to the fringes of American political life. In that respect, he’s just a supersized version of what’s already on offer; a former democracy hi-jacked by billionaires, and run almost entirely in their interests.