The Sun may set for final time, as major scandal threatens to knock paper to its knees (VIDEO) - Canary Workers’ Co-op 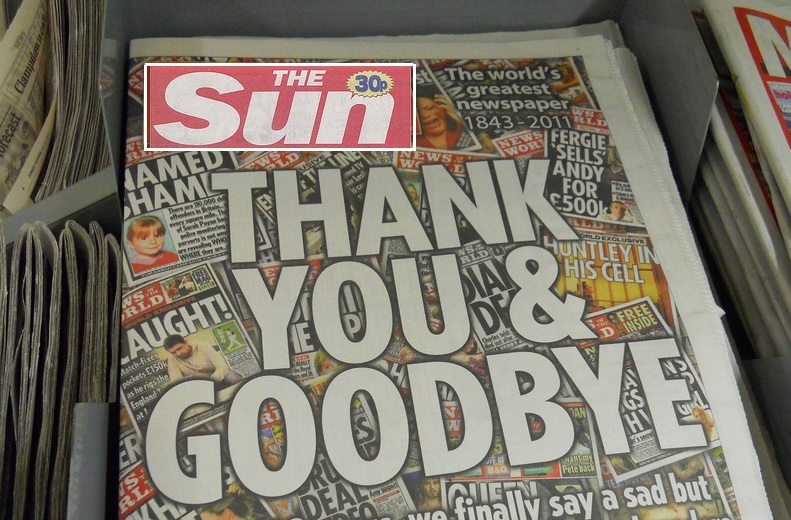 Rupert Murdoch may be in the phone hacking dock once again, this time over claims that The Sun newspaper has also made widespread use of the practice, according to The Independent. The last time the media magnate’s empire was embroiled in a phone hacking scandal, it ended with his News of the World (NoW) title being shut down. So, with a fresh wave of allegations on the horizon, could this be the harbinger of The Sun’s demise?

The new claims were confirmed at a recent High Court hearing by lawyers for News Group Newspapers (NGN), an arm of Murdoch’s UK print industry. News UK – the new name for Murdoch’s News International – has been engaged in a long string of lawsuits following the NoW hacking case, and these have already cost the company more than £300 million. There are further cases due, and seemingly some of these include allegations against The Sun.

As The Independent details, these new claims are largely based on testimonies from previous employees at NGN. Several of these witnesses claim they were:

intimately involved or engaged in these unlawful activities on behalf of NGN, both at the News of the World and The Sun.

The testimonies come from Greg Miskiw, former editor of the NoW, and Paul McMullan, former features editor and writer at both The Sun and the NoW, amongst others.

News UK maintains The Sun’s innocence, but can they be trusted on this?

Although the phone hacking scandal at the NoW broke in early 2011, resulting in the Leveson Inquiry, the first proven use of the practice at the paper was in 2005. As a result, a case was brought against Clive Goodman, the NoW royal editor, and Glenn Mulcaire, a private detective, for hacking the phones of royal aides – and, as was later discovered, members of the royal family themselves.

Both men served time in prison for their crimes and received hefty payouts from News UK. In the case of Goodman, this payment – of £243,000 – was a consequence of his objections to his dismissal from the paper. As detailed in the book Dial M For Murdoch, Goodman wrote to News UK, arguing:

The decision is perverse in that the actions leading to this criminal charge were carried out with the full knowledge of [names redacted]…the Editor promised me on many occasions that I could come back to a job at the newspaper if I did not implicate the paper or any of its staff in my mitigation plea.

News UK vehemently denied Goodman’s assertions that others knew about the hacking but paid him the extensive payout regardless. He has remained mostly silent since. However, Goodman’s contention was supported by evidence seized in that investigation. This evidence, now famously known as the ‘For Neville‘ email, confirms that phone hacking was rife at the NoW – not limited to Goodman as a ‘rogue’ reporter – and senior staff knew about it.

The ‘For Neville’ email led in 2008 to a huge payout to Gordon Taylor, the boss of the footballers’ union, in exchange for his silence as the target of that specific hacking. It did not, however, lead to the highest ranks of NGN owning up to their culpability.

Although – following these initial criminal findings – numerous investigations had been undertaken by a number of bodies including the police, the Information Commissioner’s Office (ICO), the Press Complaints Commission, and parliamentary committees, no major steps were taken to condemn, or curb, the suspected widespread hacking at NGN, or other media outlets – until the hacking of Milly Dowler’s phone was exposed in 2011.

The police, for their part, largely maintained that there was no endemic phone hacking taking place in the tabloid press. This has been attributed to collusion between members of the force and the newspapers in question, as actor Hugh Grant explains here:

In addition to speaking on police collusion, Grant identifies the same collusion with government officials, who “need these tabloids, especially the Murdoch press, to get elected”.

When it turns out that Osborne was wining and dining with Britain’s major media moguls on the very same weekend that Corbyn won the leadership election, such connections between parliament and the press become hard to ignore. In the case of the Conservative government, the closeness between its leading figures and executives at Murdoch’s empire are undeniable – as was true of Tony Blair previously.

One parliamentary figure who most certainly is not in the pocket of the Murdoch press, however, is Tom Watson. Labour’s new Deputy Leader has a long history of challenging the organisation on the ethics and legality of their enterprise. His dogged pursuit of the media powerhouse – in his position on the Culture, Media and Sports Committee – seemingly inspired a vendetta-style reaction from News UK in the past – a situation that sends a chill down the spine of most politicians. As detailed in Dial M for Murdoch, Alastair Campbell claims that, in 2009, Rebekah Brooks (then Wade) told him

that so far as she was concerned, with Tom Watson it’s personal, and we won’t stop until we get him.

Rebekah Brooks, the editor at various Murdoch titles and current now chief executive of News UK, was cleared in 2014 of criminal charges in relation to the NoW hacking scandal. These new allegations pertaining to The Sun, however, may draw her into another legal battle as she was editor of the paper at the time. With Watson now in an extremely influential position in the Labour party, it is possible that these fresh claims could bring press standards back into the spotlight – in the courts and in parliament.

Reportedly, the judge in the case will make his decision by Easter on allowing the claims against The Sun to be heard. If allowed, the accusations could have much the same effect on The Sun as it did on the NoW, diminishing the paper through substantial legal damages, loss of trust and advertising revenues. News UK has pledged it will “vigorously” defend itself. The battleground, it seems, is being set.

Image via JD (The Sun logo) and Mikey