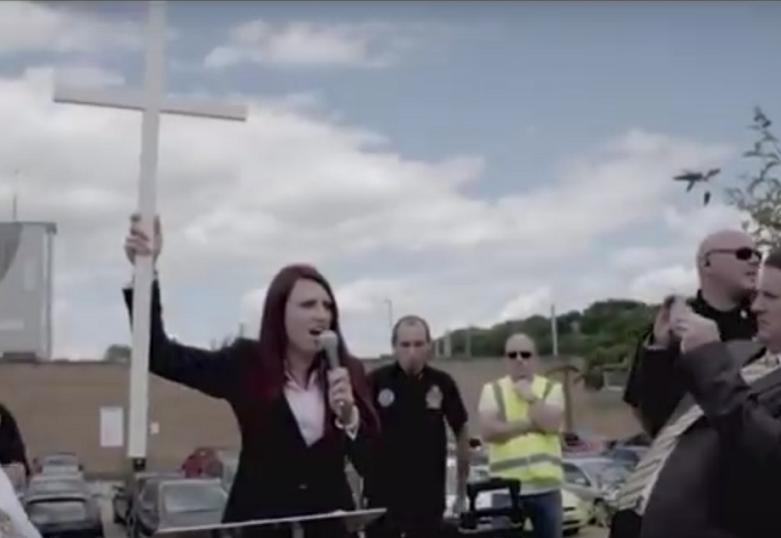 Jayda Fransen, deputy leader and would-be ‘poster-girl’ of Britain First, has threatened that Britain must face the prospect of ‘civil war’.

Her reckless comments come after a confrontation in Luton at the weekend, between Britain First activists and the local Muslim community. The activists had been there to carry out what they called a ‘Christian patrol’, but were chased off by local residents. Britain First claims that the activists were pelted with eggs and verbal abuse, and put a video up on YouTube as evidence. How selectively the video may have been edited is unclear, but the unnecessary ominous music track added is unsubtle enough to raise doubts. (WARNING: Bad language.)

The title referring to Luton as an ‘Islamist hotspot’ is clearly inaccurate, as the words ‘Muslim’ and ‘Islamist’ are not interchangeable.

Fransen gave an interview to the International Business Times in which she insisted that Britain First does not spread hate. This claim is very hard to reconcile with her suggestion that civil war is on its way, and that Britain First’s activities are what will bring it about:

People can expect a large amount of action for 2016, it’s going to be our year. We have so much planned and there are now so many people in our group at an activist level. Our country and Europe is heading for a civil war. Our leaders have sold us out and the way to save us is to head for the streets.

Fransen has also referred to Islam as “a cancer of the world”, and insisted that if you agree with Islam, “you are an extremist”. Her one-eyed supporting argument does nothing to raise the remark above the level of abuse. It was a clear attempt to influence the wider public into feeling animosity, thus an attempt to spread hate.

Islam was created by an extremist. His name was Mohammed and he was a mass murderer, rapist and a pedophile who instructed others to mercilessly kill anyone who did not accept him as the ‘Messenger of God’.

The point of interest is that Fransen and her allies used symbols of Christianity, including clumsy-looking large crosses, while marching. The group is more and more explicitly presenting itself as a religious crusade, and acting in the name of Christianity. So perhaps Fransen should consider that Paul The Apostle, the putative founder of organised Christianity, was himself a mass-killer before he converted to the cult of Jesus. The people he persecuted and killed while still going by the name of Saul of Tarsus? Christians.

Whether we agree with Fransen’s views on Mohammed or not, she is applying a clear double-standard. Mohammed, just like Saul, was a man of his time – very primitive and bloody times. Anyone agreeing wholesale with the worldview of either Saul or Mohammed is opening themselves up to accusations of being an extremist. An outright anachronism even. And carrying large crosses around does rather make these ‘Christian patrols’ look like medieval holy men on the Crusades.

Jayda Fransen, when viewed by her very own standards, is herself an extremist.

Fransen and Britain First are thus showing hallmarks of outmoded Christian imperialism. Their desire to force Islam out of the country has little to do with freedom, and everything to do with territorialism. Victimising peaceful communities with threats of civil war is certainly not going to increase the freedom of anybody else. To refer to Britain as a Christian nation, as Britain First activists do, is to live in the past, as Baroness Butler-Sloss concluded after a two-year study before Christmas. For Fransen to claim the country on behalf of Christianity is more of an act of ‘colonisation’ than anything British Muslims have supposedly done.

If we take Fransen at her word, there are many more Muslim-baiting activities ahead this year. If you wish to help efforts to rein them in, there are a few things you can do:

Featured image via screencap from Exposing Britain First on YouTube