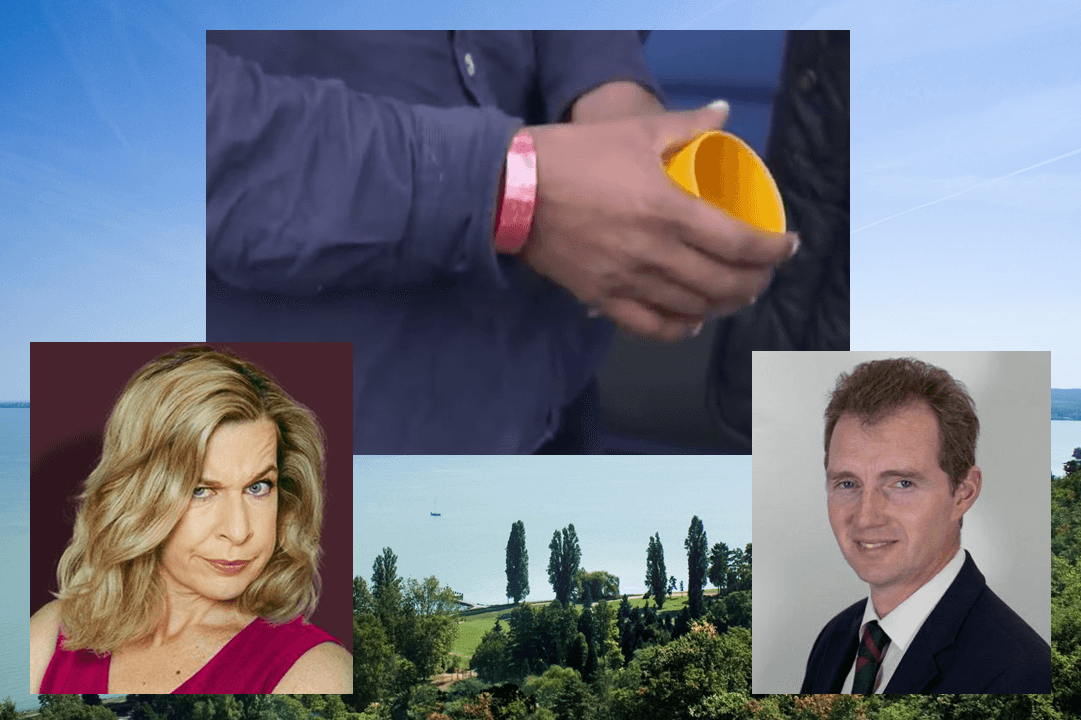 Asylum seekers being forced to wear a brightly coloured wristband in order to get food is no different from the arrangements in place at cushy all-inclusive holiday resorts, according to Conservative MP David Davies and professional irritant Katie Hopkins.

The wristband policy was in place at Lynx House in Cardiff as a way of identifying asylum seekers who were entitled to receive free meals. However, a number of people said that the bands had made them the target of abuse and name calling. The situation bears resemblance to the policy in Middlesbrough of housing asylum seekers behind distinctive red doors. Both cases have seen a strong reaction, with comparisons made to the Nazi policy of forcing Jews to wear yellow felt Stars-of-David for identification. Local Labour MP Jo Stevens spoke out against the practice:

But David Davies, the Tory MP for Monmouth, ridiculed the concerns and said that he and his family had to wear wristbands on their holiday to picturesque Lake Balaton in Hungary (pictured above) “so people couldn’t just walk in off the beach to claim a free meal”. A regular critic of immigration, Davies suggested that if an asylum seeker was bothered about a wristband:

That doesn’t sound as if he was suffering very much where he came from, and perhaps he’d be better off going back there.

Katie Hopkins offered a very similar viewpoint in her regular Daily Mail rant. She didn’t specify the location but said that her kids loved the feeling of getting something for nothing when they flashed their wristbands. And of course, that’s what being an asylum seeker is like. After spouting all the usual nonsense about migrants only coming to the UK because of the free stuff on offer and nobody deserving to eat unless they’ve worked for it, she attempted to counter the fact that asylum seekers are ineligible for work. That’s no argument, she contends, because all refugees should actually stay in their countries of origin and fight. Goodness knows how but in some strange way she seems to think the one thing that would improve matters in Syria (apparently refugees can’t come from anywhere else) is more fighting.

What these self-righteous witterings completely fail to grasp is that the issue isn’t to do with wristbands. Wristbands are fine, if you’re choosing to wear one in support of a charity, or because you’re trying to keep the Glastonbury buzz going for a few hours longer. Wearing a jaunty yellow star on your lapel would be fine if it was obviously just a yellow star and nothing else.

As Plaid Cymru’s Leanne Wood explains very clearly and patiently to a rather befuddled Adam Boulton below, the wristbands were most likely introduced with no ill intent. However, they’ve had the effect of making a vulnerable group of people more instantly recognisable, which has unfortunately led to victimisation.

Happily, the wristbands (apparently introduced as a cost-saving measure by the contractor used by the Home Office) have been withdrawn following the outcry. Refugees are facing enough obstacles, often driven by fatuous myths, without drawing hostile attention to them. Common decency demands they should be given every opportunity to live safely from day to day, without harrassment. Hopefully those involved in providing services will think twice before employing measures that set refugees apart and tag them as targets for bullies, racists, Tory MPs and, worst of all, Daily Mail columnists.

– Have you got a local refugee support group? Join it or start one.
– Speak out if you see this kind of labelling going on. It makes a difference. Two harmful policies have been reversed in a week.
– Be excellent to each other. Simple kindness and hospitality means more than you will ever know to people who have risked and lost everything.