As peace talks begin in Syria, these two things are essential for success - Canary 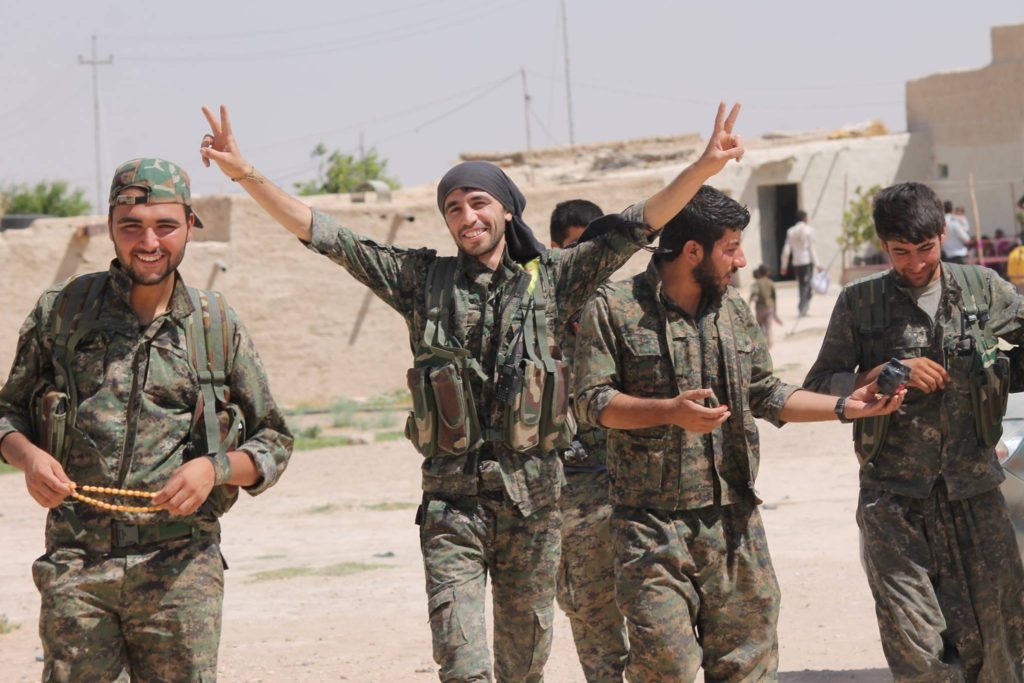 On 29 January, the UN plans to begin peace talks to end the civil war in Syria. But one NATO member has sought to undermine the process before it has even begun. And unless the two issues mentioned in this article are addressed by the international community, the Syria peace talks have little hope of succeeding.

According to UN special envoy Staffan de Mistura, the negotiations will take around six months, and the priorities are to:

But these objectives will only be achieved effectively under the following two conditions:

1) Representatives from Rojava MUST be present

In northern Syria, militias with a secular, gender egalitarian, and directly democratic ideology began to forge a self-governing community called Rojava in 2012. The Kurdish-led forces of the YPG/YPJ have since protected the region from Daesh and other jihadi groups. In October 2015, the YPG/YPJ joined together with other forces which believed in pluralism and democracy to form the Syrian Democratic Forces (SDF).

But not everyone thinks Rojava-led forces should be present at the Syria peace talks.

While Russia believes Rojavan representatives should attend the negotiations, the main representatives backed by the west and its regional allies come from Jaysh al-Islam – a powerful Islamist group led by Mohammed Alloush. David Cameron has even admitted that some of his “moderate rebels”, in a country where around 60% of anti-Assad fighters are said to have similar ideologies to Daesh, are “relatively hard line Islamist groups”.

Although Rojavan forces and their allies in the newly-formed Syrian Democratic Council (SDC) wish to participate in the Syria peace talks, they’ve claimed that the Islamist delegation backed by Saudi Arabia and Turkey contains elements which are “against a political solution” and will simply “sabotage the talks”. At the same time, they stress they are:

Fortunately, EU foreign policy chief Federica Mogherini has insisted that the negotiations should be “inclusive”, and a German foreign ministry spokesman has stressed that Kurds have “the right to take part”. And judging by the failure of previous peace talks – to which Rojavan representatives were not invited – a more inclusive approach is definitely overdue.

Because the Islamist rebels (along with their Saudi and Turkish backers) oppose the secular ideology of Rojavan forces, however, they have threatened to boycott the Syria peace talks if the latter are present. Turkey’s foreign minister Mevlut Cavusoglu has even called the YPG/YPJ “terror groups”, a claim not supported by any evidence.

And this brings us to the second point.

2) Turkey MUST return to the real world

In July 2015, the ruling party in Turkey broke off a peace process with the left-wing PKK (Kurdistan Workers’ Party) after it failed to win June’s elections outright. It had previously been criticised for supporting Daesh and blockading Rojava (whose democratic experiment had been inspired by the PKK). Turkish authorities have since murdered at least 162 civilians in Kurdish communities,  and Amnesty International has referred to their actions as “collective punishment“.

Ankara claims it is only fighting terrorists. But in the last few months, it has focused on:

Unsurprisingly, the official Turkish line is different. But Emre Uslu at Turkish daily Today’s Zaman has criticised Turkey’s prime minister Ahmet Davutoğlu for “living in a parallel world” – consistently contradicting reality with his statements. While Davutoğlu throws around the word terrorism for Daesh and the PKK equally, for example, the truth is that the PKK does not target civilians when retaliating against Turkish attacks and has consistently called for peace – in significant contrast with Daesh. The PKK’s allies in Rojava, meanwhile, have insisted:

Does that really sound like something terrorists would say?

But Davutoğlu is not stupid. His main aim is simply to delegitimise his political opponents. By waving the word terrorism around like a Daesh flag, his regime seeks to get away with murdering civilians, imprisoning its critics, and escalating a domestic conflict that can only be resolved through political reform. Instead of convincing the world of its righteousness, however, the Turkish state has come to embody the terrorism it talks so much about. In fact, renowned academic Noam Chomsky has spoken openly about Turkey’s “terrorist war” against Kurdish communities. And he is not alone.

Herein lies a big problem for the resolution of the Syrian civil war. Turkey is increasingly becoming, as Murat Aksoy says at Today’s Zaman:

a source of troubles rather than a partner [for] the West

In short, the longer western governments try to justify the indefensible policies of their Turkish allies, the longer conflict will plague the Middle East. And the more they refuse to recognise the positive role played by Kurdish-led democratic movements in the region, the more forces like Daesh will gain ground. But if pressure is placed on Ankara to pursue a political settlement both domestically and internationally, the Syria peace talks may well succeed.

Support the campaign to boycott Turkey.

Ask the British government to change its stance on the PKK by signing this petition.

Write to David Cameron and your MP to ask them to push Turkey to stop its war on the PKK and Rojava.