Jess Phillips is right about the Cologne attacks, and here's why (VIDEO) - Canary 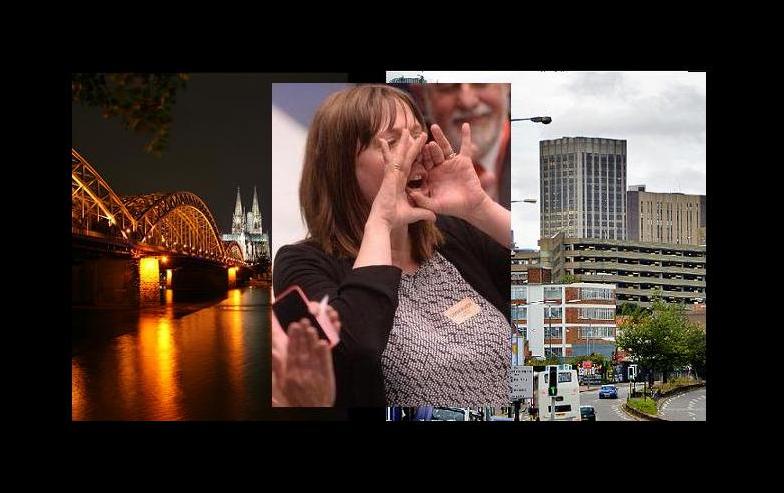 Jess Phillips MP, not for the first time recently, has become the centre of controversy due to a public remark she has made. On the BBC’s Question Time panel discussion programme on Thursday, the Labour MP was discussing the ugly wave of sexual assaults in Cologne at New Year. The assaults were understood to have been carried out by gangs of refugees, mainly from North Africa. Anti-asylum groups across Europe have seized on the Cologne attacks to demand that borders be closed to asylum seekers from the troubled region; see some of the remarks in the comments section here.

Phillips suggested that the assaults were comparable to every week on Broad Street in her native Birmingham. The remark has triggered considerable outrage.

Partly, there has been great offence taken by her fellow Birmingham citizens, many of whom think it a slur. Inspector Gareth Morris of the West Midlands Police retorted,

There is certainly nothing to suggest any crime patterns or trends related to immigration and I would invite anyone to come and enjoy a night out in Birmingham and experience what the city has to offer.

But also, the remark has been interpreted in some quarters as making light of what happened in Cologne.

However, I am very confident she was neither insulting Birmingham, nor shrugging shoulders about the Cologne attacks. Quite the opposite in fact.

Here is a video of what she said; –

Here is a transcript of the key part of what she said:

There is violence against women and girls that you are describing. A very similar situation to what happened in Cologne could be described on Broad Street in Birmingham every week where women are baited and heckled.

Now in fairness to the people expressing outrage, Phillips is guilty of overstatement with this comparison. It is estimated that there were around 800 sexual assaults in Cologne on New Year’s Eve, including, most distressingly, three actual rapes. That would be a horrifically extreme evening if it ever happened in Birmingham. But what Phillips was referring to was less the physical events, and more the similarity in the culture and atmosphere.

Sexually intrusive behaviour in European countries tends – only tends please note – to be less extreme than what was seen in Cologne. And yes, women are largely treated better in Europe than in the Middle East. But even so, the masculine culture in Europe remains dominant and aggressive. Women still often face considerable intimidation and persistent unwanted advances from men, which is wrong in itself. Women endure unwanted remarks from men. They get touched intrusively by men all the time. They get groped against their wishes. These ‘count’ as sexual assault as well, and yet many Western men still fail to recognise it. In fact, 1 in 5 women aged 16 – 59 has experienced some form of sexual violence since the age of 16 and approximately 85,000 women are raped every year in England and Wales alone.

I have seen claims, including from a German friend of mine, that the assaults in Cologne were a symptom of the refugees’ ‘Islamic culture’, and that we should not want that culture here. But as sexual assault has remained so commonplace in Europe with or without the refugees, surely that is a nonsense argument? Sexual predators may be more cautious (or more sly?) in Europe, but they are as much a part of ‘our’ culture as anyone else’s. Sending away the refugees will not send away the culture of violence against women, because we already had it long before refugees arrived.

That, I think, is the gist of what Phillips was saying. She was warning that we in Europe need to stop being so holier-than-thou about the Cologne attacks. They were absolutely abhorrent, but we need to stop pretending that they were really that far removed from what happens here all the time. We also need to stop pretending it happened because the refugees are Muslims/Middle Eastern/North African. To use the same word Phillips did, we have plenty of our own ‘patriarchal’ hangovers in the West, including rape culture, and we have a long way to go to put an end to them.

Moreover, the way the right has leapt on what happened at New Year has been disproportional in two respects.

Firstly, demanding Europe’s borders be closed to other refugees because of assaults committed by people who are already here makes little sense. While a practical case might be made for such a move, as policing fewer people would be easier, on a moral level it simply punishes people who could not have committed the crime.

Secondly, it is also missing that 800 assaults among the 1.1 million asylum seekers understood to be in Germany is in fact a very tiny ratio. Even one such assault is still totally unacceptable of course. However, to use the Cologne attacks to portray the majority of refugees from North Africa and the Middle East as ‘inherently criminal’ is clearly ridiculous. If the behaviour of refugees were routinely so bad, Germany would be in a state of complete chaos at the moment. The men who committed the assaults were the exception, not the rule.

As for the denials from people in Birmingham, they are taking the remark too personally. Phillips’ comparison equally applies in other big British cities. It would be just as true of Sauchiehall Street in Glasgow. Of Deansgate in Manchester. Of Ranelagh Street in Liverpool. Of Shields Road in Newcastle. Of any of dozens of streets in London. Phillips was just making the uncomfortable point that there are echoes of the Cologne attacks in places close-to-home. Replication, no, but points of resemblance. She just happened to choose Broad Street in Birmingham because that is her home city.

Phillips was very wrong a few weeks ago to suggest that Jeremy Corbyn is guilty of ‘misogyny’ (does she even know what the word means?), but she is right about this. When it comes to curbing aggression against women, European culture sets a pretty low standard by which to measure.