If you hate being stuck in traffic jams, then you will love these cars - Canary 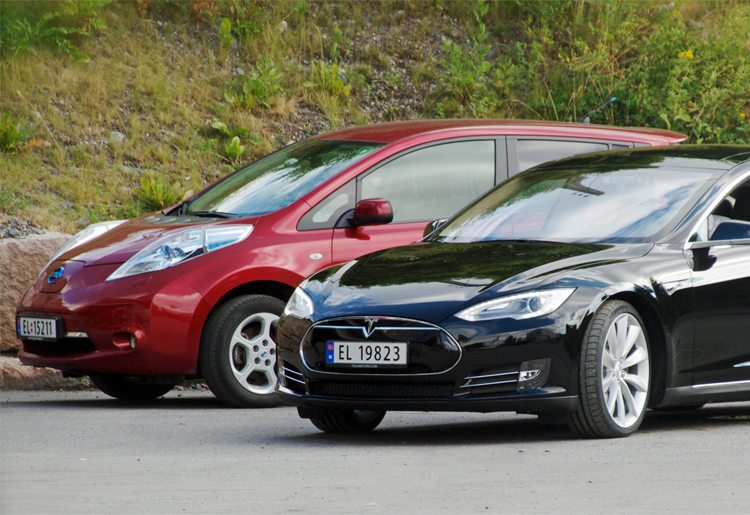 Cities in the UK are giving electric vehicle (EV) drivers the chance to beat the rush hour by using bus lanes. This comes as part of a package of measures to encourage the use and sale of electric cars. Having won the Go Ultra Low City Scheme, four towns and cities – Bristol, London, Nottingham, and Milton Keynes – will share £40m in prize money.

In addition to the incentives on the use of bus lanes, which will roll out in Derby and Milton Keynes, there are plans for a variety of other schemes described as “exciting and innovative” by transport secretary Patrick McLoughlin. They include a leasing scheme for EVs, free parking for EV drivers, and street lamps that double as charging points.

The decision to turn bus lanes into ‘green lanes’ is inspired by similar initiatives in Scandinavia. Norway has had the most success, leading to an explosion in electric vehicle sales and usage. Today, 1 in 5 new cars bought in Norway are electric.

This was so successful, in fact, that by March 2015 there were so many electric vehicles on the streets of Oslo, and more specifically the bus lanes, that the Norwegian government was forced to repeal the initiative. This was partially because EVs are not subject to sales taxes and VAT, and the Norwegian government was losing out. But the turnaround has not stemmed the tide of new buyers looking to electric cars.

In the UK, the response to the announcement has been welcoming, but reserved. Steve Gooding of the RAC foundation has said:

We are all in favour of encouraging drivers to go ultra-green, but the risk of relying on perks such as access to bus lanes, free parking and exemption from London’s congestion charge is that they can be at odds with other policies such as promoting public transport and easing congestion

But we need to understand that the purpose of such incentives is just to get the ball rolling, and that once significant numbers of people are driving electric vehicles, as in Oslo, perks are no longer necessary.

Issues such as these pale in comparison to the problem of CO2 emissions and air quality. London consistently breaks the legal limits for safe and acceptable air quality, having expended its annual allowance for Nitrous Dioxide levels in just one week.

A threat looms larger than even the safety of the air that we and our children breathe. At the climate summit in Paris in late 2015, world leaders overwhelmingly accepted the scientific consensus on man-made climate change and the need for action. But despite unanimous agreement, we are seeing only timid moves to cut emissions.

Many will be applauding the schemes taking place in cities across the UK as the first green shoots of an environmental transformation that sorely needs to occur. But others will point to the record of the Tory government and ask if this is not mere lip service. While the measures planned by the Go Ultra Low City Scheme are definitely a step in the right direction, and will no doubt lead to more people taking green steps such as installing solar panels and driving electric cars, we need real commitment from the government as well.

-Get solar panels for your home, business, or charity.

-Become the proud owner of an electric vehicle.

–Write to your MP telling them that a commitment to combating climate change will sway your vote in 2020.