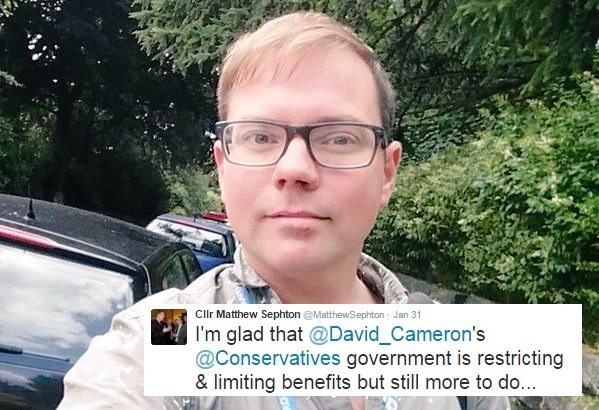 The council member for Altrincham said he was “glad the government were restricting and limiting benefits”, but added David Cameron “still had more to do”.

He tweeted his comments with a picture of a spoof advertisement featuring the slogan: “England – The Welfare Country” in a nod to the perceived leniency of the UK welfare state.

It makes light of families who have “received benefits for two or three generations” in an ironic bid to attract migrants looking to move to the country “where only suckers work”.

His tweet has sparked outrage among his followers who have blasted the Conservative Greater Manchester Council member as “pathetic” and “uninformed”.

One posted: “You really have no knowledge of welfare or poverty whatsoever do you? Pathetic, uninformed and crass rubbish.”

While another tweeted: “Amazing level of vileness.”

The Stockport teacher found himself in hot water last year for tweeting “disgusting” comments claiming migrants who refused to stay at refugee camps were “ungrateful”.

Mr Sephton tweeted: “If migrants refuse to get off train at refugee camp they should be transported directly back from where they came #RefugeeCrisis #ungrateful.”

The councillor’s comments are symptomatic of the Tory sanctioned culture of blame and cynicism surrounding benefits claimants, the welfare state and beyond. From New Labour’s supposed frivolous public spending to the European question of mass immigration, David Cameron’s well-oiled spin machine has constructed a convincing enough narrative to secure tacit permission from the electorate to restrict handouts.

If populism has taught us anything, it’s that sowing the seeds of resentment can have big political payoffs. History has shown as much; just ask recent proponents of the craft Nigel Farage and Donald Trump, whose respective talents to tap into these sentiments has paid dividends.

But when blame is harnessed in the form of benefits bashing, as in the case of Mr Sephton, the economic contradictions of the government’s tough stance on shirkers is where the populist argument is lost.

We know multinational companies are diverting an estimated £95 billion a year offshore. Yet, they’re allowed to do so in ever greater numbers and with ever greater autonomy. Conversely, we know benefit fraud accounts for a fraction of this at £1.2 billion a year (or 0.7% of the welfare budget). Furthermore, just 14% of public spending goes on benefits for those of working age, according to the Institute of Fiscal Studies. Yet,  honest benefits claimants are picked on in ever great numbers with ever greater vigour.

By these estimates, tax avoidance and evasion outweighs benefit fraud eightyfold. But the target of the rhetoric – “scroungers” and “benefit cheats” – aren’t the flush corporate giants with their sticky fingers in a multitude of offshore pots. It’s those at the bottom of society who rely on the benefits system as a last resort.

It’s true that this effective tax rate does create a disincentive to work for those on low pay. In some cases, those on low pay are behaving rationally in deciding not to work. But this is a failure of the system, not of society and its people. For Mr Sephton, it’s easier to tap into the preconceptions of his Twitter followers by deriding all claimants as free-loaders than to challenge the root causes of welfare dependence and the gross inequalities of the tax system.

Put simply, at a time when the Google tax deal row has dominated the headlines, Mr Sephton’s misrepresentation of the welfare state is nothing more than a callous sideshow.