Driverless cars could give the UK a boost, but they won’t fix the potholes - Canary 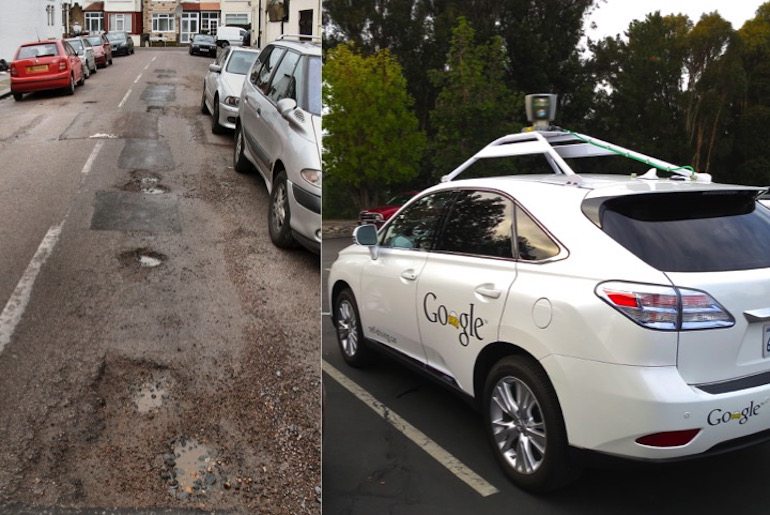 This week the government announced it will be road-testing driverless cars in Coventry next year, in a bid to get ahead with automated transport technology. But at a cost of £20m, is this really a good investment, especially when the country’s roads are in such bad condition they could damage the new cars?

The £20m investment, which will be spread across eight projects, is part of a bigger £100m pot – the Intelligent Mobility Fund – to drive the technology forward. One of the projects will involve testing automated Jaguar Land Rover cars on 41 miles of roads in the Coventry and Solihull area, called the “Connected and Autonomous Vehicle Corridor”.

Driverless cars might not be swamping the streets just yet (at least not in Coventry), but it’s likely they soon will be. As Professor Murray Shanahan from the Leverhulme Centre for the Future of Intelligence explained in an interview with Nancy Mendoza:

… the technology is already in place and it’s not far from being available to consumers. Even if cars are not, in the near-term, fully self-driving, we’re certainly going to witness increasing autonomy of cars over the next few years.

Part of this first stage is about making sure it’s safe, which seems to be a sensible thing to do if the cars are destined to arrive one way or another.

Once the technology arrives, it’ll have big social and environmental benefits: emissions will be lower because the cars will be better than humans at driving efficiently, and there will be fewer accidents.

Business secretary Sajid Javid, who talked about the project at MIRA Technology Park in Nuneaton on Monday, said:

Our cars of the future will be equipped with the technologies that will make getting from A to B safer, faster, and cleaner. They will alert drivers of accidents ahead and be able to receive information from their surroundings about hazards, increasing the safety of drivers, passengers and pedestrians.

And the economic benefits are potentially even bigger. The intelligent transport market will be worth an estimated £900 billion a year by 2025, and getting in on the action early means the UK can establish itself as a technological leader and claim a piece of the pie. As Javid added:

Britain is a world-leader in research and development in such innovative technologies which improve lives and create opportunity for all. That is why this government has protected the £6 billion science budget and is providing up to £20 million for these projects.

Despite all the benefits, it’s difficult to swallow the investment when roads are falling to pieces around the country – including in Coventry, where these first tests will take place. Last June, roads were at risk of being closed in the city because “unprecedented cuts” meant the council was potentially unable to pay for repairs.

A report by the Local Government Association revealed the country-wide problem:

Even if no increase in traffic levels were forecast, the condition of Britain’s roads is rapidly approaching crisis point – indeed in some areas the crisis is upon us… The current backlog of road maintenance would cost £12billion to fix and would take around ten to 12 years to clear. That sum has grown over recent years so not only do we have a backlog which would take over a decade to eradicate, but that backlog is growing.

As if the pothole crisis wasn’t enough, the recent floods have added astronomical costs to the repair and maintenance of roads in Cumbria. Even with emergency funding and accelerated repairs, some roads won’t be open again until May this year.

Will the return on investment from driverless cars be able to dig the government out of these holes? Not if Google’s experience is anything to go by. According to Mashable, Google lost more than $3.5 billion investing in its “moonshots” – big projects that include robotics and driverless cars.

Incrementalism leads to irrelevance over time.

So maybe shooting for a leadership position in this cutting-edge technology will bring great returns to the UK in the long term. But we’ll have to wait and see whether it will help fill the holes in our roads.