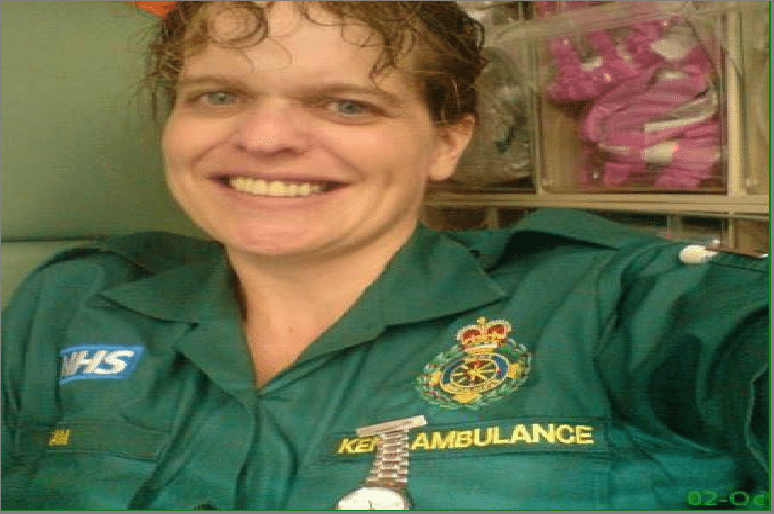 Impassioned paramedic Sandra Paynter took to social media to express her concern with the working conditions being imposed on junior doctors in the NHS by this government.

She recounted how junior doctors have saved her life twice, in the middle of the night and at the weekend.

Jeremy Hunt recently announced that he would be imposing his contract on junior doctors. This is part of the Conservative’s plan to privatise our NHS because the strategy is totally incompetent as a product of a cohesive motive. And the Conservatives are not incompetent, they are just disingenuous.

Hunt is ostensibly trying to deliver a ‘truly’ 7-day NHS, but he’s offering nowhere near enough extra funding or staff. Within the context that NHS demand for emergency services is up 3.6% while funding is only up 1%, this contract will only serve to push a public institution that is already unsustainable, further towards breaking point.

This will serve to create the conditions by which privatisation seems the only option for a functioning health service. Back in 2012, the NHS was legally abolished as a public institution under the Health and Social Care Act, opening it up to increasing privatisation ever since. Accordingly, many of the profiteers would be Tory parliamentarians themselves, who have vested interest in private healthcare. Back in 2005, Jeremy Hunt co-authored a book, with other prominent Tories, calling for the NHS to move to an insurance-based system.

In her post, Paynter recounts how junior doctors saved her life twice at the weekend, despite being squeezed by this government: 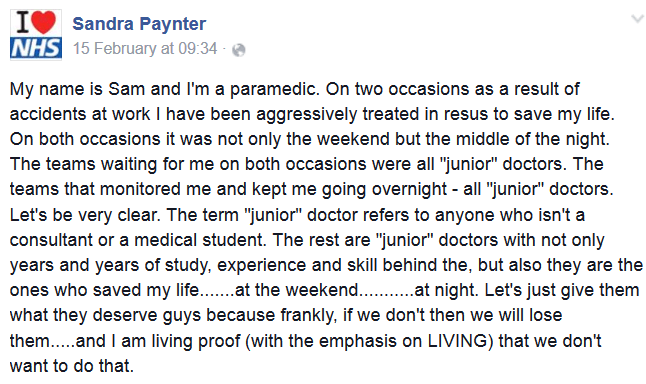 Through emphasising that ‘junior doctors’ is a very broad term, Paynter alludes to the criticism that the government and much of the media have chosen not to. When people hear the phrase ‘junior doctor’ it paints a picture of young graduates who have just started their profession. What hasn’t been emphasised enough is that junior doctors can be ten years into their medical career. Many have done a second degree, had a previous career and are in their mid-thirties.

With squeezed funds and an overstretched workforce, Paynter’s story is an example of the junior doctors doing a brilliant job in the face of such pressure. Tory austerity is a threat to the safety of patients. The Tories are demanding a better service while not providing nearly enough funds or staff.

At the hands of the Tory leadership, we have a financially unsustainable institution, an imposed contract squeezing already overworked public servants, a book on NHS privatisation, and a relentless austerity agenda. We have the external political motive to appease the rich multinationals dwelling in the polarised private sector, who bankroll the party, and the internal motive of many MPs who have links to private healthcare. As always, the wider picture extinguishes the Tories’ smoke and mirrors, leaving ‘Operation Privatise’ totally naked.

-Express solidarity with the junior doctors on Twitter with #JuniorDoctorsStrike.